With the regular season over, our focus has shifted to the offseason. For the next few months, I’ll be providing scouting reports on prospects. Some the Pittsburgh Steelers may look at and other top players that will be off the board before they select. All to make you as prepared as possible for the 2014 NFL Draft.

The first wide receiver I’ve scouting in this class. Player I said I was excited to take a look at in my notes. Vanderbilt’s Jordan Matthews.

– Great frame, big body that he fills out well

– Overall, a natural catcher who can pluck the ball away from his body, especially in traffic

– Willing to go across middle, willing to sacrifice his body for a catch

– Size allows him ability to go up and win jump balls

– Length/size helps him as a run blocker

– Versatile, lined up all over the place on offense (X, Z, slot, variety of splits) and used on reverses/end arounds

– Struggles to gain separation vs man coverage, has trouble sinking his hips and staying fluid through his breaks

– Some mental lapses, drops some easy ones

– Needs to sell shorter routes better, can get lazy at the top of his stem and ease into the route

– Doesn’t put a lot of effort into his run blocking, lacks aggressiveness

– Didn’t have to beat press coverage

– Good explosion for his size but not truly dynamic

– Team captain as a senior in high school

– Vanderbilt only D-I school to offer him scholarship, first player from his high school to play D-I

I’ve mentioned it multiple times but have to again point out his measurable and triangle numbers. Very solid. Well put together at just over 6’3, 212, with long arms and big hands. If you were building a wide receiver from scratch, he’d look awfully similar to Matthews.

Some have billed Matthews as a strict possession receiver. But that simply isn’t the case. He may not be a true burner but he’s shown explosiveness and his long strides give him a second gear.

See that second gear going across the middle against South Carolina. Makes the catch, turns, and shoots up to top speed. Gains a lot of YAC.

But he has traits of a possession receiver. Big, soft hands and can pluck the ball away from his body. Impressive catch radius.

Jumps, plucks the ball out of the air, immediately gets up to speed, and racks up another 15 yards in YAC.

As I noted, great hand/eye coordination.

This may be my favorite catch I watched of his. And it needs some context. Week One against Ole Miss. Commodores down by four with two minutes left. Earlier in the possession, he takes this hit going across the middle. Also shows his willingness to sacrifice his body. Not scared to go over the middle.

Didn’t take notes at the time but remember watching it. Due to the pain of the hit and the hot day, Matthews ends up throwing up on the field. Misses just two plays.

Same drive, 4th and 18 for Vanderbilt. Game on the line. Matthews does this.

You can bet that earned a ton of respect from everyone watching.

It should be noted that later in the game, Matthews did let a pass slip through his hands that turned into a game-sealing INT for Ole Miss.

Against Houston in the bowl game, an over the shoulder, one-handed grab. Superb concentration and ability to track the ball while maintaining speed.

On the negative side, he won’t always use both hands to go attack the football. Sometimes will reach out with just one hand and make the spectacular catch. Not that I believe him to be a diva. Just something he’s been able to get away with and won’t at the next level.

Plus side is seeing his physicality on his route. Not afraid to use his size and try to create some separation.

Matthews lined up in the left slot here against Missouri. Runs a dig but has trouble bending for a quick cut. Can’t get separation.

He’s not a “natural” separator who has to rely on size and the nuances of route running to create that. Luckily, he does that well already.

One area he can improve though is selling deep on short routes. Gets lazy on the top of his stem on this curl.

Should be exploding off the ball, chopping his feet, turning quickly, and showing his numbers.

One other plus is his versatility. Vanderbilt lined him up all over the place. As the “X” “Z” and in the slot. Lined up outside the numbers to a nasty split in bunch formations. Has experience playing everywhere. 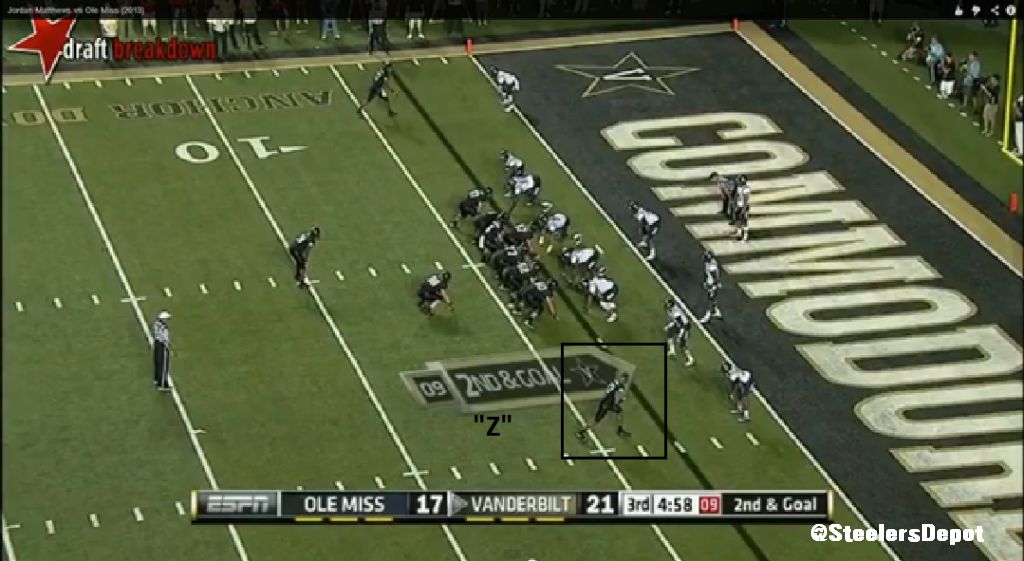 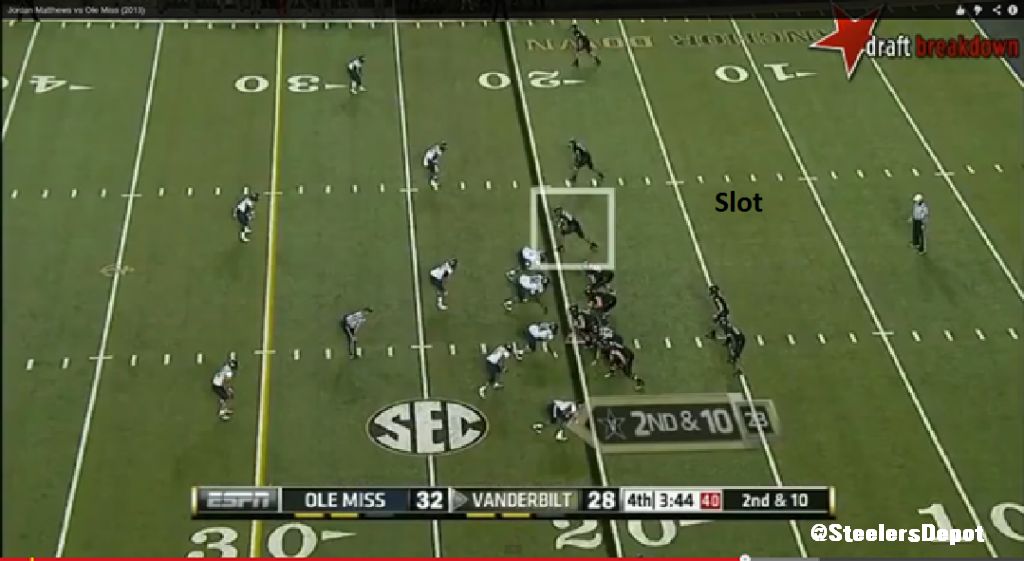 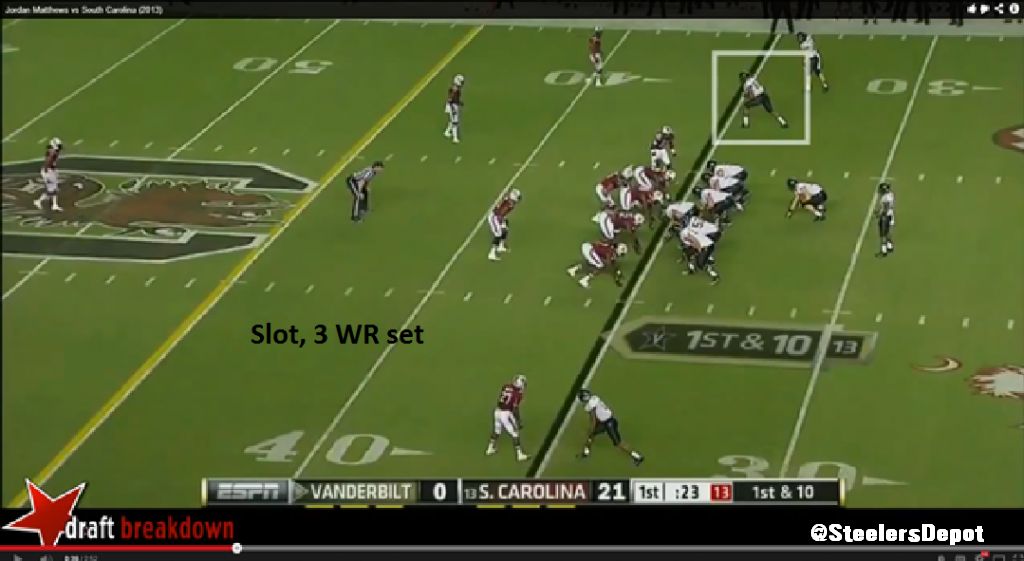 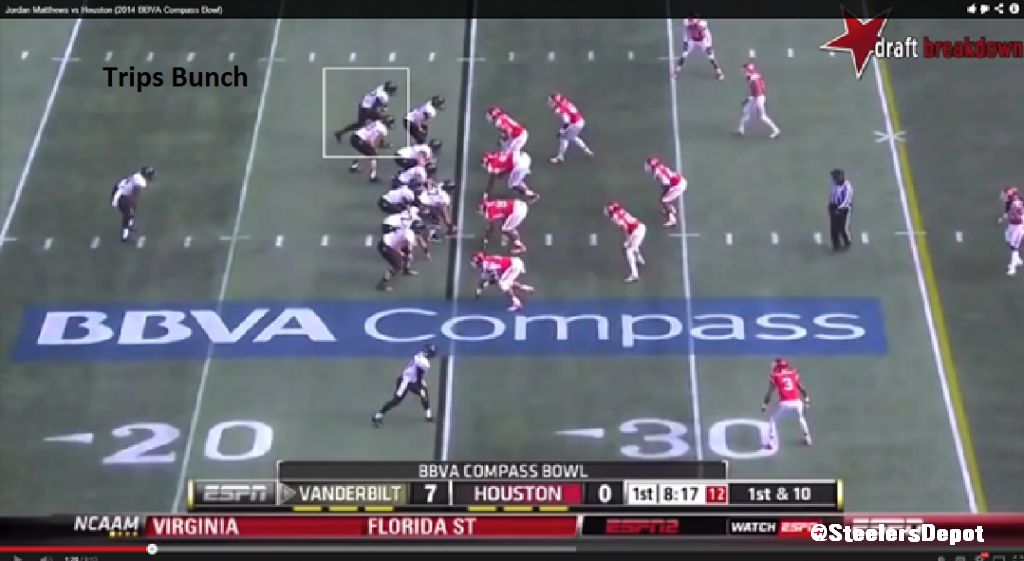 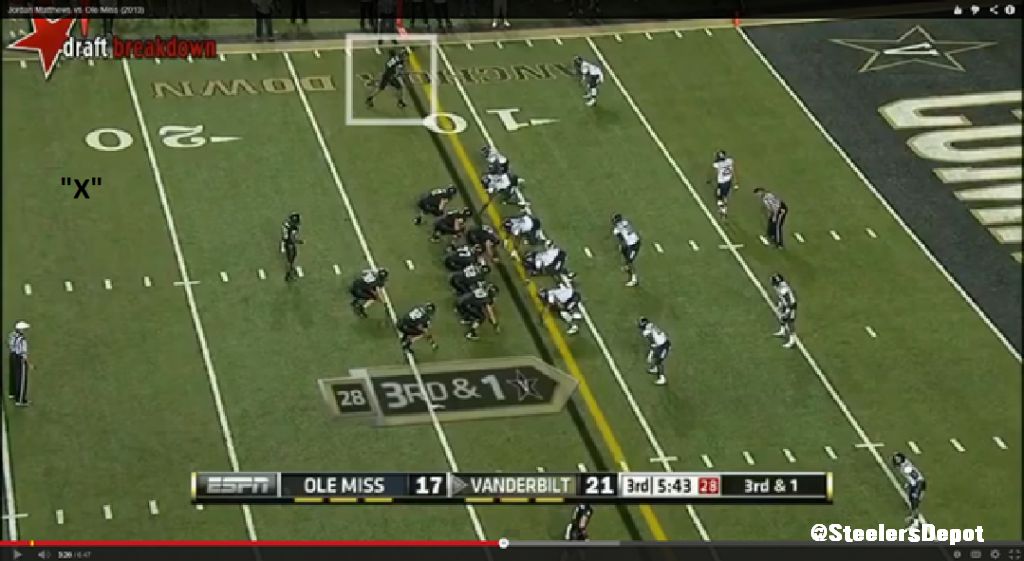 Perhaps in a weaker class, Matthews would be generating more publicity. But it doesn’t diminish his chances to succeed in the NFL. I don’t know if he’s an elite player in this class but he’s pretty darn close.

Games Watched: vs Ole Miss, at South Carolina, vs Missouri, vs Houston (Bowl)