A breakdown of one of the top cornerbacks in the 2014 class. Michigan State’s Darqueze Dennard.

– Physical in coverage, at his best in bump and run, very natural

– Attacks the ball in the air well, great job of playing the pocket of the receiver

– Has recovery speed when beat

– Lined up inside and out, used on multiple blitzes

– Came up big in bowl games

– Not tiny but has a lean build

– Can get overaggressive and physical in coverage, prone to penalties

– Not particularly explosive, wasted motion in his break on the ball

– Doesn’t look comfortable in off coverage, covering the deep third

– Jim Thorpe Winner, given to nation’s top defensive back

– Worked as a jammer

There’s no question that not only does Dennard prefer to be physical and coverage, he thrives on it. Receivers to him are what the blanket was to Linus. Always holding on. 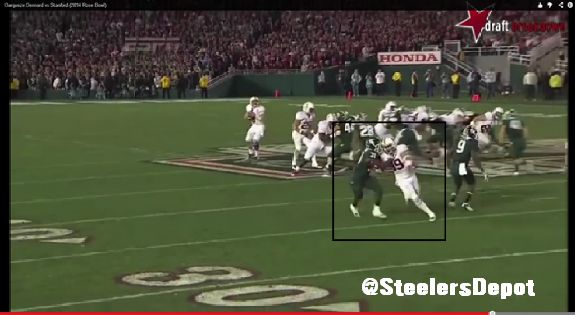 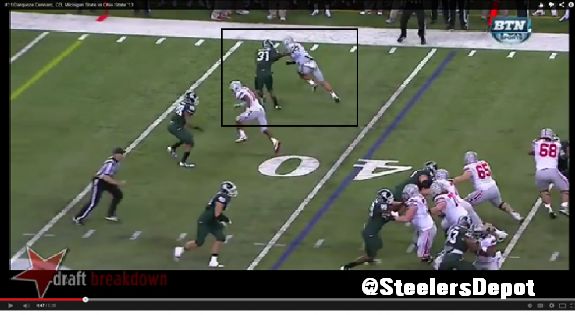 Island coverage, no help over the top. Bumps with the receiver and then plays the pocket to knock the ball away on this attempted back shoulder throw.

Love this play in the end zone. Receiver has a step but Dennard plays the pocket, swipes through the receiver’s hands at the right moment (as the receiver stretches his hands out), and knocks it away. That’s big time.

Soft hands and quick reaction. Takes advantage of this pass thrown to the inside shoulder, flips, and intercepts it. Again, the physicality to not allow the receiver to cross his face and make a play on the ball.

Typically not a big hitter but will support the run and doesn’t shy away from contact. Recorded two forced fumbles in 2013, one example below against Ohio St.

The negatives may not be many but there showed up in consistently. His physicality is a blessing and a curse. Can be overaggressive and his penchant for grabbing receivers will not endear him to referees on Sundays.

Called for pass interference on the play below and the interception obviously negated.

And holding against Stanford.

Although he does eventually make the tackle, has some trouble tracking down the running back. Don’t see him as someone who has elite speed. It’s above average but not great.

Gets run off with speed against this deep out. That is going to happen and as a corner, you have to assume the route is going to go vertical, but there’s some wasted motion coming out of his break. Little more rounded than you’d like breaking on the ball after he flips. Doesn’t allow him to get to the receiver until well after the pass has been caught. It’s not a major concern but he isn’t as explosive in his click and close as others I’ve studied like Victor Hampton and Jason Verrett.

There’s two questions that have to be asked when evaluating any player. Does the talent exist to make the transition from college to the NFL? And does the player fit into our scheme?

The answer to the first is fairly obvious. Dennard is an excellent cover corner who loves to mix it up with receivers and is at his best when the ball is in the air. And he supports the run well enough that he isn’t a liability, even if it isn’t his best asset.

The answer to the second question is murkier and gets into the philosophy of the draft. Dennard does not fit the Steelers’ scheme. William Gay, Cortez Allen, those guys get to play off coverage, carry anything vertical in their deep third, and break on short/intermediate routes. In other words, the exact opposite of Dennard’s style.

Does that mean the Steelers’ can’t or shouldn’t take him? Of course not. Coaching is nothing if not adaptive. Dick LeBeau would find ways to incorporate Dennard’s strengths…to some extent. But at its core, I don’t see the scheme changing and ultimately, some of his ability would be wasted away. Now you’re projecting a player of how he’ll fit into a different scheme, making the evaluation much trickier.

Is Dennard a bad pick? No, though I continue to harp on the fact the team does not value its cornerbacks highly. But it wouldn’t be surprising to see another corner selected that fits the scheme better, either.

Games Watched: at Notre Dame, vs Michigan, at Ohio St, vs Stanford (Bowl)