– Wonderful athlete for his size

– Disruptive and made plays in the backfield

– Proper hand placement and gets his long arms extended

– Plays with good leverage, keeps his butt down

– Bull rush that lets him collapse the pocket

– Did not see elite strength

– Slight inconsistences in his game

– Can get overextended off the ball, not bringing his lower half

– Eye level drops when taking on blocks, causing him to lose sight of the play

– Gets stuck as a pass rusher and though tries to show a repertoire, isn’t effective outside of his bull

– Momentum difficult to stop once it gets going, can cause him to get pushed down the line vs zone blocking schemes

– Tendency to lead with his shoulder, fails to stay square to his blocker

– Should collapse vs double-teams a little more than he does

– Had shoulder scoped in 2011 though did not miss time

– Missed three games in 2012 due to a right ankle sprain

– Finished third in state shot put as a junior

– Will be 24 before rookie season ends

A description of Ellis does need to be first qualified with the admission the competition I watched wasn’t very strong. In 2013, watched him against lowly Kansas and the even more woeful Southern Miss, arguably the worst team in Division One. Combined, those teams went 4-20. Kansas was shut out by Iowa St 34-0 and Southern Miss lost 55-14 to East Carolina and North Texas in consecutive weeks. Not exactly NFL competition to go off of but that was the tape that existed. Such is life, Mike Tomlin would say.

Ellis is Louis Nix III with better value. What jumps off the page at me isn’t Ellis’ strength as it is his movement. One of those rare guys with the ability to take up space and move. Heck of an athlete. His 28 inch vertical at the Combine was second-highest of defensive lineman weighing more than 310 pounds (Zach Kerr the highest at 28.5).

That’s the difference between a guy like Ellis and Daniel McCullers, who I noted as being a sloth out of his stance. McCullers vertical was a measly 20.5 inches. For Ellis, a three cone drill of 7.81 is excellent for his statue. He’s definitely more than just weight.

Maybe it doesn’t look like much but the fact Ellis is able to change directions as the quarterback cuts and can make a diving attempt at him is uncommon at 334. Ellis is the one tech to the weakside, wearing #70.

Final game of 2012 against San Jose State. Gets off the block of the left guard to track the running back down from behind. Again, unique athlete and that makes him special.

Dominant against Southern Miss. Tied for the team lead with seven tackles, recorded a sack, and 2.5 TFL, including this one below. Walks the center back, holds the point, sheds, and brings the running back down.

Ellis will eventually tire but that’s natural for a player at his size. Played on a lot of third downs and I absolutely love his hustle.

Starting this play halfway through because the beginning doesn’t matter. Pass thrown into the flats to the opposite hash on 3rd and nine. Ellis really isn’t obligated to make much of an attempt to chase it down. But he tries anyway, hustling downfield and taking a good angle.

Flashes a quick first step, stays with the play, and ends up forcing a fumble. That play doesn’t happen if Ellis gives up because the stretch is away from him.

While on the topic, as I alluded to, he possesses an explosive first step. Real good get off. In the still below, he’s off the line well before any of his teammates. 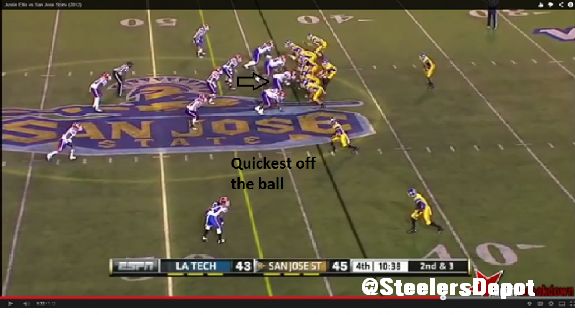 Part of that may also be due to his intelligence. Heady player who likely anticipates the snap count well although I don’t think that is the sole reason for his first step. That’s a physical trait as much as it is mental. But his recognition/reaction is top-notch for the position.

Though he gets blindsided by a lineman, he reacted quickly and that Jayhawk was forced to clean up the mess behind than get downfield and open up a running lane.

Repeatedly gets his hand up to bat passes down when he can’t get to the quarterback. 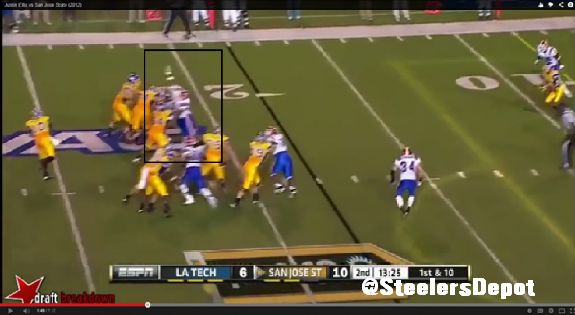 Again, the level of competition must be considered but the negatives weren’t too serious. The list likely looks more imposing than it really is. The largest issue probably isn’t even on the field. Staying healthy has proved to be a challenge, missing significant time in two of his four seasons. You can bet he was poked and prodded during the medical portion of the Combine and teams will have to feel comfortable with him in that aspect to keep him on their board.

Overall, he does carry his lower half well when rushing but there were moments where he would get overextended off the ball and lose balance/power. 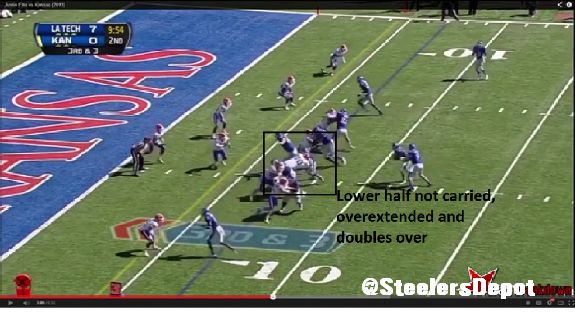 Lined up at the one tech to the weakside in the GIF below, Ellis does get pushed down the line by the left guard and center. Running back cuts through the hole he vacated. Product of Newton’s First Law. Object in motion that stays in motion. Hard to change his momentum down the line.

Must stay conscious of staying square to his blocks. Can’t turn his shoulder and get washed. See it against San Jose State.

Of course, with any nose tackle, weight is a concern. Ellis is not an exception. In his bio, Louisiana Tech lists him at 357. He did manage to drop it, showing up at the Shrine Game at 351. By the Combine, a “svelte” 334. Concern there is he dropped weight specifically for the Combine; nearly 20 pounds doesn’t happen by chance. And some reports pegged him back at 342 by his Pro Day. Something to monitor.

It should be considered a sidebar but it’s worth noting his conference did not seem to recognize his solid senior season. Didn’t make the first or second team All C-USA. In fact, his teammate, defensive end IK Enemkpali was the Bulldog lineman to earn such honors.

Just a bit strange that he wouldn’t be considered one of the top eight defensive lineman. Reminds me when Dontari Poe was only 2nd Team C-USA in 2011 despite being touted as a top draft pick. Of course, Poe burst onto the scene last year as a dominant tackle so this may be much ado about nothing.

Based on what I’ve read and more importantly, seen, it’s safe to say I was off base when I penciled Ellis going in the sixth round to the Steelers. Not going to happen. That size/athleticism combination is too good to pass up, especially in a relatively weak defensive line class. I’ve discussed the importance for lineman to have that quality first step. To get into the lineman first and take control, not the other way around. Why I didn’t like McCullers. Why I’m a fan of Ellis.