Breakdown of another running back. Auburn’s Tre Mason.

– Maintains speed through his cuts

– Some muscle but short and relatively small frame

– Above average but not top notch speed, more quick than fast

– Still not a particularly powerful runner

– Some difficulty creating space unless naturally there

– Dealt with injury to his left ankle during his senior year

Mason provides just enough tantalizing plays to keep you wanting to watch more. Times where he can get bottled up carry after carry and then finally bust a big run. Happened against Texas A&M. Has that splash-play threat to keep you engaged.

Splash play against the vaunted Alabama defense, including making Ha Ha Clinton-Dix miss. Does get chased down by a linebacker at the end of the play, however.

Like his feet and he maintains his speed moving laterally. Combination of being a decisive, downhill runner who doesn’t dance results in him consistently getting positive yards.

Really love the above play. Presses the hole, gets the defender to commit, and then cuts to the right for a big gain.

Underrated aspect to his game is his toughness. Certainly not a brusier but no feat to run between the tackles. Auburn trusted him to handle the workload (317 carries) and used on numerous 3rd/4th and shorts.

And trusted near the goal line to find the end zone.

Runner that does go down too easily and doesn’t always run through contact. Not a tiny frame but don’t get the Ray Rice comparisons. Same height but Rice is much thicker than Mason. Some big runs he could have busted off if he would have broken one more tackle in the open field.

Struggles in pass protection. Didn’t get a ton of chances either because of Auburn’s run-heavy, option offense.

In the three games I watched, he fumbled once. Put the ball on the ground in two other instances but was called down. Ask Montee Ball. Fumbles will quickly put you in a coaches’ doghouse.

Question that lingers is whether or not he is a product of Auburn’s offense. Option heavy and it gave Mason a lot of space to run. With his struggles to run through contact and the realization he won’t always have the open field like plays pictured below, how will he fare? 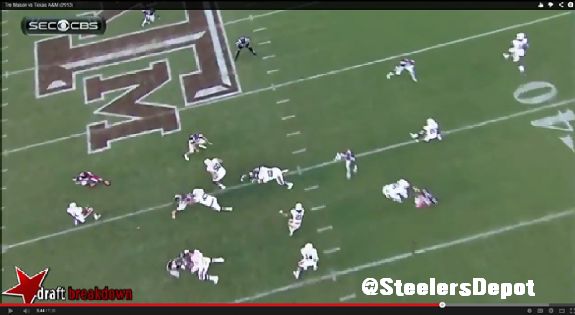 While I’m not completely sold on Mason, I am a fan. Especially in a relatively weak running back class without a standout runner. His combination of being a downhill runner with quick feet and lateral quickness is a dangerous one. He may not be huge in size but handled the workload last season like a bruiser. Showed he is capable of being an every-down back.

His return ability also boosts his value. An asset and at worst, teams will have that to fall back on if he doesn’t pan out as a full-time runner.