– Playmaker when the ball is in the air, tracks it well

– Short but a good leaper who can high point the ball

– Has recovery speed when beat

– Asked to do a lot of things from an assignment standpoint

– Fiery and competitive nature, not afraid to challenge players bigger than him

– Threat with the ball in his hands

– Short and lacks muscle to his frame

– Unreliable tackler, misses far too many

– Will shy away from contact around piles, won’t get his nose dirty

– Lack of bulk and strength leads to him getting pushed around, has trouble getting off blocks once locked on

– Aggressive, and will gamble, trusts self to win, probably too much

– Some character concerns to be checked out

– Position limited at next level?

– Not a ton of experience, just a two year starter

– Left South Carolina as a junior

– Alcohol related arrest in February of 2010, right after committing to South Carolina

– Briefly kicked off team in June of 2011, reinstated a week after and served three game suspension to start 2011 season

– Later in career, regularly spoke to children at local schools

Though Hampton never racked up gaudy interception numbers, I’d still classify him as a ballhawk. He’s at his best when the ball is in the air.

As I sometimes do, like to see how prospects fare against “inferior” competition. Expectation is they dominate. Watched Hampton against Coastal Carolina and he did just that. Intercepted a pass and nearly picked off two others.

Sits on this hitch against Arkansas and picks it off, returning it for 21 yards.

Deflects the pass on this dig, leading to an interception.

Hampton may have some of the quickest feet in this class with no stiffness in his hips. Fluid when asked to flip and clicks/closes without an issue. Saw it at the Combine and it matches up on tape.

Sits in the flats, sees the back leak out, and closes to make the tackle short of the goalline.

Here, in Cover 3, Hampton is forced to carry the tight end vertical down the seam. But he reads the quarterback and flips his hips to the receiver open down the left sideline. Gets to the ball quickly and breaks it up.

He’s a fiery, competitive player who isn’t afraid to challenge top receivers or ones much bigger than him. Repeatedly pressed Missouri’s Marcus Lucas and L’Damian Washington, 6’4 and 6’3 respectively. Matched up against and overall, did a good job of handling Clemson’s Sammy Watkins. Similar to Ike Taylor in that sense. Doesn’t play scared and embraces the challenge.

For as great as he is in coverage, he’s equally as terrible as a tackler and in the run game.

My notes have him for eight missed tackles in the five games I watched and it may have been more than that.  Against Arkansas alone, he missed four. Only recorded two. Yikes.

While he is diminutive in size and lacks strength, he also plays with poor technique. Arm tackler who doesn’t snap and drive into the ball carrier, preferring to throw out his arms and hope for the best. Plays with his head down and doesn’t see what he hits.

In that Arkansas game, he does get his butt down and is ready to snap through to bring the runner down. 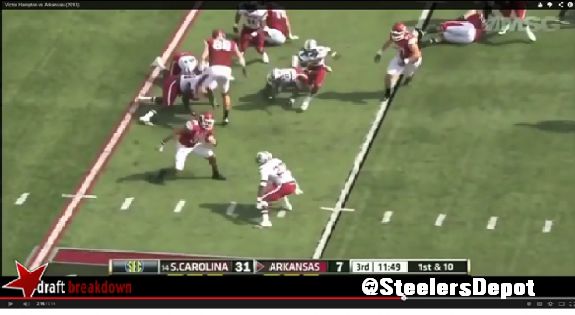 But then abandons that and doesn’t bring his lower half as well as he should. Falls off the runner for a miss. 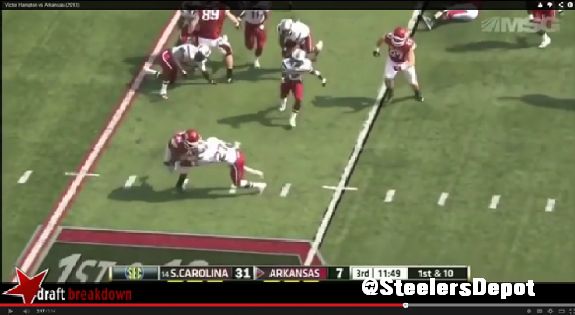 Again, in the open field, head down and not bringing his lower half. Same result, another miss. Leads to a huge gain and “splash” play allowed. 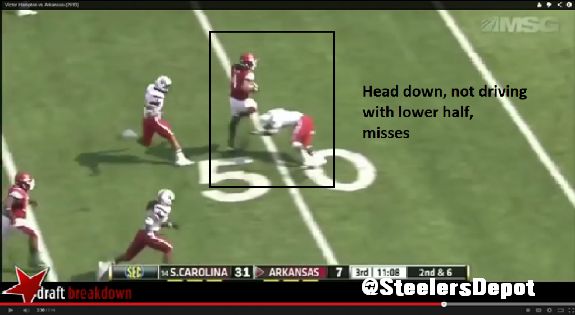 Can’t bring the back down in double overtime against Missouri (ignore the box around Clowney, game was a cut up of him but still good chance to watch Hampton)

Comes flying in against this screen but whiffs.

Tendency to go for the big hit and lead with his shoulder. When it pays off, he can knock someone out of the game. Took out the Badgers’ starting QB in the bowl game with this blow. But that style causes him to miss too much.

Allergic to contact and shies away from big piles. Won’t get his nose dirty. When he does try to wrap, tendency to tackle high.

Severely lacking strength and can get pushed around. Has trouble getting off blocks once receivers have their hands into him.

Gets trucked by the wide receiver at the end of the play.

Lead blocking fullback takes Hampton (#27) out of this run.

Risk-taker and trusts himself a ton. Can gamble and get beat, especially in press. Though he’s competitive, bigger receivers can run through his jam. Example below. 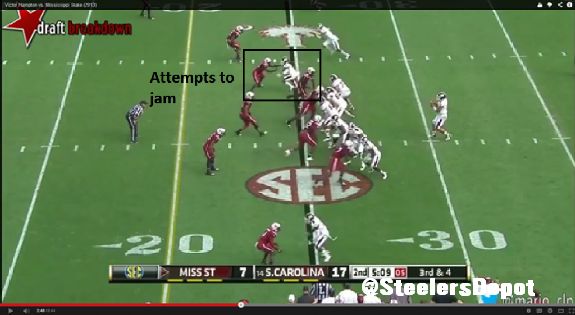 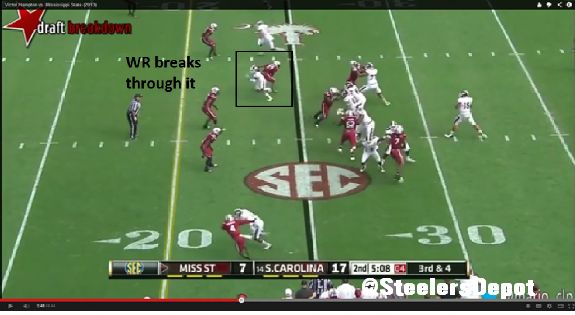 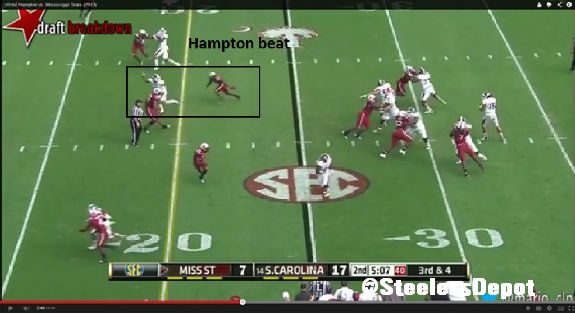 And his technique in press needs work. Will lead with the wrong hand at times. 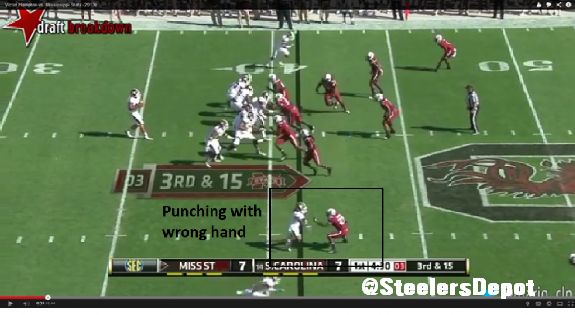 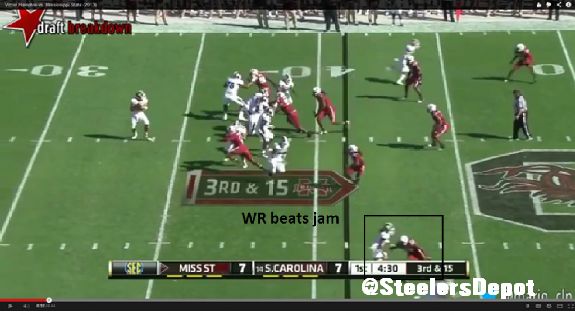 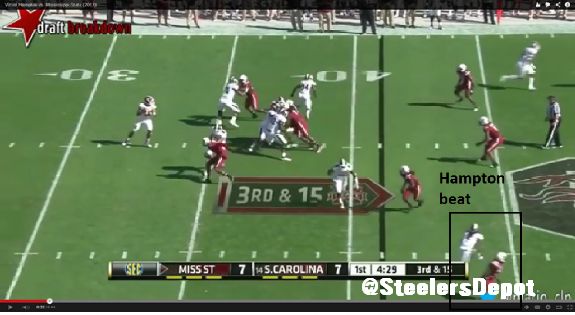 Hampton was asked to play a little bit of everywhere in the games I watched. Primarily on the outside but got reps in the slot. Asked to press, play the flat in Cover 2, man, the deep third, etc. Has experience everywhere. Blitzed a few times from the slot, too. As noted, work in the return game. Some could project him to be just a nickelback and too small to play on the outside a la former Gamecock Captain Munnerlyn.

Was a headcase but has appeared to have grown up. Got his act together, stayed clean, and talks to schools to tell kids to avoid the mistakes he did.

Most telling is the candid Steve Spurrier saying this near the end of this season.

“Victor has really come around and been an excellent teammate and a fun guy to coach the last half of this season. He’s had some issues in the past, but he has been outstanding the last 10 or 12 weeks for us.”

And his secondary coach has called Hampton a “good person.”

Hampton’s past transgressions is still something worth talking to him about but he appears to have come out the other side and moved on.

I compare him to Asante Samuel. Ballhawk who can make plays but an unreliable tackler who isn’t going to support the run effectively. Hampton’s attitude is like a little brother. Fiesty and competitive but will get bullied around because of his size.

That Samuel style may fit for some schemes but not the Steelers. As I’ve wrote repeatedly and as it’s clear to every Steelers’ fan, you have to tackle well and support the run to play for Dick LeBeau. Hampton doesn’t do that. He’s a talented player and will find a home somewhere but it shouldn’t be in Pittsburgh. No question he’ll be removed from my next mock draft.

Games Watched: at Arkansas, at Missouri, vs Mississippi St, vs Coastal Carolina, vs Wisconsin (Bowl)