Our focus has shifted to the offseason and for the next few months, I’ll be providing scouting reports on several draft prospects. Some of these players the Pittsburgh Steelers may look at and others will be top players that will be off the board before they select. All to make you as prepared as possible for the 2014 NFL Draf

– Quick to the tuck ability is remarkable

– Soft hands and plucks the ball away from his body, even in the open field

– Quick feet to chop out of his breaks

– Makes defenders miss after the catch

– Ability to separate off the line vs tight coverage

– Tons of return value and elite threat on special teams

– Versatile and used in a lot of different ways in college

– Tough, willing to go across the middle

– Does not have top notch long speed

– Lacks strength to run through jams

– 34 career starts for the Tigers

– 2013 Paul Hornung Award winner, given to nation’s most versatile player

– Father a running back, rushed for over 700 yards and 9 touchdowns in his career

I’m sure I’ve used the phrase before. Former wide receivers coach Scottie Montgomery would call receivers as “quick to the tuck” meaning they secure the ball and get upfield in a hurry.

Odell Beckham Jr might do that as well as any receiver in this draft. I’ll do one better than Montgomery and call it “pluck and tuck.” Ability to catch the ball away from your body, put it away, and explode upfield. Regularly saw that from him.

Soft, natural hands, and can adjust to the flight of the ball. Slant is low but Beckham goes down, gets his hands under the ball, and pulls in the pass.

Plays with big catch radius and has large hands. Ability to high point the football. Still of him climbing the ladder to make the grab against TCU’s Jason Verrett. If he doesn’t go up and get it, good chance the aggressive Verrett knocks it away. 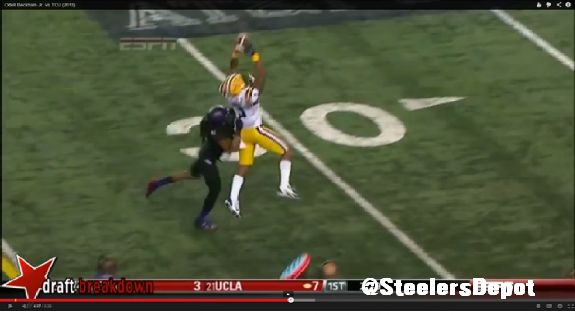 Shows his fluidity and natural separation chopping out of this curl. Again, quick to the tuck, makes the corner miss, and gets another ten yards.

Has a certain amount of toughness and isn’t scared to go across the middle of take a big hit to make the catch. 3rd and 23 reception against Georgia.

Even if he’s a borderline elite receiver, nobody can disagree he’s an elite return man. From his senior year of high school where he averaged 30 yards per punt return to 2013 at LSU, it might be the best part of his game. And that’s not a knock against him as a receiver as it I a glowing recommendation of his return skills.

70+ yard return against TCU. Big moment too with LSU only up by three in the 4th quarter.

Had a missed field goal returned for a TD against UAB. In all, 104 combined career kick and punt returns. Even as a rookie, it stands to reason he’ll begin his first year as the starting return man for whatever team selects him.

LSU left no stone unturned with his talents. Played outside, in the slot, as the lone receiver in Heavy sets, on end arounds (5 carries for 58 yards in 2013) and both return spots. At the next level, you can do the same.

Naturally gifted athlete who as we’ve shown, has the vertical to dunk. Was also a standout basketball player in high school.

Negatives are relatively few but his size and lack of physicality do work against him. Have talked about the notion the Steelers’ don’t need to draft a tall receiver but it would be naïve to think there are times where being short bites you. As someone who has to wear extra socks to ride the roller coasters at Kennywood, I can attest to that.

Ball placement isn’t particularly good but you’d have to think a player with a couple more inches would have been able to make a play on this ball.

Lacks upper body strength and when he gets jammed, will struggle to separate. Lined up in the slot in the clip below.

Beckham Jr is the real deal. A player that has been increasingly mocked to the Steelers and understandably so. Would have no qualms about taking him. Don’t care that he isn’t 6’5. The guy can play. That’s all that matters.

Games Watched: at TCU, at Georgia, at Ole Miss, vs Texas A&M