With the regular season over, our focus has shifted to the offseason. For the next few months, I’ll be providing scouting reports on prospects. Some the Pittsburgh Steelers may look at and other top players that will be off the board before the Steelers select. All to make you as prepared as possible for the 2014 NFL Draft.

A scouting report of Wisconsin inside linebacker Chris Borland.

– Smart player who takes great angles to the football, making up for lack of speed

– Very capable of shedding blocks, doesn’t get caught up in the wash

– Form tackler, a technician, and can pack a punch

– Always around the ball

– “Won” in matchups vs NFL prospects

– Loads of accolades in career

– Can get stuck and washed when unable to shed

– Not a true pass rusher, doesn’t have an arsenal

– Benefited from playing behind good DL, kept him clean and free to roam

– 48 career starts for the Badgers

– Played mostly “Mack” linebacker in Wisconsin’s 3-4, moved to the edge in subpackages

– Two brothers that played sports at Wittenberg, one basketball and the other soccer

– Another brother that played soccer at Army

– Reinjured shoulder two games into 2010, had to have another surgery

– Returned seven kickoffs, 3-3 on extra points as a freshman

– Lettered in basketball, tennis, and track and field in addition to football

But boy, put on the tape while I eat crow. Borland is a fantastic player. I think I’m in love.

Prerequisite for any potential inside linebacker is the ability to get off blocks of lineman flowing to the second level. If you can’t shed, you won’t succeed. Simple as that.

Despite the short arms, his quick hands allow him to rarely even get engaged, let alone have to get disengaged. Borland is #44 for the Badgers.

Last clip happened quick before the fade but that was Borland fending off a cut block and then shedding the next lineman. Impressive.

So smooth, so effortless.

Borland understands he’s not a burner. 4.83 40 he ran at the Combine demonstrates that. He doesn’t try to fight it. Compensates by taking good angles to the ball and for the most part, playing inside/out.

Essentially a stretch run away from Borland. Works down the sideline, doesn’t get trapped in the flow, and brings Braxton Miller down. Borland is not faster than Miller. That’s an ability to diagnose the play, fight through the wash, and take a perfect angle to the runner.

Stays at home versus this reverse and pushes the wide receiver to the sideline. Again, with the correct angle.

As I’ll continue to harp on throughout the report, he is not fast. But he has the smarts to pick up on when the snap is coming. Routinely got a good jump.

Allows him to beat the guard in pass protection.

Makes him a better pass rusher than he really is. Doesn’t have many moves in that department but as an inside linebacker, getting that step and messing with the blocking schemes of the lineman is valuable. Force the line to pinch the “A” gaps and you can create favorable matchups on the edge.

Fantastic against the run, too. Sound tackler who drives through with his legs. Truly plays bigger than he is. Stuffed Ohio State running back Carlos Hyde, ranked first on Mike Mayock’s positional rankings, twice. Once on 4th and 2.

And another on the goaline.

Talk about being fearless. Meet the back in the hole, snap the hips, roll through, and plant him on his backside.

Head up, seeing what he hits. Butt down, legs bent, ready to drive. 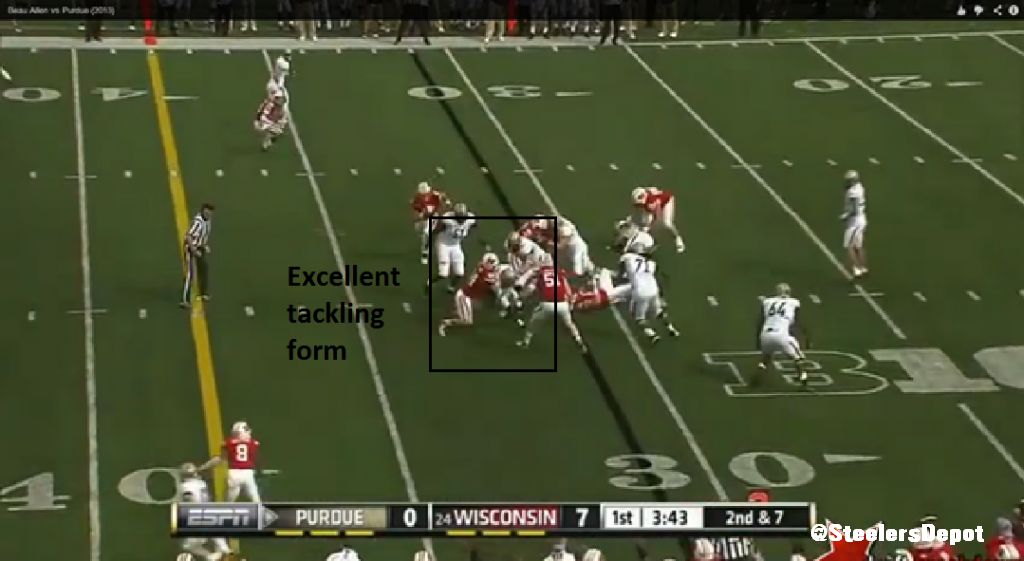 Kid has a great motor, too. Hungry and wants to eat on every play. You’ll get a look at his spin move too but his motor is what stands out on this play versus the Buckeyes. Chases Miller all the way out of bounds.

Later, 3rd and 10 with the Badgers down a score. Game on the line. Borland gets to the edge but can’t bring Miller down. Immediately leaps back to his feet, explodes, and chases him down.

I could go on more about his positives but want to point out some of the flaws, too.

Are times where he’ll get a bit aggressive and over run the play.

And when a blocker locks on, Borland lacks the strength to shed.

In the second half of this play, you can see him try to catch up to Miller. Doesn’t gain ground. Again, just average speed.

Takes the proper angle but can’t close in time to bring the running back down who hits the edge and scores.

It’s borderline insane for me to say, because I never say this, but Borland just feels like a Pittsburgh  Steeler. I love numbers and empirical data. Why I earned cool nicknames like “Nerd” and “No, I won’t go out with you” in high school.

And my claims are backed up in the tape. But going beyond that, his style just belongs in a Steelers’ uniform. If Jack Lambert and Mike Webster had a child, he’d be Chris Borland. The toughness and tenacity on a less than ideal build.

I mean, he even pulls off the Ray Mansfield “kicking extra points” secret ability. It’s fate.

If I’m an area scout, I don’t care who I’m fighting against when building the board, I’m in Borland’s corner. Fight to get him to play for you. Fight so he won’t play against you.

I’ve been a Vince Williams proponent. And still am. But this Badger makes me forget about him. Not sure where to project Borland. Would be willing to trade back into the latter half of the second round or trade up from the third round into the latter second, early third to snag him. Wouldn’t think twice about him. Heck, if I was that worried, I’d take him with my second rounder. He’s that special. Even if his build isn’t.

Games Watched: at Arizona State, vs Purdue, at Ohio St