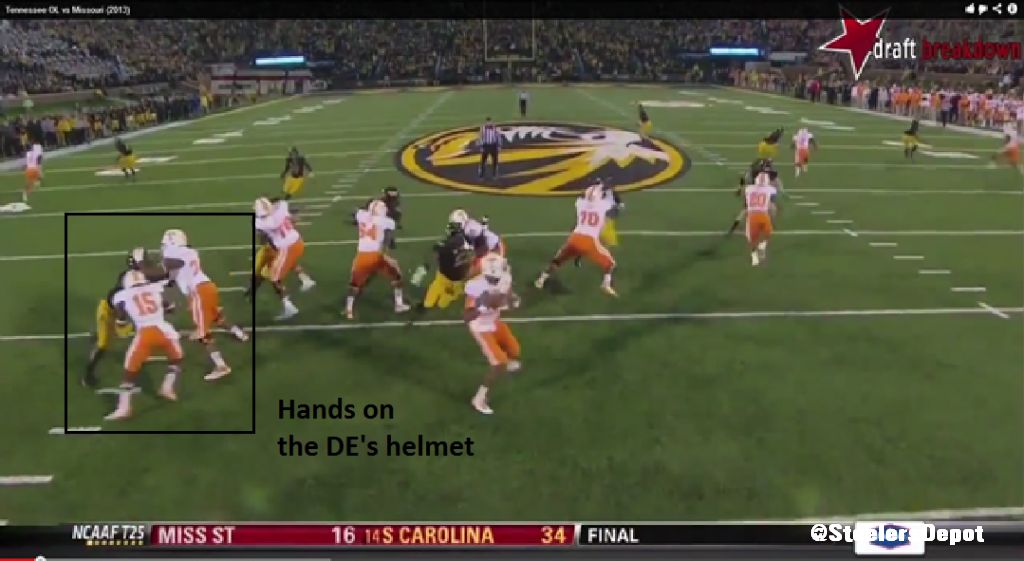 – Uses size effectively as a run blocker, can seal

– Puts forth good effort in getting his arms extended

– Decent burst off the ball and above average athlete

– Relatively inexperienced, has not maxed out ability

– Hand placement all over the place in pass protection, needs a lot of work

– Consequently, exposes his chest and lets defenders into his pads

– Tendency to lean over in pass pro

– Will fall off blocks in the run game

– Does not have a strong first punch

– Fires out of stance well but struggles to mirror

– Will get beat by the best edge rushers

– Difficulty against inside rushes and counter moves, can’t stop his momentum off the line

– Too many false starts

– Only played one position along the offensive line

– All at left tackle

– 105th overall prospect coming out of high school by ESPN

Before we get into a more detailed breakdown, I have to add the caveat that Richardson may have been fighting an ankle injury throughout the season. He pulled up lame after some plays against Oregon (gif below, Richardson is the left tackle, #74), Alabama, and Missouri. Hard to say for sure or how much it affected him. But if I’m a coach/general manager at the Combine, I’m telling my doctor to take a careful look at his legs/ankle. Could explain some of his struggles.

To kick the breakdown off, we’ll start with the good. Richardson has loads of upper body strength. Fills out his frame well and possesses long arms. Can get a push in the run game, especially when he does carry his lower half.

In his marquee matchup against Jadeveon Clowney, he buries him into the ground in pass pro, showing off that anchor. Does get a chip from the back and Clowney does briefly leave his feet, but nonetheless, impressive to do against a top five pick.

Less eye-opening, but another example of his strength against Missouri.

As a run blocker, he has flashed the ability to get his hips in position and seal. Again, against Clowney, he opens up a running lane. Notice the arm extension, too. Not letting Clowney get into his body and shed. Knees bent and takes a step laterally to avoid getting overextended and falling off.

When it comes together for Richardson, it’s impressive.

Capable of moving laterally, he can seal the edge. Not an elite athlete but the fact his feet don’t stop makes up for it.

But he’s proof of Einstein’s First Law. Once he comes off the ball on his kickslide, he can’t work back to the inside. Becomes a sitting duck. Stymies the rush initially here but the end sheds and Richardson can’t mirror to the inside.

He isn’t the worst offender in his bend, but does a nice Leaning Tower of Pisa impersonation. 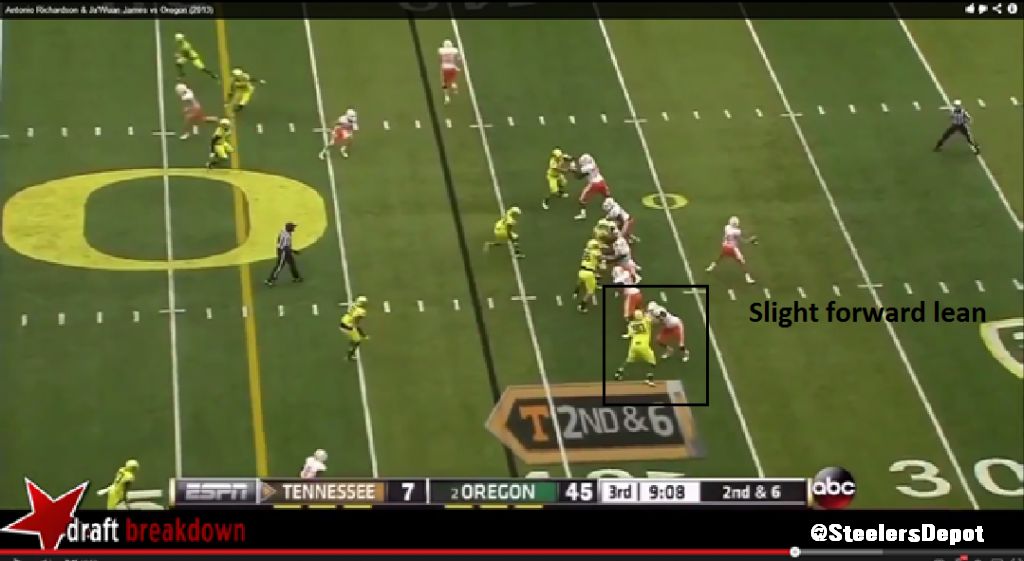 The first trait I mentioned in my “bad” was his hand placement. He understands it in the run game, when he’s in control and attacking, and will get his hands inside the numbers. When retreating in pass protection, it’s a 180. Flails around and his placement is too far to the outside. Will short arm, too. Examples are best shown in photos below. 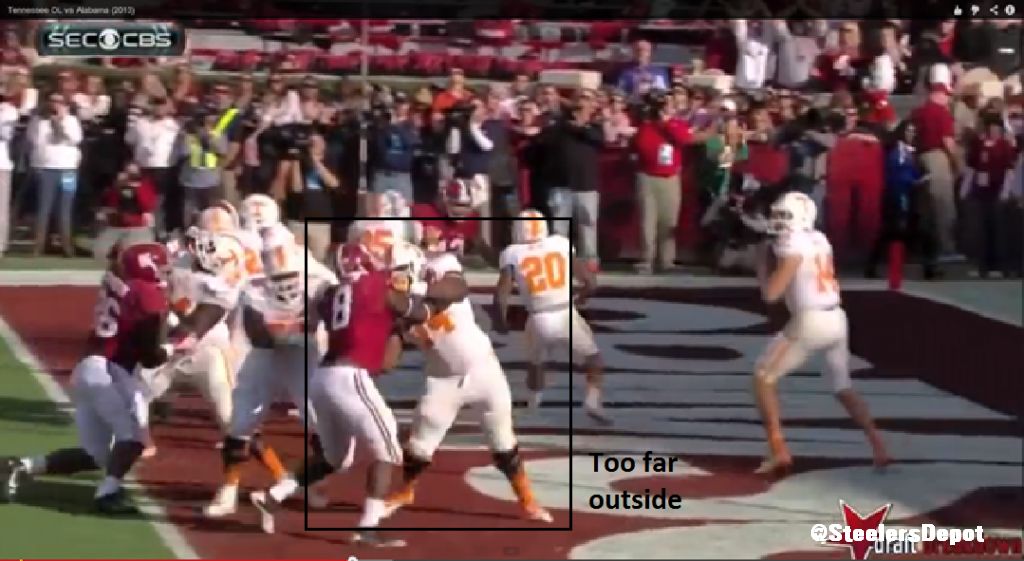 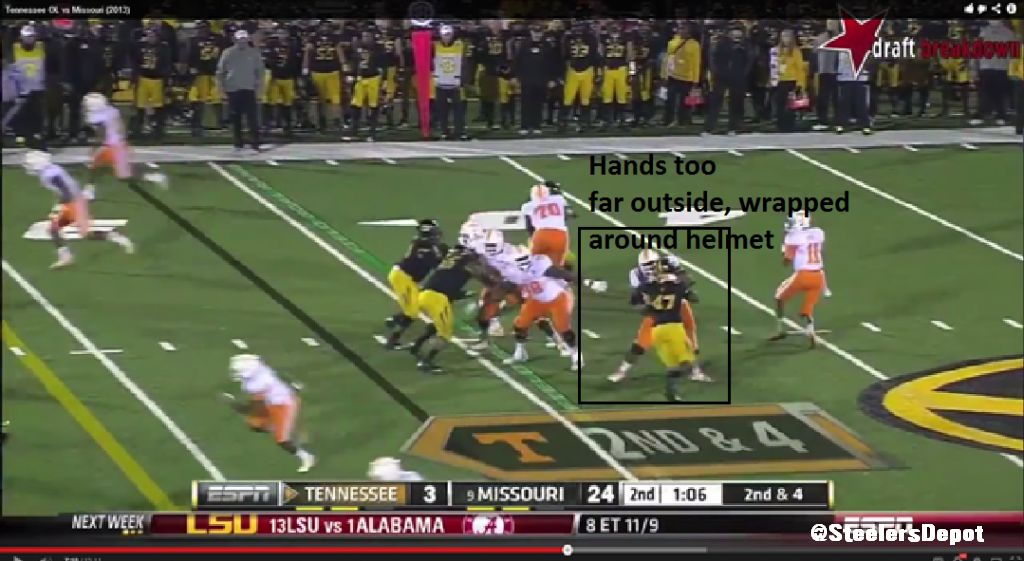 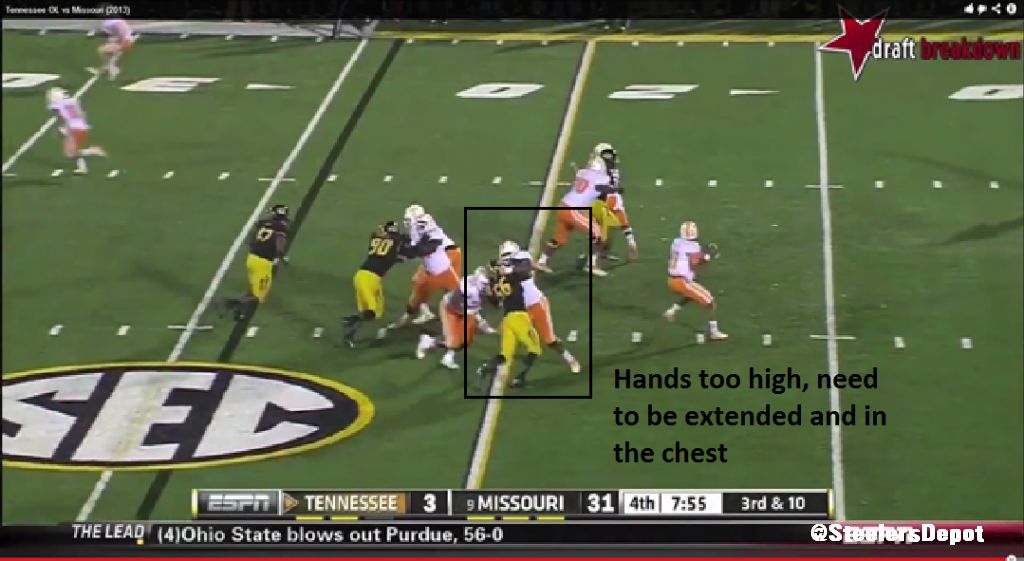 One example of a similar issue as a run blocker though it’s much less frequent. 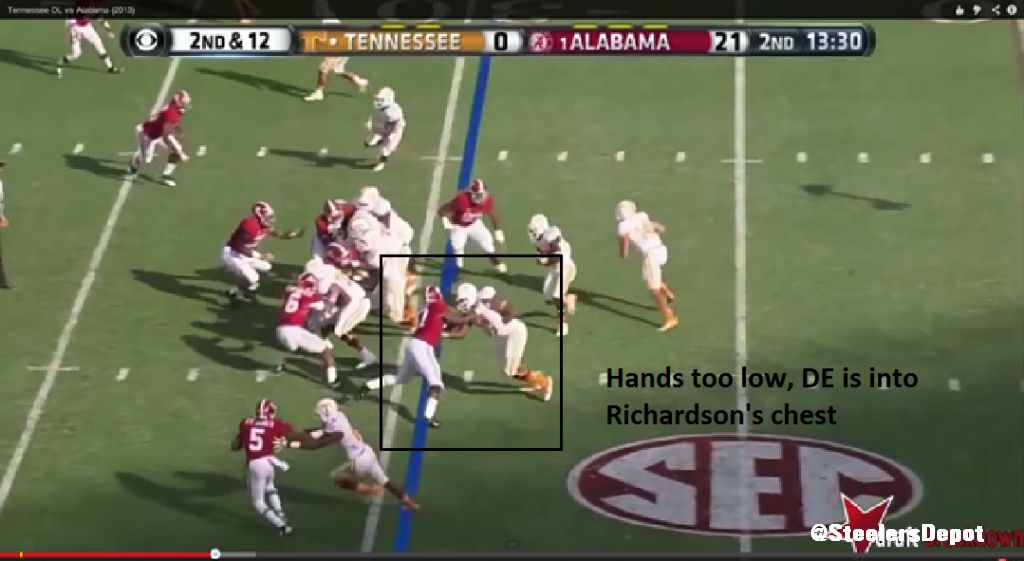 In the run game, he falls off his blocks too easily. Technical problem, not physical, but must be refined.

As alluded to, his biggest test came against Clowney. Truthfully, it was not a bad performance. Already noted two “plus” plays against him. But it was clear that Richardson was not remotely quick enough off the ball in either phase to prevent splash plays.

Difficult matchup but there is no better litmus test for a college tackle than going against Clowney. Also I’d be remiss if I didn’t point out in the first half, Richardson false started twice and was called for illegal formation another for failing to be on the LOS. And that game was at home. Had another two false starts against Missouri.

It’s debatable if Richardson will be able to stick at left tackle, and I’d currently lean towards “no”.

The upshot is some of his negatives are coachable. For a player that only has 24 career starts (and was also ineligible to play half his senior season of high school), he’s got time to grow and get better. Where he is now is not where he could be five years from today.

Richardson is more physical and stronger but comparing him to someone like Marcus Gilbert wouldn’t be too far off. Not the highest of compliments but certainly not an insult. Draft stock could be similar.

Games Watched: at Oregon, vs South Carolina (Half), at Alabama, at Missouri