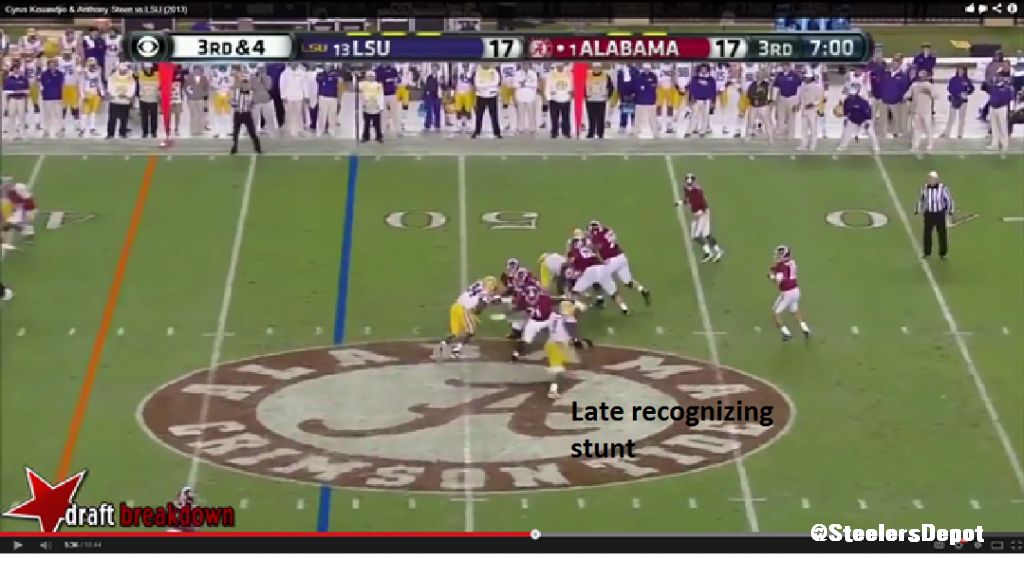 Back at it with one of the higher touted offensive tackles. Alabama’s Cyrus Kouandjio.

– Big size who has grown into his frame

– Quick feet and an impressive athlete

– Surprisingly good burst off the ball

– Overall, plays with good bend, gets butt down and knees are bent

– Doesn’t double over when forced to mirror

– Wide base lets him cover a ton of ground

– Uses his size/length to seal the edge when beat

– Solid strength and uses his size to his advantage, can seal and wash

– Flashes a mean streak as a run blocker

– Could work on developing a better first punch

– Tends to get a tad grabby in pass protection

– Only played one position

– 24 career starts, all at left tackle

– Allowed only 5 sacks in the last two seasons

– Top recruit out of high school, had offers from over 60 schools

– Underwent arthroscopic (clean out) shoulder surgery in July 2013, did not miss any action

– Born in Cameroon, moved to America as a child

I haven’t gotten eyes on the other top tackles in the draft, Jake Matthews, Taylor Lewan, and Morgan Moses to name a few, but Kouandjio has the look of being a top tackle. Perhaps not the best, surefire top five selection but an individual with plus marks as a run and pass blocker.

Judging by his frame, he might get pigeon-holed as a run blocking right tackle by some. But he’s a heck of an athlete. In fact, his pass protection may actually be better than his run blocking.

Here against LSU, he handles an initial step, an initial, move, and counter. Working at left tackle (#71), he stays in front of the end who starts with an outside step, tries to rush inside, and then counters back to the outside with a spin.

Versus Texas A&M, you see all three factors come into play. Arm extension, getting into the pads of the end. Knee bend. Isn’t upright and isn’t doubling over. And he keeps his feet moving  laterally. Also get to see how his size allows him to have a wide base. As noted, covers a lot of ground in fewer steps than most.

Really liked the burst out of his stance and the knee bend on this play.

Of course, he isn’t always able to stay square and in front. But Kouandjio possesses the ability to recover when he’s beat. A few plays later after the above animation, the end gets a good jump. But Kouandjio uses his length and pushed the end upfield, sealing the edge. Gives the quarterback a pocket to climb up in.

Another example using pictures. He was slow in picking up this stunt but still able to seal. Isn’t the prettiest thing to put on tape but playing left tackle at the next level isn’t a position of comfort. Just get the job done. Overall, that’s what he does. 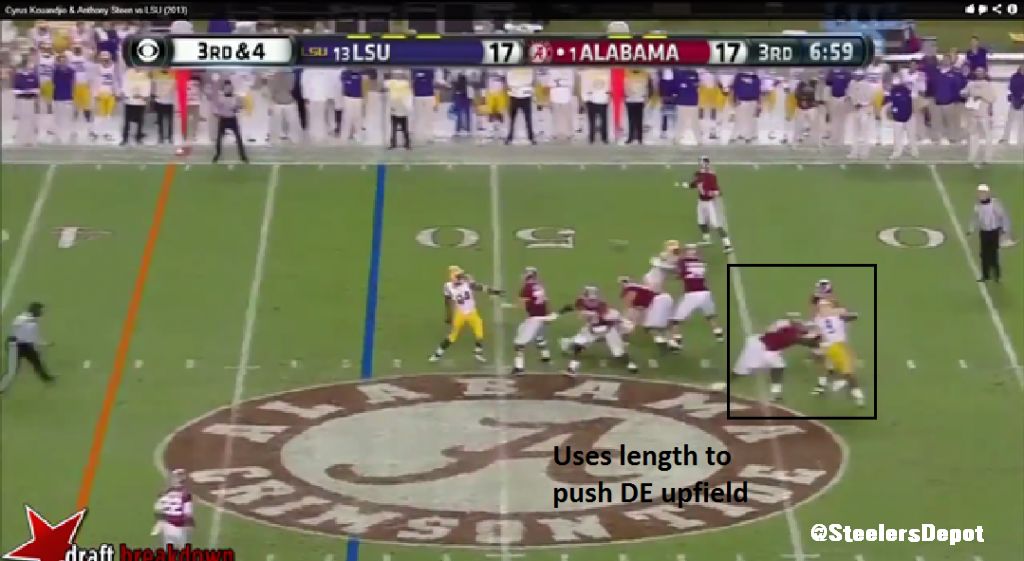 His length is superb and he knows what to do with it. Check the arm extension here. Into the DE’s chest while he’s wrapped around the tackle’s wrist. Advantage, Kouandjio. 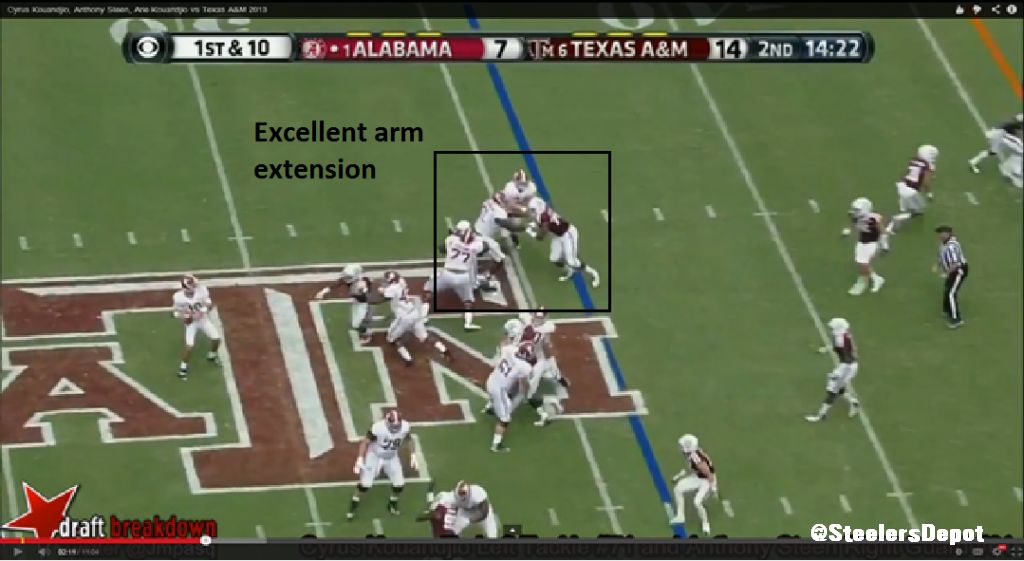 But as I also mentioned, situational pass rushers could cause him fits at the next level. As I watched Dee Ford (I didn’t specifically watch the Alabama game for Kouandjio), he was beat a few times with Ford’s patented speed/dip. Against Oklahoma, the Bama left tackle gave up a sack/forced fumble to seal the win for the Sooners. Product of the end being able to pin his ears back and maneuver around the edge.

Will have pay special attention to maintaining his base and avoiding the flatback on his punch. Getting the proper jump off the line and having a clean kickslide will be critical against those type of rushers. Once they swap hips and get best, it’s difficult to recover.

Couple of clips to show his run blocking. Dominates those smaller than him, as he should.

Owns a mean streak that has become a lost art for lineman. In the bowl game, stays on his block well past the whistle.

But like to see it. Got his facemask pulled at the end of the play but didn’t retaliate. Didn’t put his team in trouble with a reckless penalty.

Came away particularly impressed with this run block despite it coming against a safety. Gets tripped working to the 2nd level but stays on his feet, sticks, and finishes his block.

The flaws listed are minor and only show up periodically. Just a lack of consistency in those areas as opposed to a chronic issue. Does have some injury blips that will be closely examined at the combine, but has proven the knee injury has not hurt him.

I liken Kouandjio to Buffalo Bills’ left tackle Cordy Glenn, who is now coming into his own on the blindside. Projections are difficult, especially in February, but Kouandjio’s name should be near the top. Stick around for when my final rankings come together in a few months to see exactly how he stacks up.