With the need growing after the loss of Jerricho Cotchery, a look at wide receiver Donte Moncrief.

– Super smooth athlete and a long strider, glides around

– Fluid hips, very little stiffness, in and out of his cuts quickly

– Playmaker and pretty dangerous in the open field

– When committed, strong run blocker who can stick and drive DBs

– Drops far too many passes

– Too often tries to go for the one-handed, spectacular grab

– Doesn’t always play to his height

– Flat out quit on some plays, especially when play is extended

– Limited to mostly playing as the “X” receiver, outside the hashes

– 66% of receptions went for a first down

– Cousin of Shay Hodge, who spent a short stint in the NFL with the 49ers and Redskins

Before even putting on the tape, it’s hard to not be intrigued by Moncrief. A receiver at that size with that vertical who ran a 4.4 flat. In my “true heights” that will be unveiled in the coming weeks, Moncrief came in third of those who worked out at the Combine. That bested the likes of Kelvin Benjamin, Martavis Bryant, and Jordan Matthews.

On the tape, Moncrief provides just enough tantalizing plays to keep you watching.

Again, for his size, he’s as smooth in the open field and coming out of his breaks as you could hope for. Top of the screen, chop and break on this curl for the first.

Though he does fumble at the end of the play (recovered by Ole Miss) you can just see the type of athlete he is. Long strider who can change direction without losing speed.

Possesses the size, strength, and when he wants to, the desire, to be a powerful run blocker on the outside. Bottom of the screen on the following clip.

But oh man, is Moncrief inconsistent. And the issue really centers around his hands. Just so many drops. At least six drops in the four games I watched. Part of it is him being a body catcher and not getting his arms extended away from his body. Plays with a much smaller catch radius than he should. 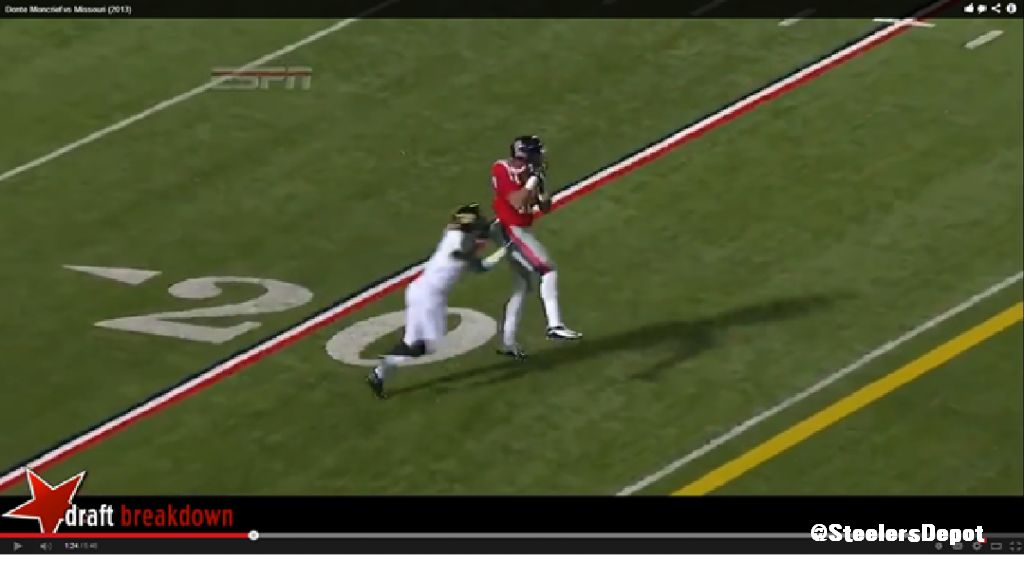 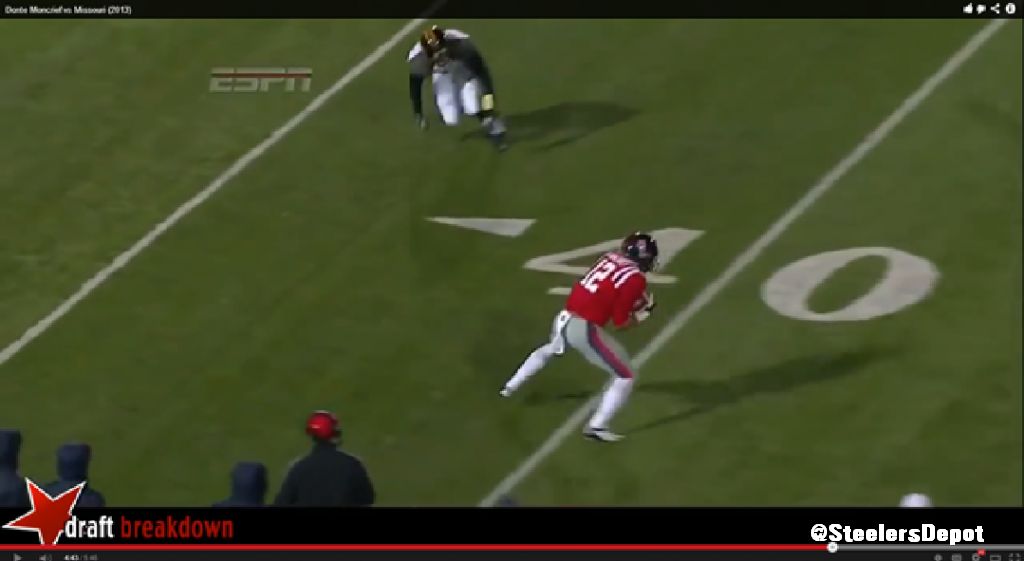 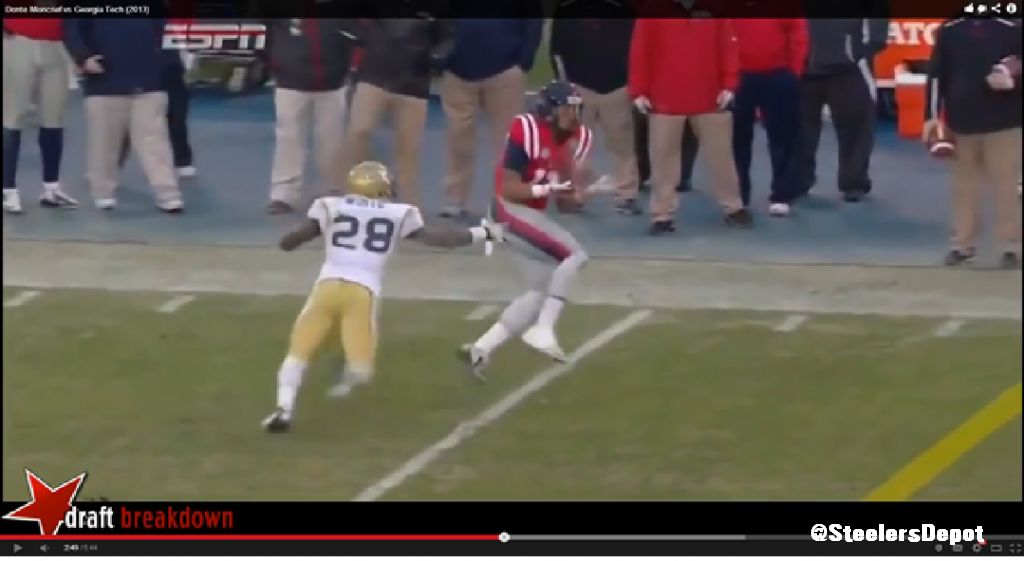 Critical drop in the end zone down by 14 against Missouri. Just inexcusable.

And on this post against Alabama that would have gone for a huge gain. Poked away by the defensive back.

On a fade in the end zone.

This doesn’t even count the times he only high points the football with one hand instead of two. Tries to make the spectacular catch. 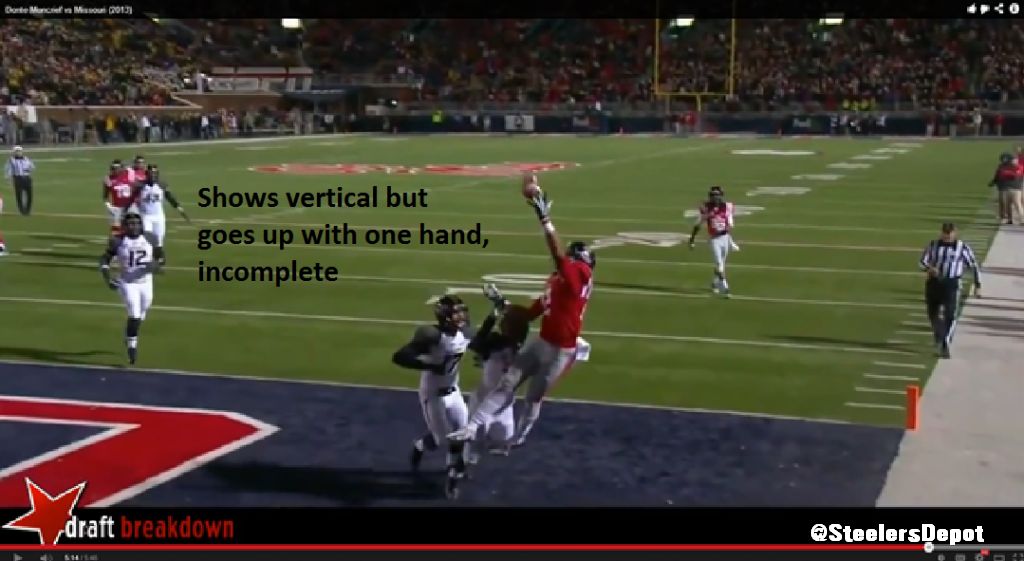 In the four I watched, I don’t recall him ever winning a jump ball. Concerning for a guy with that height and vertical. What I mean when I wrote he doesn’t play to his height.

Times where he doesn’t give effort. On this screen, once it turns into a scramble drill, Moncrief (top of the screen) just stands there and spectates. Doesn’t provide his QB any assistance. No effort in trying to get open.

Same after running this jerk route.

Keep in mind the stats provided in the “Other” category are all relative and I haven’t worked the numbers for most of the other receivers. Only category I have is the overall catch percentage. Of the 27 receivers I looked at, which included the top receivers, Moncrief’s 52% finished only ahead of Brandon Coleman.

It’s that inconsistency and what appears to be apathy that is holding Moncrief back. There’s no shortage of talent. While I haven’t taken a close look at the top of this class, Sammy Watkins and Mike Evans, I’d wager from a pure ability perspective, Moncrief is right up there. Just don’t see it often enough.

Steelers’ obviously need a wide receiver and it’s unclear if Mike Evans will be available in the first round. Means they’ll likely have to wait until Round Two or Three where Moncrief will be available. Even being fully aware of that ceiling, I wouldn’t take him over a player like Jordan Matthews.

He’s an intriguing player but not worth the hype he’s getting from some Steelers’ fans.

Games Watched: at Alabama, vs LSU, vs Missouri, vs Georgia Tech (Bowl)