Continuing to study one of the Steelers’ biggest needs, a look at another wide receiver. Fresno State’s Davante Adams.

– Ability to win off the line against press

– Natural hands and good body control, plucks away from his body

– Leaper whose vertical is an asset, high points the football

– Young and still growing as a player

– Small hands (9 inches, tied for smallest at the Combine)

– Must use hands better to beat press

– Sometimes a bit too passive competing for passes

– Fiery and perhaps a bit too emotional at times

– Touchdown reception in 22 of 26 career games

Adams’ name should be synonymous with acceleration.  Plays with the explosion of someone much smaller than him. No stiffness in his hips and perhaps the quickest feet in this class.

It’s that burst that allows him to win off the line. Watch him (bottom of the screen, #15) turn this San Jose State corner silly off the line. Inside step, gets the corner to open up, and then explodes  outside to catch the fade for a score.

Ditto against Nevada. This time at the top of the frame.

Pass overthrown by Derek Carr but you can see Adams maintain speed through his plant on the sluggo. Cornerback completely fooled and if the ball is on target, it’s an easy six.

Adams immediately hits top speed on this smoke screen, blows past the corner, and smoothly cuts back to avoid the safety. Another score. Dominated against lowly New Mexico, scoring three times.

Racked up a lot of YAC and his frame and strength makes it difficult for defensive backs to bring down.

At the Combine, Adams tied for the third best vertical, jumping 39.5 inches. Translates on tape with the ability to high point the football. 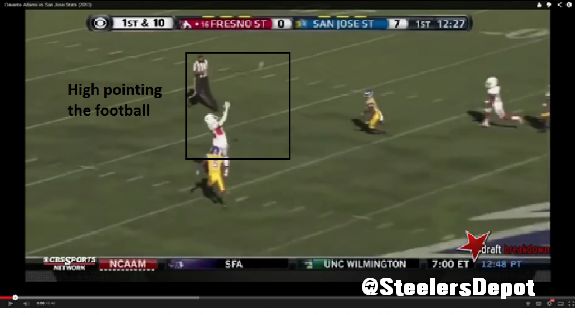 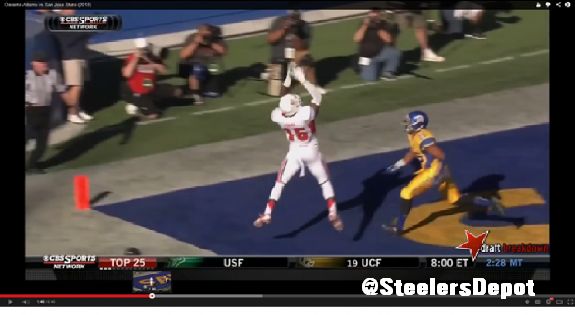 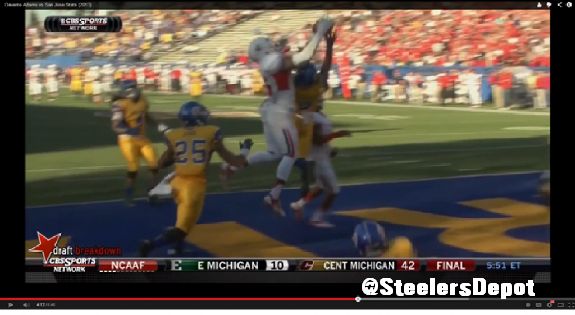 Statistically, you’d be hard pressed to find someone more impressive than Adams. His 131 catches led the FBS level. His 1719 yards only trailed Brandin Cooks. And his 24 touchdowns was eight more than the next closest in Division One. Against San Jose State, he caught 13 passes for 264 yards and three touchdowns. He did more in two years than many do in four.

To further put that in perspective, Adams caught more passes in the first seven games of 2013 than Martavis Bryant has in his entire career.

Of the 26 receivers I looked at, Adams’ catch percentage was third at 74.8%. 19 of his 25 receptions on third or fourth down moved the sticks. Thirteen of his touchdowns, over half, were inside the red zone.

Does not have “elite” game-breaking speed. Ran in the mid 4.5’s at the Combine and while he may play a tick faster than that on tape, he’s not Mike Wallace.

Didn’t like his effort in the run game. Poor run blocker who falls off blocks and doesn’t give as much effort as you’d like. Maybe it was because he played on a team that ran the ball less than 38% of the time last year.

Adams top of the screen in the GIF below.

Another adjustment he’ll need is using his hands better off the line. At Fresno State, he won because of his feet. The quickness to stutter step off the line and turn a corner around. Will have to incorporate using his hands to knock away the jam of cornerbacks in the NFL. They will be more physical and get into his pads off the snap so Adams can’t use his burst to swap hips. Something I’m sure he can do but will have to be repped.

Players like Adams are the reasons that support the thought the Steelers don’t need a tall wide receiver. Granted, Adams is far from tiny but doesn’t have the height someone like Mike Evans or Martavis Bryant possess.

If you the prerequisite is someone who must be “X” tall, you’re going to miss out on a lot of talent. Scouting the draft isn’t about turning the blinders on. It has to be approached with an open-minded. Talent trumps everything. Tall, short, it doesn’t matter. Give me the 5’8 dude with top-tier skill than the 6’5 player with a list of flaws.

Those clips of Adams winning on fade routes in the end zone? That’s skill to beat the corner off the line. Not a physical trait like height. Being tall is not the only solution to being effective in the red zone.

I’m not against height. Give me Mike Evans and I’ll be happy. I’m against focusing so much on height everyone else gets tuned out. If the talent says to take Evans or Bryant, go for it. If it points to Odell Beckham Jr or Brandin Cooks, that’s fine too.

Bottom line is Adams is a fantastic talent with the overall package you’re looking for at the position. He’ll fit the offense well. Has the burst to rack up YAC on smoke and bubble screens. Can win in the red zone and will dominate on your two basic concepts: slants and fades. Lack of elite speed doesn’t mean he can’t be a vertical threat either. Speed is good enough. His vertical and ability to go up and pluck the football are crucial components to being a deep threat.

If this class wasn’t so top-heavy and deep, he’d be getting a lot more fanfare. Still, I think scouts know him better than draftniks and will rate him appropriately. Could go higher than anticipated, top 25 to late first round.

But if he falls to the second? Pittsburgh better not think twice about selecting him.