After a short break during the free agency firestorm, back at it with our first look at a quarterback. Central Florida’s Blake Bortles.

Usually would add this at the end but wanted to preemptively say this. Clearly, the Steelers’ are not in play for Bortles or any of the top tier quarterbacks. As it says in the first paragraph, these reports are also dedicated to top players in the draft. Please hold your “article is pointless” comments.

– Impressive arm who can rip it with ease

– Lots of velocity on his throws between the numbers

– Impressive accuracy on the move, even when rolling to his left (right-handed QB)

– Wide base to derive power from

– Feels the rush well, can climb the pocket while maintaining eye level

– Pro style offense, played a lot under center, and asked to make nearly every throw/drops

– Shows appropriate touch on his throws when he has to

– Flashes ability to manipulate secondary with his eyes, move safeties off

– Size can make him difficult to bring down at times

– Throws outside the numbers have tendency to float

– Ball sometimes drops down to his hip, especially when on the move, creating a bigger windup

– Will lock onto defenders, sometimes won’t read coverages and ends up force throws

Bortles has been labeled as a “developmental” prospect by many but frankly, I struggle to see many flaws in his game.

Though it can be overstated, he throws a pretty deep ball. Big arm and just as importantly, accurate with proper ball placement.

You can have a Jeff George-esque arm but if the placement is poor, it’s useless. Back shoulder to the sideline. Right where that throw needed to be.

Although this pass ended up falling incomplete by the slimmest of margins, love the accuracy. Rolling to his left, Bortles is able to square his shoulders and throw a dime by the left sideline. Incredibly impressive for a right-handed QB.

Stills to show the same in a separate game. Not a designed rollout here but Bortles is flushed and rolls to his left. Sees his receiver breaking open across the middle of the field. 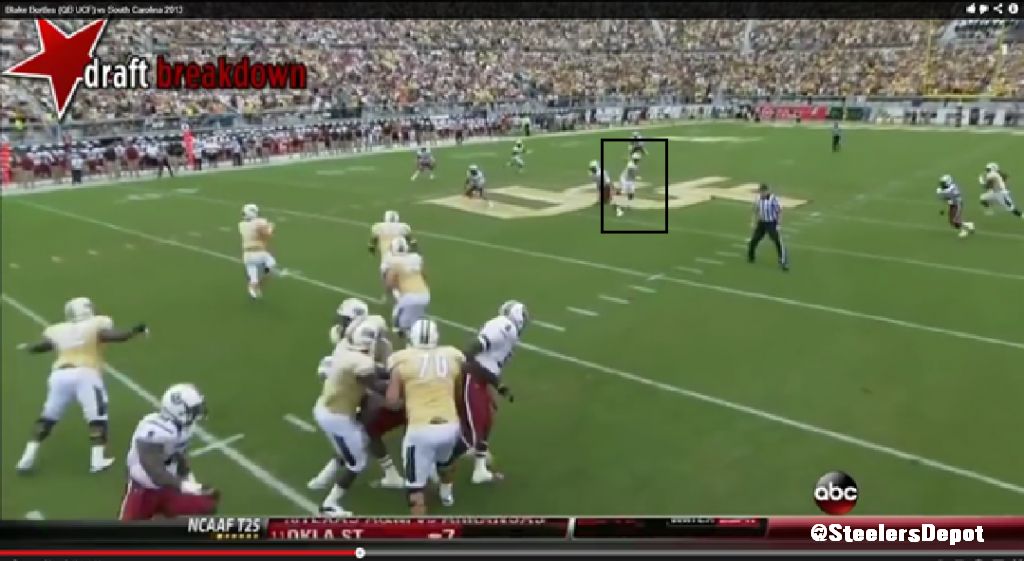 Gets his shoulder square and his front foot pointed downfield despite his momentum carrying him to the left. Completes the pass. 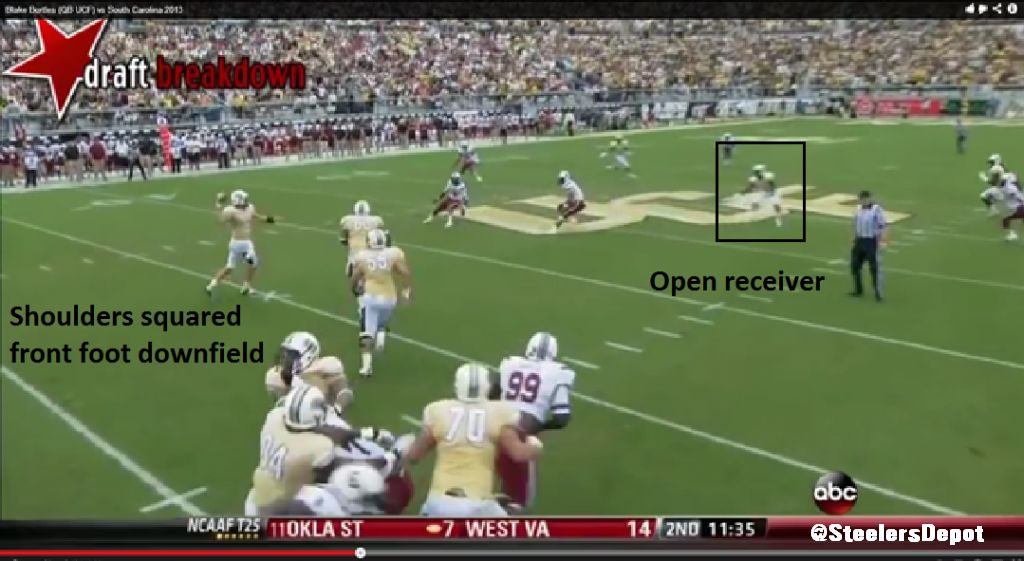 Shows good mechanics and although not a game-breaking run, a good deal of athleticism. Can’t be a statue and do that very easily.

For a “developmental” kid, he sure handles the rush well. Pressure doesn’t bother him and stands tall in the pocket. Penn State in Week Three, UCF’s first true test of 2013. Up by ten on 3rd and 8 in the 4th quarter, Bortles does this.

No, the throw wasn’t contested but to be able to throw the deep out facing “A” gap pressure on the road in a big situation like that is fantastic.

Feels the rush well and capable of climbing the pocket. Probably one of my favorite throws in the four games I watched.

Pressure coming, climbs, resets his feet, and throws a laser down the left sideline. Play I could watch all day and still be impressed by.

Love the eye manipulation here. Some next level stuff. Dino concept (double posts) and while the safety does naturally carry the #2, Bortles still looks him off, comes back to the right, and completes the pass.

Bortles will get a lot of comparisons to Ben Roethlisberger but that’s a bit of a stretch. They do both have great size and Bortles has occasionally used his size to shake defenders and extend the play. But it isn’t anywhere close to the level of what Ben can do. Bortles also has a much better arm than Ben. The closest comparison the two have is regarding their scrambling. Similar surprising athleticism.

Like I wrote, will occasionally lock onto his man and have tunnel vision, tuning out the rest of the defense. Resulted in a pick against South Carolina.

Pre-snap, sees a two deep shell. No rotation post-snap so Bortles thinks he has the middle of the field open to hit the strongside #2 receiver on a post. 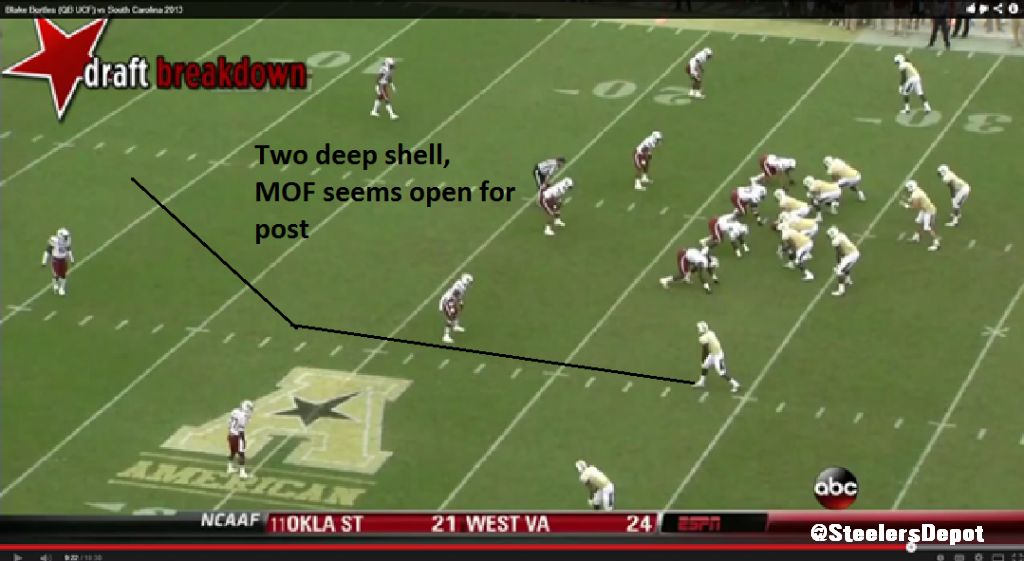 But he fails to account for the linebacker dropping and gaining depth. A Tampa 2 look. 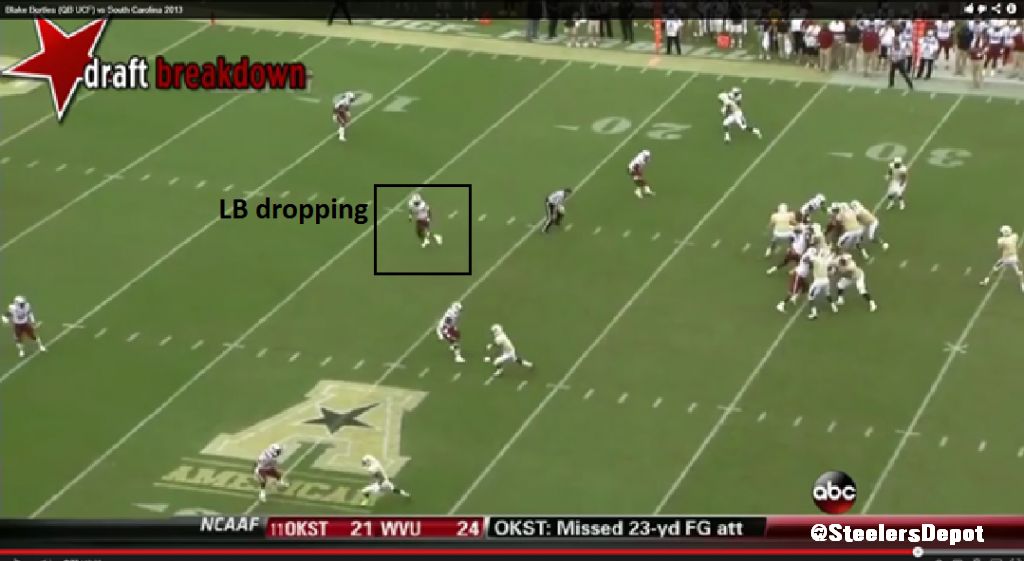 There is pressure that alters the throw but Bortles stares his receiver down and the pass is easily picked. 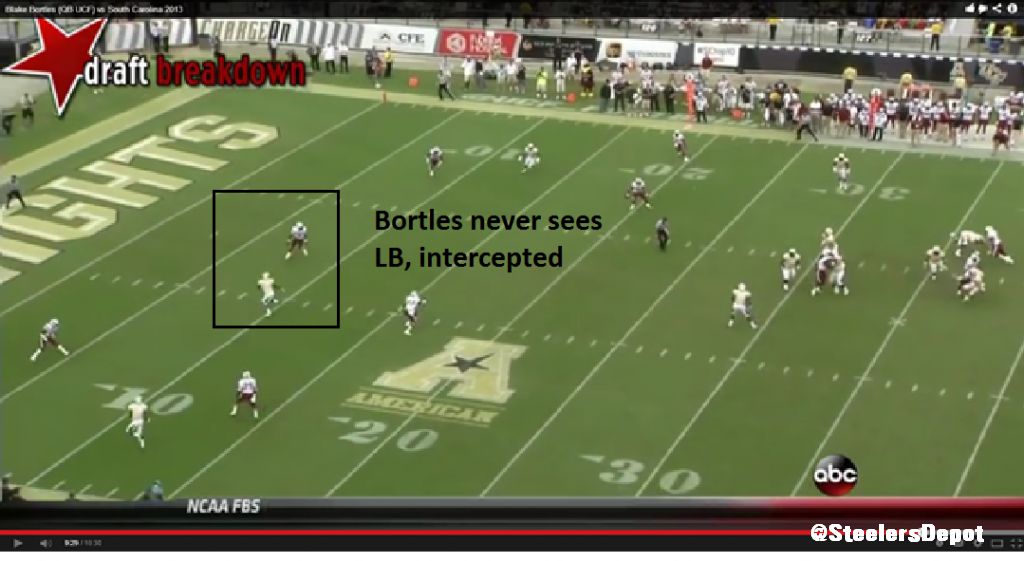 Probably nitpicking but some instances where his front foot isn’t pointing to his target. Causes some inconsistency with his accuracy and will need corrected. 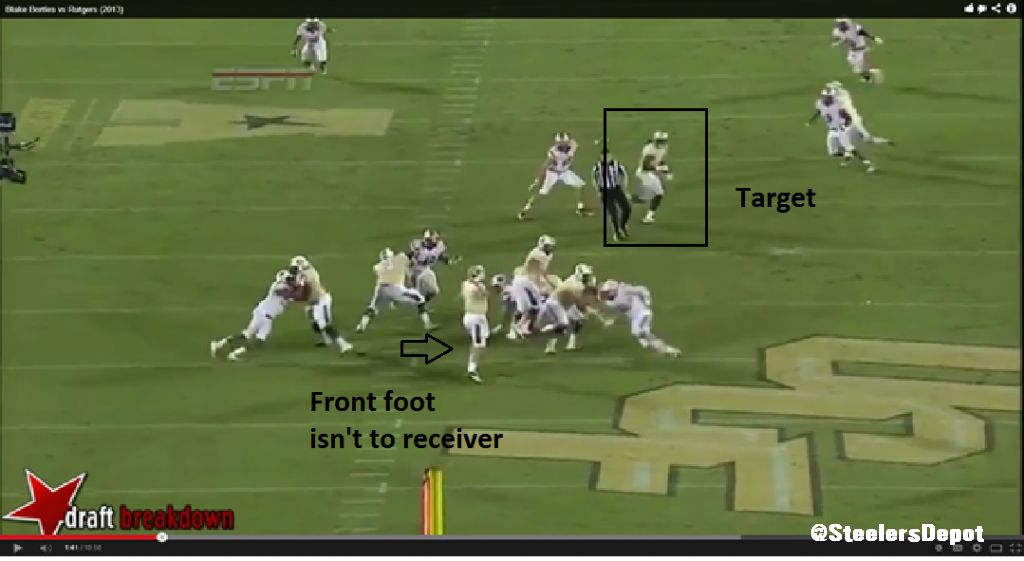 Does have a good arm but for whatever reason, his passes outside of the numbers (comeback, deep out) will float a bit. Minor but has to work on driving the ball better and showing better timing on those routes. Get the ball out quicker.

Lineman breathing down his neck but this throw floats and really shouldn’t have been made. Know he’s going to his second and third read but can’t wait to try and throw the comeback like this. Asking to get it under cutted and picked by a safety.

Mechanically, the ball sometimes drops down to his hip. Wasted motion and subsequently, time. 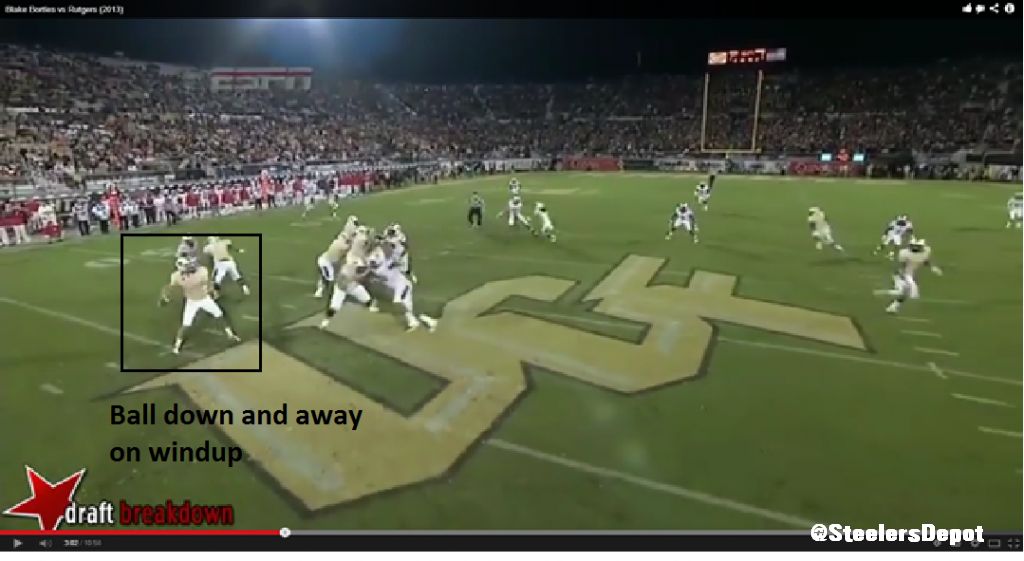 Still, these flaws are minor and shouldn’t discourage anyone from how good of a prospect Bortles is overall.

Watched Johnny Manziel but still need to evaluate and produce a report on him. Haven’t watched Teddy Bridgewater at all yet. But based on what I’ve seen from Bortles, he’ll be difficult to top.

Games Watched: at Penn St, vs South Carolina, at Louisville, vs Rutgers, vs Baylor (Bowl)