Our focus has shifted to the offseason and for the next few months, I’ll be providing scouting reports on several draft prospects. Some of these players the Pittsburgh Steelers may look at and others will be top players that will be off the board before they select. All to make you as prepared as possible for the 2014 NFL Draft.
A look at North Carolina defensive end Kareem Martin.

– Monstrous frame with a lot of room to grow

– Times where he looks dominant

– Relatively agile for his size

– Good motor, works hard to get the QB and doesn’t quit on plays

– Ability to stack “plus” plays

– Productive and a big senior campaign

– Versatility, played at both end spots, and in three down lineman fronts

– Extremely raw as a pass rusher

– Does not use hands well, need to be much more active

– Little to no repertoire

– Fails to stay square to his block

– Didn’t appear to have much experience dropping into coverage

– Best fit at next level?

– 41 career starts for the Tar Heels

Martin’s 2013 numbers may look gaudy but this is a case of the stats and the tape not really matching up.

Physically, Martin is a player who you’d want to be one of the first to come off the bus. Looks the part with a set of long arms. Uses them well, too. Understands hand placement and works to get them extended in both phases.

Still shot of him getting his arms into the pads of the left tackle while bull rushing. Doesn’t have a ton of upper body strength but it’s that asset which allows him to collapse the pocket. 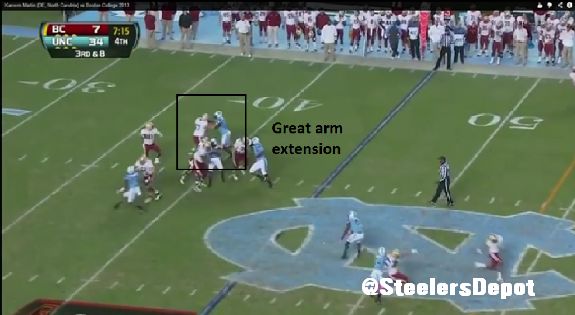 Shows similar against the run. Gets his arms extended into the left tackle, blows him back, and forces the running back to bounce the play to the outside.

Does keep working hard as a pass rusher here and eventually counters to bring down the QB.

Over the course of two drives in that BC game, Martin had two sacks and knocked the right tackle on his butt in a separate instance. Guy that gets on a roll and stacks positive plays.

He’s a pass rushing paradox. Sack numbers are big, ranked in the top ten at the FBS level as a senior, but he isn’t a special pass rusher. Just doesn’t have any moves. From what I observed, some of his sacks were “gimmies”. Example being unblocked on this zone read against Miami.

His statistically most impressive game came against Pitt, recording 3.5 sacks. Though I didn’t watch it in full, he was aided by some poor line play from the Panthers. One sack came as a result of a stunt not being picked up as well as it could. Another came from the quarterback being flushed out of the pocket, giving Martin a clean route to bring him down. The Tar Heels caught Pitt on a bad day, sacking Tom Savage seven times.

Granted, all pass rushers are going to snag a couple of “gimmie” splash plays but it serves as a reminder statistics don’t always tell the whole story.

For a player that is stiff with inactive hands, he’s going to struggle to generate pressure at the next level. His sophomore and junior season totals of four sacks each  feels more in line of the type of player you’re getting.

Was excited to watch the Boston College game because Martin would be facing a pro-offense. One that runs a ton of power schemes (Power O, Counter OF) and a true indicator of how strong and how well against the run Martin would fair.

Doesn’t do a good job staying square to blocks either. Fails to use his hands so he can stack and shed. A major reason why he’s susceptible to getting turned and washed. Still shots of him taking on this trap block from the left guard. Turns his shoulder into the block and gets sealed to the inside without much issue. 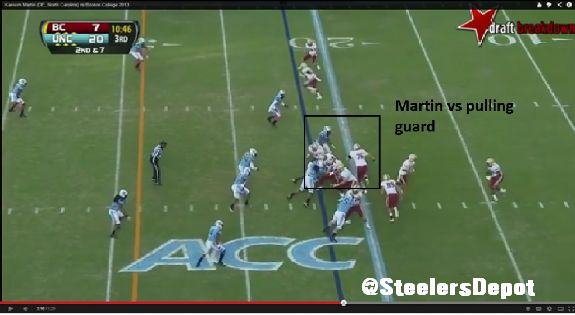 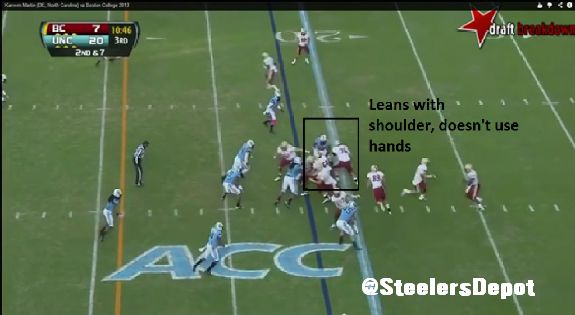 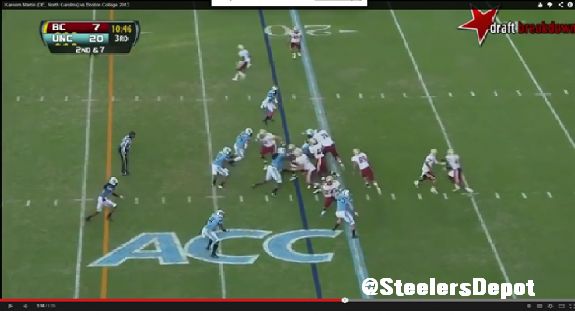 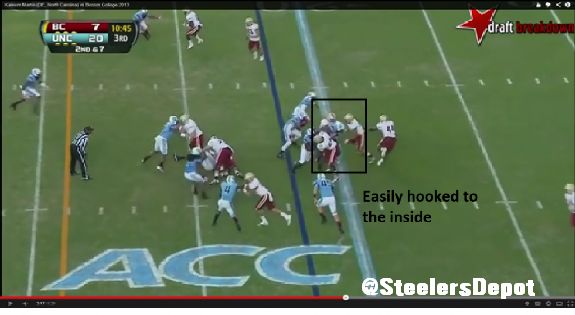 From a Steelers’ fan perspective, this was my most burning question. Don’t envision him standing up full-time at OLB. Too tall and stiff to consistently be asked to bend around the edge.

He has the frame to add on the weight but his strength and technique leave a lot to be desired. Can’t envision him being a five tech and subsequently, a good fit for the Steelers.

Best chance of success for Martin will come as a 4-3 end who is asked to shoot gaps more often than hold the point. At his best when he gets to be in control rather than two-gapping and anticipating.

At this point, more of an athlete, albeit an impressive one, than a football player. Nothing the Steelers should be interested in.

Games Watched: vs Miami, vs Boston College, vs Cincinnati (Bowl)