With the regular season over, our focus has shifted to the offseason. For the next few months, I’ll be providing scouting reports on prospects. Some the Pittsburgh Steelers may look at and other top players that will be off the board before they select. All to make you as prepared as possible for the 2014 NFL Draft.

– Gets his arms extended in both phases, uses them effectively

– Gets fantastic push in the run game

– Ability to anchor vs bull rush

– Can use length/strength to seal edge and push end upfield

– Finishes his blocks in the run game, shows some fire and nasty

– Plays with wide base, helps him cover ground in pass pro

– Surprising burst off the ball in both phases, decent in space

– Versatility along the line

– Held own against NFL prospects

– Maybe not a natural fit at left tackle

– Tendency to bend over at the hips, some flatback in pass protection

– Doesn’t maintain his base while sliding, vulnerable to inside rushes/counters

– Feet will go dead on his punch

– Not always able to reach/stick at the second level

– Occasionally will get overextended as a run blocker

– #6 OT in nation by ESPN coming out of high school

– Only two sacks allowed in 506 attempts as a senior

You don’t judge a player solely from his Combine numbers. If you did, you’d be missing out on a potentially solid prospect. Because Moses’ Combine was horrendous. Ran the worst ten yard splits of any offensive lineman there and looked awful in drills. The purpose of the Combine is to force scouts to go back and re-watch the tape and see if the two performances match up. For Moses, they don’t.

I expected to see a sluggish, lumbering left tackle. He’s not natural left tackle(more on that later) but a heck of a lot better than I anticipated. Has a burst off the edge and was rarely beat to the outside. And he uses his strength and length effectively to get push speed rushers upfield. Moses wears #78 and spent 2013 as the Cavs left tackle.

And a still to show the arm extension he gets. Attaochu tries to dip around the edge but Moses gets his long arms into his body and doesn’t get beat. Really like not just the length but how effectively Moses uses it. 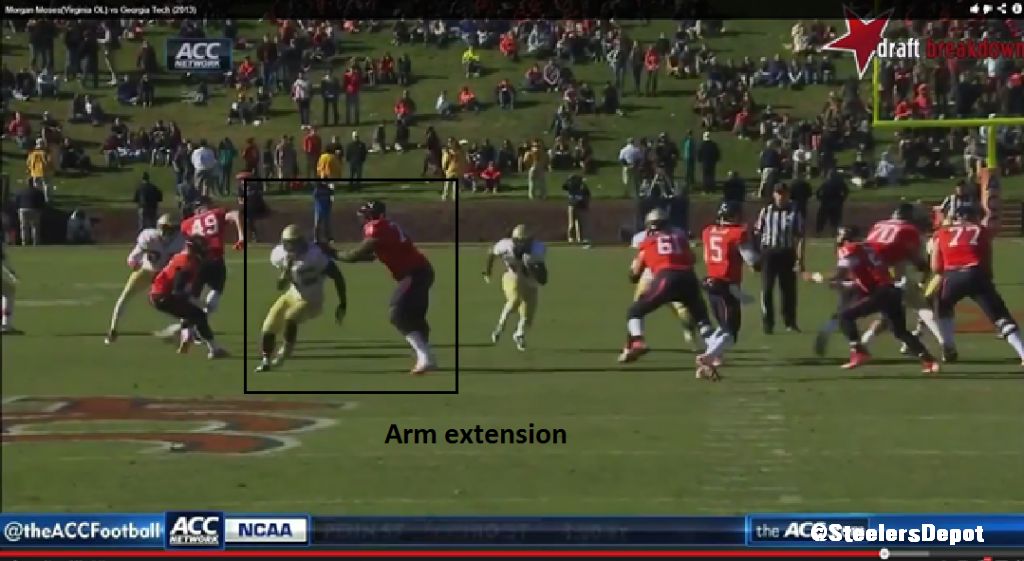 Because of that upper body strength, can anchor against bull rushes. Shows it early in the year against Oregon.

Sometimes, he’ll just knock someone’s head off in pass protection, too. Always nice to have on your side.

And you see that length and leverage in the run game, too. 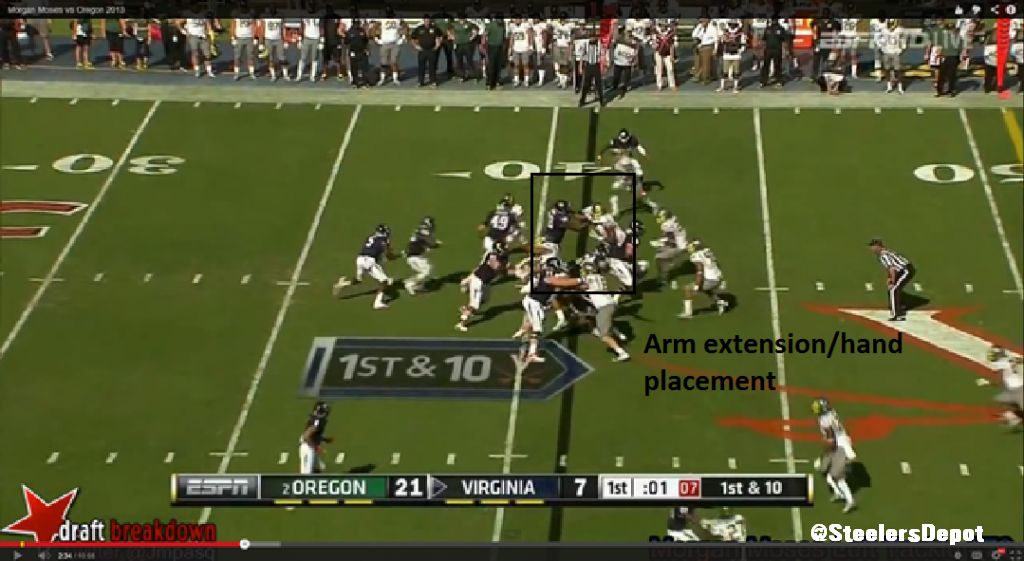 Has the strength to dominate as a run blocker.

Effectively takes out two defenders on this reverse.

Although my expectations were relatively low based off the Combine, I came away impressed with how he did in college.

But does it translate? I see some qualities in Moses I currently see in Mike Adams. Has the natural gifts. Huge frame. Long arms. Innate strength. Some athleticism. But he’s not a technician and appears to be getting by on those physical tools. Won’t last at the next level. At least, not at left tackle.

Issues with his foundation. It’s not terrible but there is a tendency to lean over. Leaning Tower of Pisa foundation I noted with Antonio Richardson. See some flatback in pass protection I’d rather not. 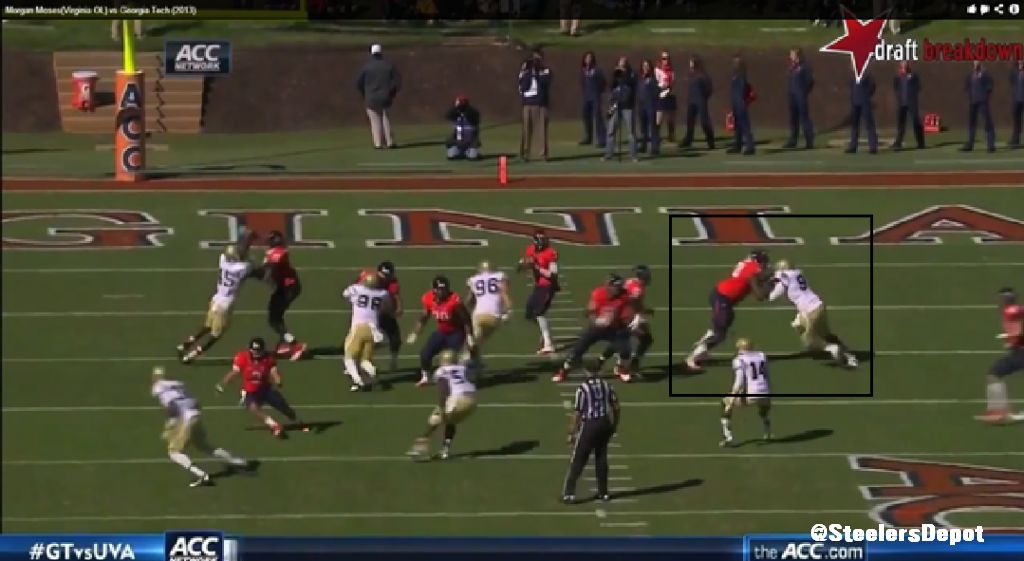 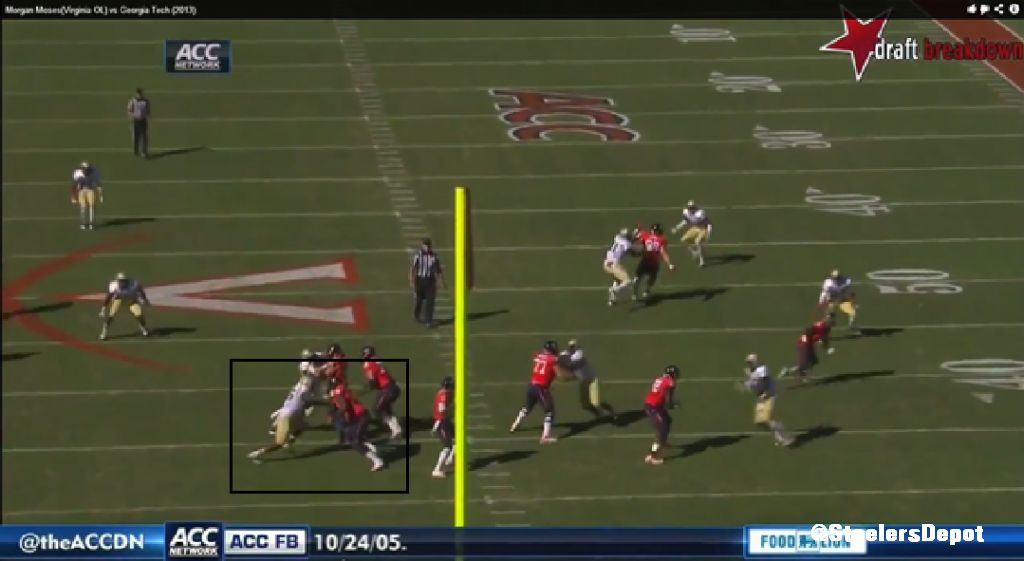 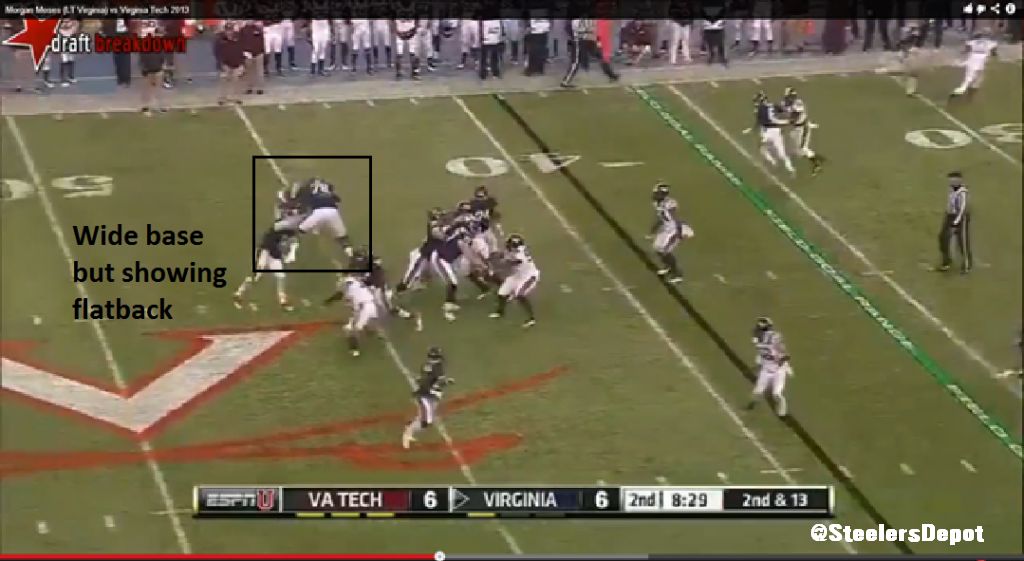 Problems with his base. Feet will stop on his punch and he is forced to use his length to seal the end upfield.

Same play but broken down in stills.

Kickslides off the ball (does show that wide base) 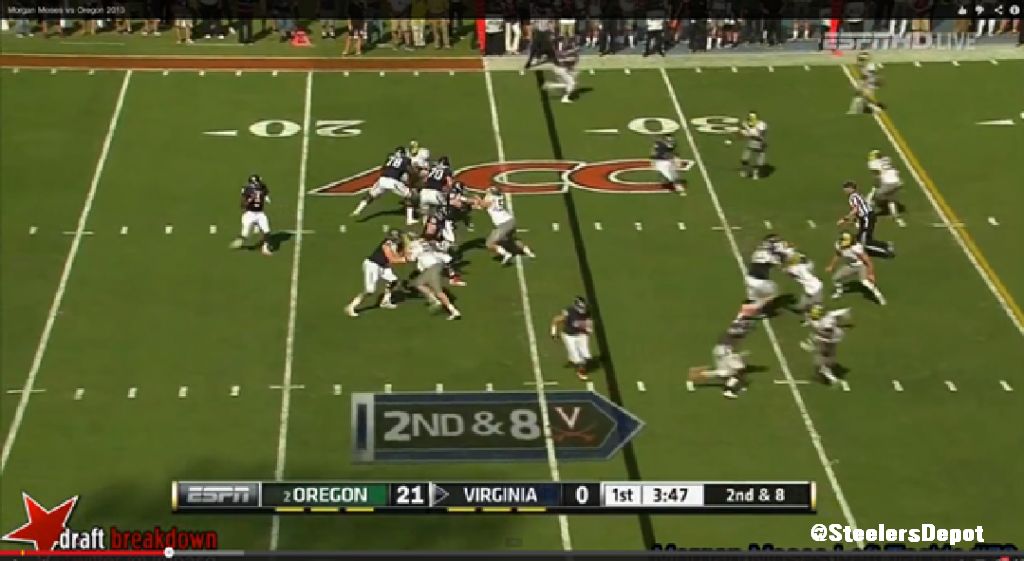 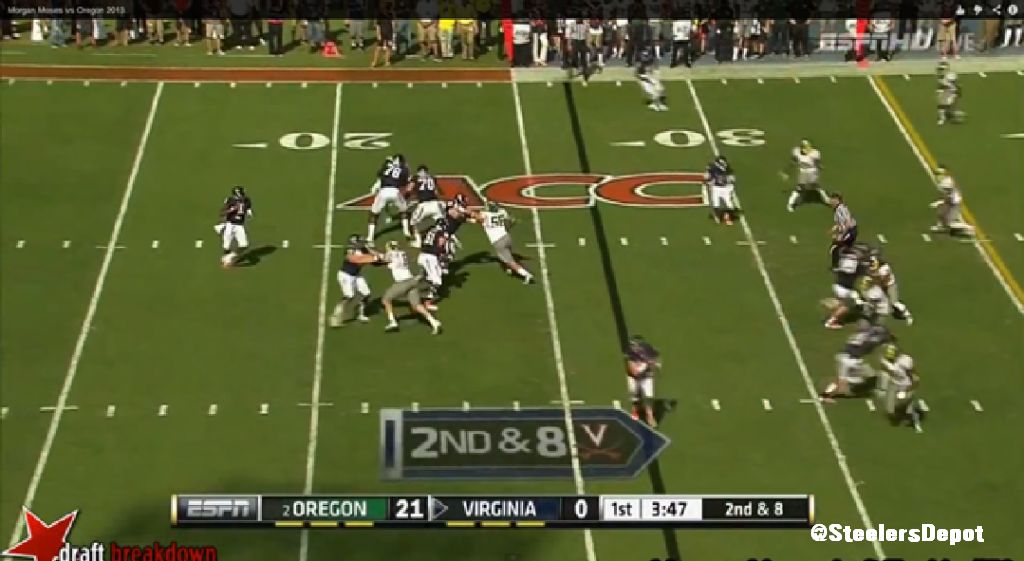 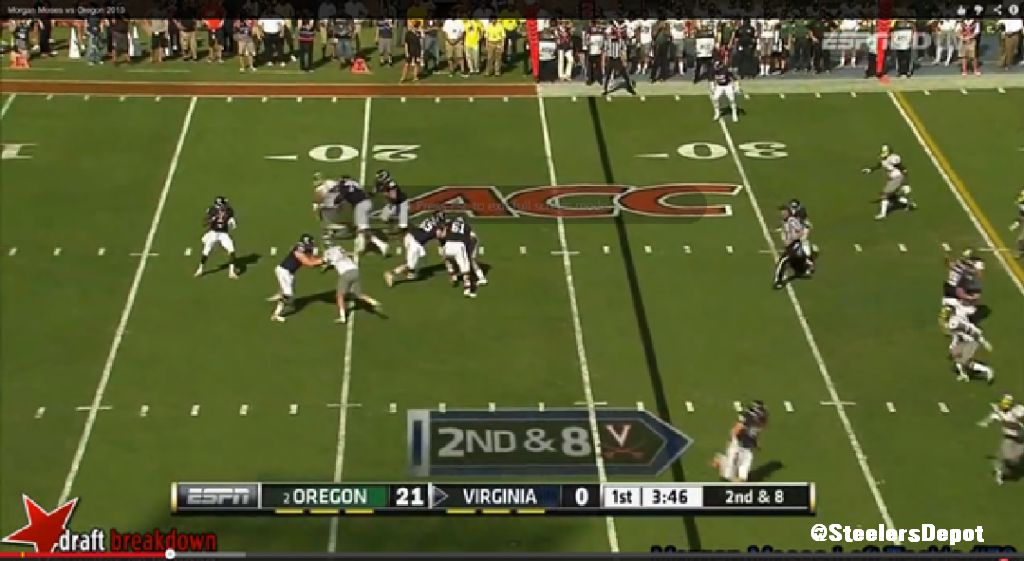 His kickslide isn’t bad but when sliding laterally, he’ll lose his base. 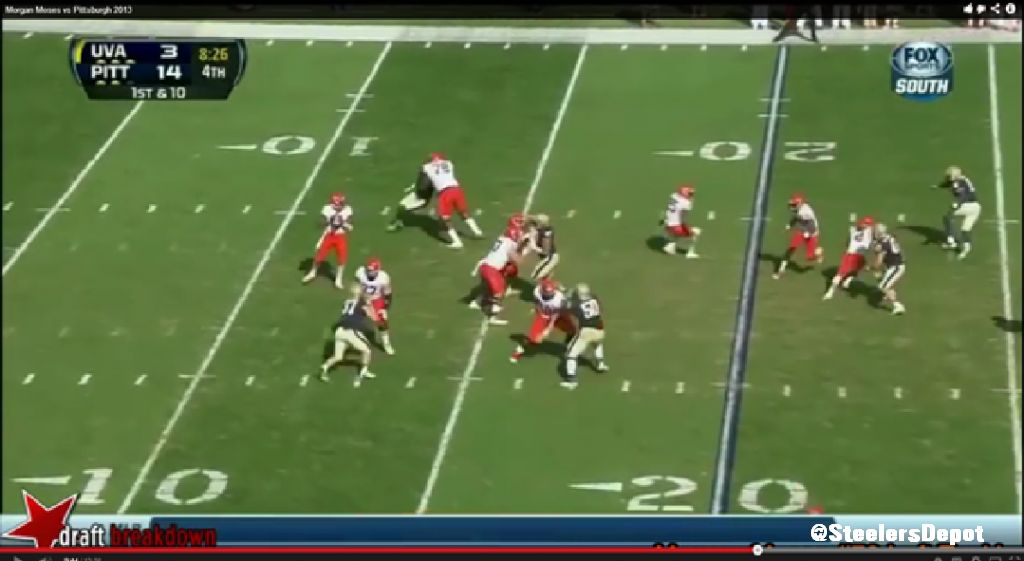 In my gut, he isn’t going to stay at left tackle. That sentence needs to be qualified with the realization that he has only spent one year on that side and isn’t likely completely comfortable there. Especially spending the previous three seasons developing the muscle memory to kickslide from the right side. Flozell Adams has compared it to writing with your other hand.

Still, I see Moses as a right tackle who will be a strong run blocker and at worst, average pass protector. Going to have to really work at his technique and clean it up. Will no longer be able to get solely by on those physical traits. But the potential is there and he likely won’t struggle with it as much as Mike Adams. That’s borderline impossible. Now, if Moses can’t overcome that, then he’s not going to be a starting-caliber tackle. Leap of faith involved with selecting him.

As we’ve talked about, the Steelers don’t have a pressing need for an offensive tackle. The principle to be taken away from this is the concept that tape overrides what you see at the Combine.

Games Watched: vs Oregon, at Pittsburgh, vs Georgia Tech, vs Virginia Tech