With the regular season over, our focus has shifted to the offseason. For the next few months, I’ll be providing scouting reports on prospects. Some the Pittsburgh Steelers may look at and other top players that will be off the board before the Steelers select. All to make you as prepared as possible for the 2014 NFL Draft.

Heading back to the trenches to evaluate West Virginia defensive end Will Clarke.

– Tons of length and a frame to be grown in to

– Capable of getting arms extended

– Can shed in the run game

– Versatile, lined up at multiple techs on both sides of the field

– Doesn’t always show the tools he has

– Not an elite athlete

– Can get stuck as a pass rusher, needs to use his hands more and develop more of an arsenal

– Can get pushed upfield as a consequence

– Needs to add more bulk to his frame

–  Too finesse at times, won’t always show his strength

– Won’t always stay square to the ball, get turned around and/or washed

– Only one year of true production

Big area to focus on is Clarke’s inconsistency. He has the tools, his size and length are rare, but doesn’t always put them on display.

Reverse pancakes the left end (Clarke is #98) and then rips the quarterback’s helmet off, forcing an incomplete pass. Plays that make you feel like you’re watch tape of Jadeveon Clowney.

Gets into the right tackle’s pads, keeps his lower half churning, and knocks the offensive lineman to the ground. Can’t finish the sack but flushes the QB and forces him to run for a short gain.

Knocks the right tackle off balance with his punch below.

He’s best against the run. Really like his strength and recognize he can get even stronger if he wants to add weight to his frame.

At left end, holding the point, shedding, and helping to make the tackle.

Holds the point against the right guard, pushing him back a yard.

Because of his size and the fact he’s so long, he has trouble with speed rushes. Similar to what was seen with Jarvis Jones, can get pushed upfield.

Does end up recording pressure but generated because of the left tackles lack of lateral movement. Clarke still can’t bend and dip.

Trying to rip but can’t quite turn and get the edge. QB able to climb and make the throw.

A still shot to illustrate it. 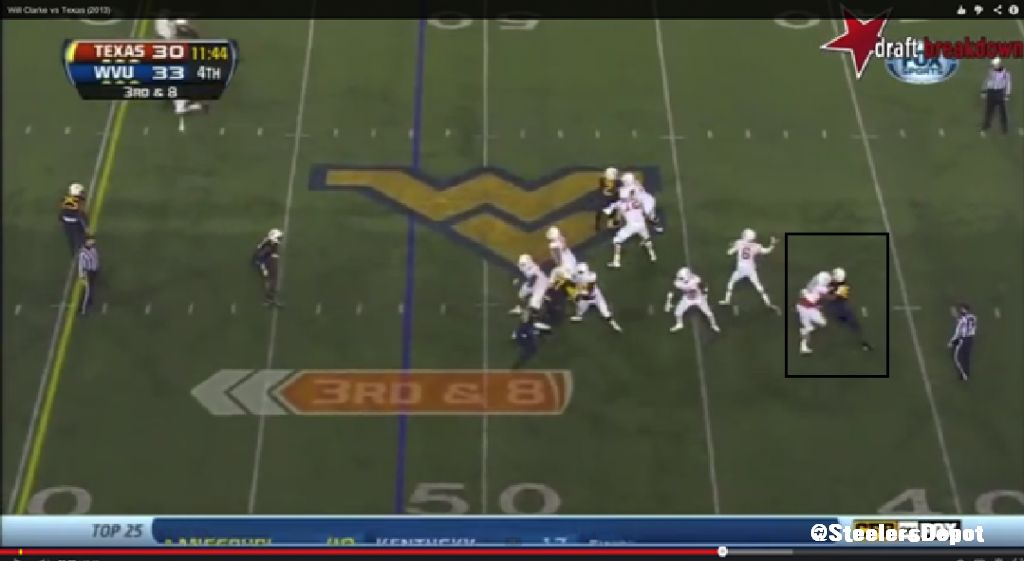 Must use his bull rush a lot more as a pass rusher. Will never be a great threat coming off the edge despite being a good athlete. Simply doesn’t have the bend.

Against Texas, he was struggling to stay square against the run. Got turned and washed repeatedly. Examples below.

Tight end driving him out of the play.

Run action and he gets completely turned around. 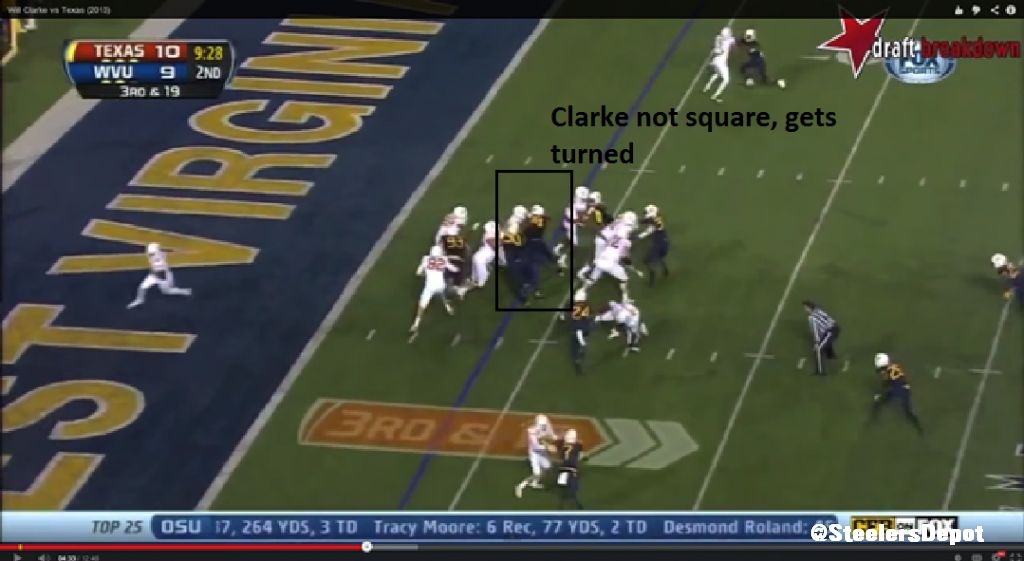 Not an issue of staying square but seemingly a lack of strength on these next two plays. In the first, he may be watching out for a screen, but no way he should get pushed downfield like this.

Gets a gift, rushing against a running back, but the back wins this battle. Stonewalls him. Strange.

Schematically, his versatility is a big plus. Lined up all over the defensive line. Used on stunts and appeared to be in man coverage on the running back once against Texas. 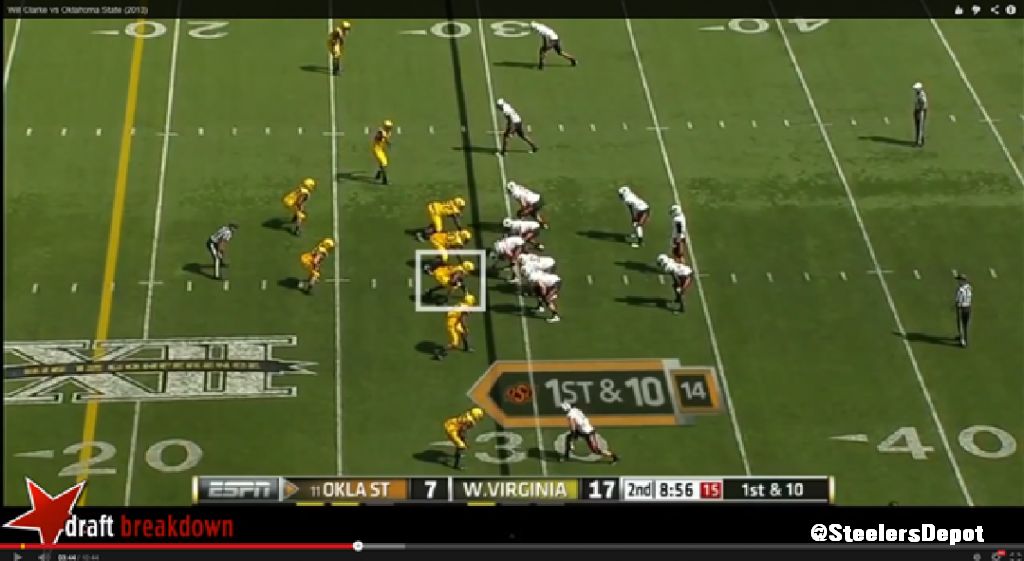 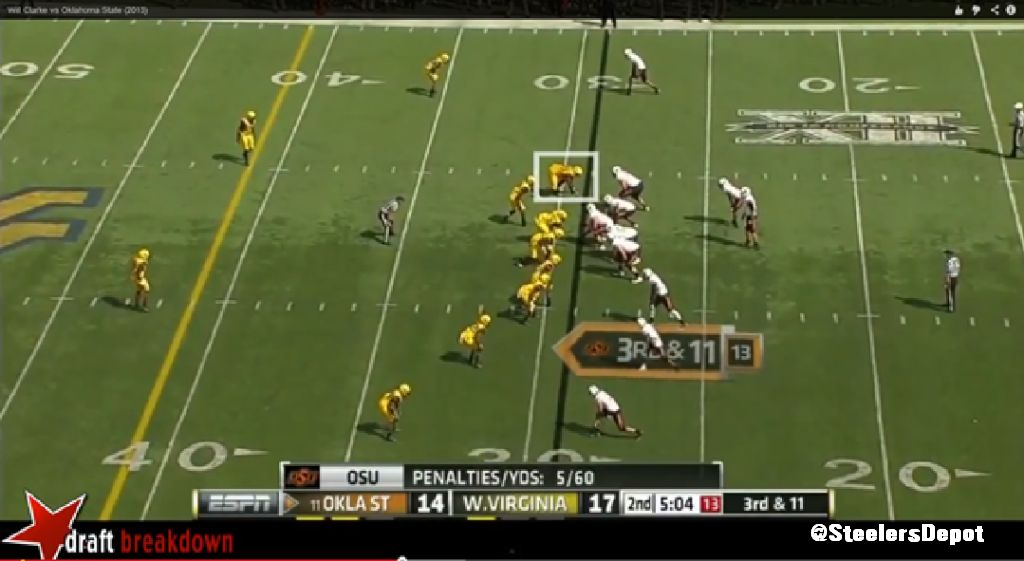 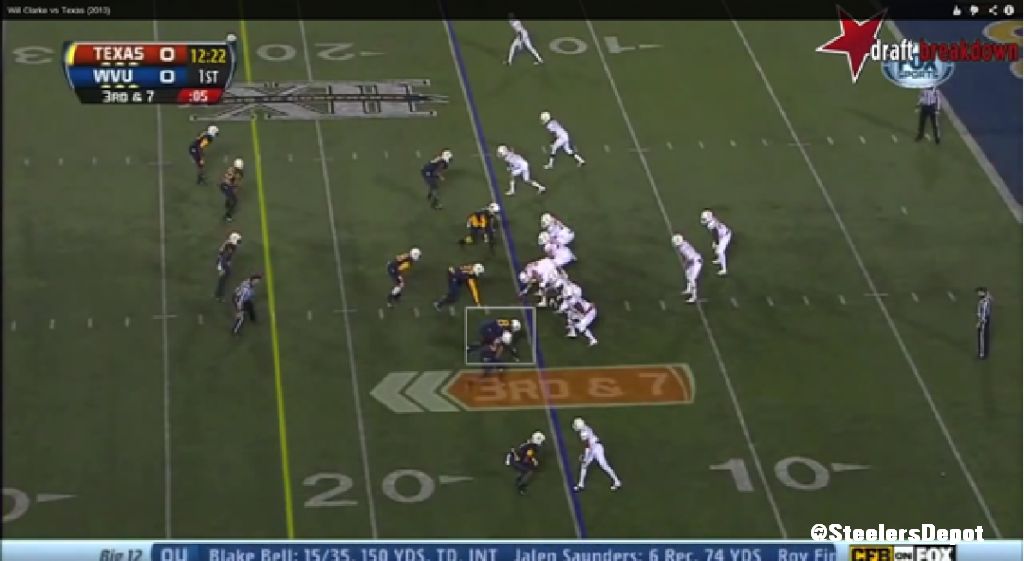 Fits into a 3-4 end at either spot or in a 4-3 at left end. Can kick inside to tackle in subpackages. Adds to his value.

The flashes are enticing but he must become more consistent. He’s a Day Three pick.

Games Watched: vs Oklahoma St, at TCU, vs Texas