Requested by a reader, a report on Central Florida running back Storm Johnson. Can’t guarantee I’ll get to every single one, but if there’s a player you’d like us to take a look at, leave a comment below.

– Fills out his large than average frame and possesses large lower half, big thighs

– Shows a good burst, builds up his speed quickly

– Capable of getting skinny through the hole

– Strength to run through arm tackles

– Speed not quite elite but very good

– Enough leg drive to push the pile at times, gain some YAC

– Was used out of the backfield

– Not much wear and tear

– Not terrible but not particularly powerful runner

– Drops too many passes, will show alligator arms on receptions, not very reliable

– Only one season of starting experience/solid production

– Caught 30 passes for another three scores

– Originally committed to Miami (FL), rushed for 119 yards with them his freshman year

– Transferred and forced to sit out the 2011 campaign

– 2013 was his only collegiate season with more than 113 carries, total of just 112 previously

– Middle name is actually “Storm”, not a nickname

There’s a lot of tape that makes Johnson look like an appealing prospect. He’s a bigger back, although not overly imposing, but does not waste any time to build up his speed. Has an impressive burst, exhibited below. Watch him explode through the hole en route to a sizeable gain.

Maintains speed as he changes direction. Ducks to the outside for another big chunk. Very fluid in his cuts. Again, this is not a tiny scatback. It’s a 215 pounder.

His second gear is special. Can turn on the jets. Referring back to the Penn State game, we see it on this run. Gets to the edge, turns upfield, the safety can’t make the tackle, and outruns the secondary into the end zone. Maintains balance the last five yards, too.

Similar here in his redshirt sophomore year against Ohio St. Beats the safety though is eventually taken down from behind.

Granted, neither safety takes an NFL-caliber angle to the back but still impressive runs.

That speed doesn’t always need to manifest itself into a “splash” play either. Sometimes, it’s merely avoiding a loss to pick up a few yards.

Against the Buckeyes, the linebacker reads the play and closes, but Johnson has the speed to get to the edge and get upfield. Turns it into a gain instead of a loss of one.

Other positive “detail” traits is his vision. Doesn’t dance and when it’s a “gotta have it” run, he won’t mess around. 3rd and 2 in the bowl game against Baylor, finds the hole, plants and gets upfield. Moves the sticks.

Tossing away any technical jargon for a moment, he’s a playmaker. Up by seven in the 4th quarter of the bowl game, he reels off a 40 yard run. Three Baylor defenders that appear to have him boxed in ten yards into the run but he cuts and explodes upfield, leaving them behind. Helped preserve the win.

A still from the above below to capture how the Baylor defenders had closed him in. And he still escaped. 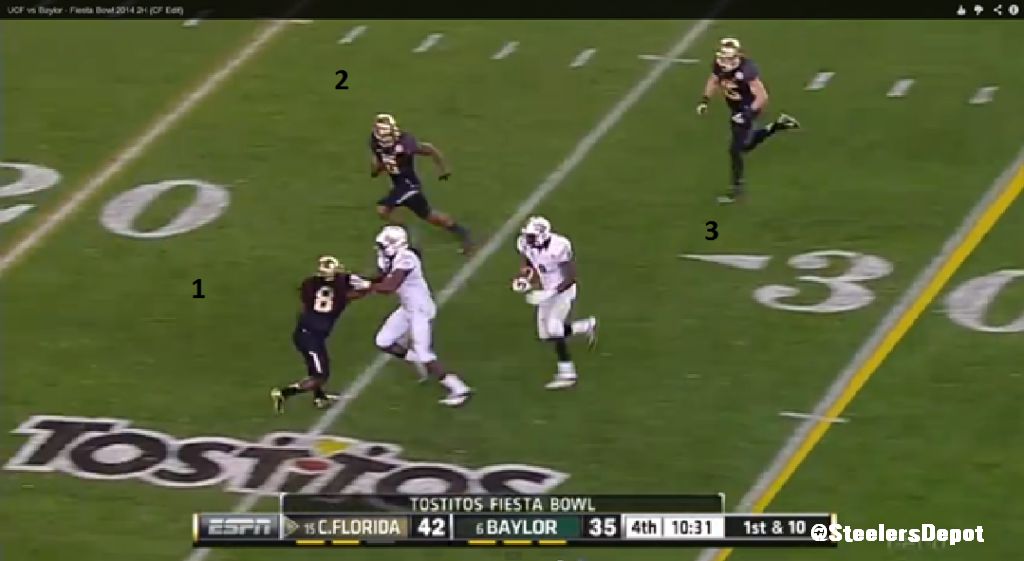 So why hasn’t Johnson gotten more love from draft circles?

There isn’t a ton of tape on him. Just 113 carries in his sophomore season. 2013 was his first year as a starter in college. And he wasn’t the full-time back either. Got about 2/3 of the carries. Rotated out a good bit. Were times when he was off the field for an entire drive. Was often able to play with fresh legs. In his final five games, all close contests mind you, he only had more than 16 carries once. Saw games of 10, 11, and 14 carries. Good and bad with it. Doesn’t have much mileage but don’t get the chance to see much week to week, year to year consistency you’d like as a scout.

Johnson has two negatives that could severely curtail his involvement as a rookie. Fumbles and shoddy pass protection.

Had to comb through it myself but by my count, he had seven fumbles in 2013. Not all of them were lost but that’s irrelevant. Has to take better care of the football or he won’t stay on the field. Can’t fumble once every 30 carries. Won’t last long at the next level.

Storm turns it over in his own territory against the Bears.

Johnson did snag 30 receptions and can flash out of the backfield on screens/flat routes, but will drop too many passes. No reason to jump for this screen and he can’t corral it.

Drops passes in the two animations below, possibly hearing footsteps and making a “business decision” on the latter.

He plays scared in pass protection. Doesn’t look to square up and take the defender head on. Prefers to try and cut. Looked awful in the bowl game.

Hypothetically, if he was drafted by the Steelers, he’d get a rude awakening in the backs on backers drill come camp.

As mentioned in the notes, he isn’t a particularly physical or powerful back. But isn’t completely lacking there either.

Lot of things to like about his game and still a young back that hasn’t gotten to play a ton of football. Room to grow. Excellent Day Three value.