Breakdown of the mid-round cornerback I referred to in my Ross Cockrell article. Missouri’s E.J. Gaines.

– Physical and willing to get his nose dirty, will factor in the run game

– Above average feet and change of direction

– Not a great athlete but sneaky speed and times well

– Smart in coverage and uses sideline to his advantage

– Won’t wow you as an athlete

– Interception numbers are a bit misleading

– Not always a fundamentally sound tackler, times where he’ll cut instead or wrap or lead with shoulder for a big blow

– Missed just two games in career, sitting out twice in 2013 due to a quad injury

– Three-time Missouri CB of the year

Normally, when we talk about corners, we’ll first focus on their coverage. With Jason Verrett, it was quick feet and explosion. With Darqueze Dennard, his physicality and press coverage was at the forefront of his scouting report.

What I admire most about him is his tackling ability and willingness to support the run. Something I failed to see in guys like Cockrell and Victor Hampton. As I’ve mentioned, that’s equally as important to the Steelers’ as coverage skills.

Closes on this curl route against Tennessee, not allowing any YAC.

Didn’t have to run that hard. It was 2nd and 16 and Manziel was going to run out of bounds anyway. Plays like that show Gaines’ tenacity and desire to embrace the physicality of the run. Lots of cornerbacks would shy away from that type of contact.

Doubled-teamed on this trap block against Vanderbilt. 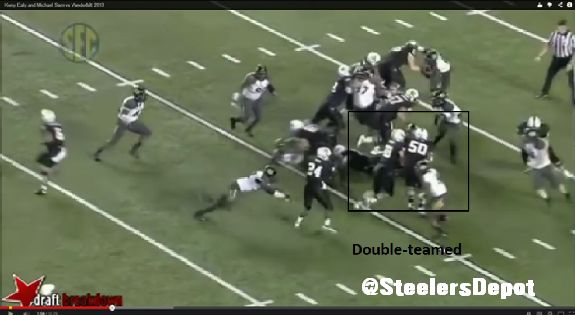 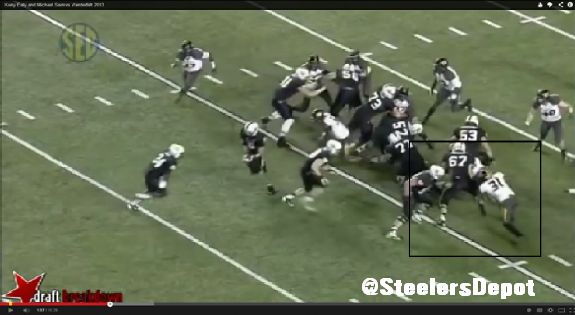 If I had to venture a guess, Gaines had the most tackles in 2013 of any cornerback in this year’s draft class. Stats don’t always tell the story but his 75 takedowns show how often he got his nose dirty.

It wasn’t as if teams picked on Gaines in coverage, either. Didn’t see many targets his way. Pass deflections fell from 11 in 2012 to three in 2013. Ended up watching seven games of him in an attempt to get a better feel for his coverage skills.

Didn’t see anything superbly impressive in that facet. But the numbers don’t lie. His toughest test came against Mike Evans, the #2 wide receiver to most draftniks. Gaines’ performance needs to be qualified with the realization Missouri plays a good deal of zone, but he lined up against Evans on nearly every single play. And the Aggies’ monster receiver was shut down to the tune of four catches for eight yards. The latter stat obviously a season low.

Missouri went on to beat Texas A&M, and Gaines had a lot to do with it.

Thought he handled himself well against Jordan Matthews and Donte Moncrief. Didn’t allow any splash plays. Those receivers did their damage against other members of the Missouri secondary. Not Gaines.

There were multiple games where Gaines was asked to play just the left side of the field. But others where he moved to the slot or a “rover” position. Has experience moving around the field which can only help him at the next level. 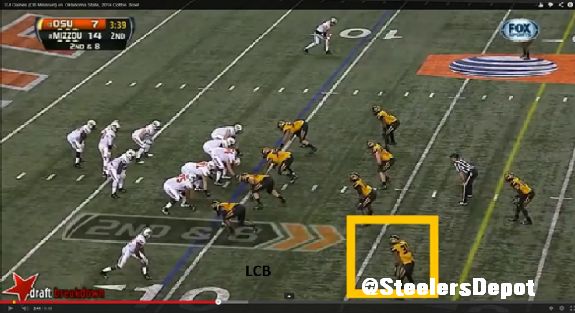 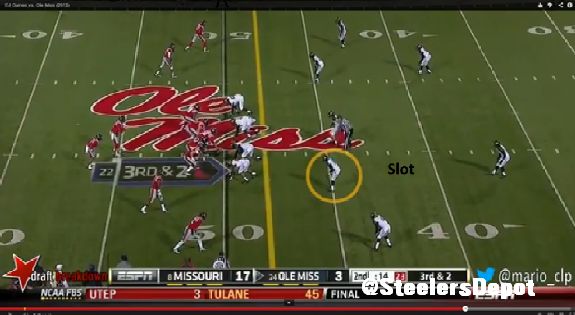 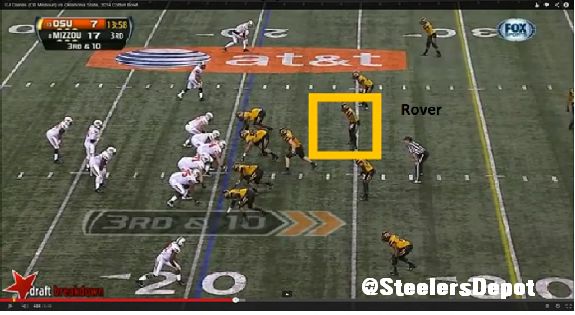 Stats will show he had five interceptions but none of them seemed to be difficult plays. More of him taking advantage of some lame duck throws. Like this one against Tennessee.

Can get beat deep in coverage and even though he ran well at his Pro Day in March, he likely does not play to that low 4.4 speed. Post gets him against Georgia.

And there are times where he loses his form as a tackler, going for the big hit with his shoulder.

Does make the tackle here and shows his willingness to deliver a blow but not what you’re taught as a defender.

Gaines will never be a polarizing prospect and for those teams trying to find a cornerback that will fit in a man heavy scheme, it’d be wise to look elsewhere. But for what the Steelers are looking for, Gaines fits. Allows the Steelers to focus on other wants/needs in the first round and still get a solid cornerback in the third or fourth round.

Games Watched: at Indiana, at Vanderbilt, at Georgia, vs Tennessee, at Ole Miss, vs Texas A&M, vs Oklahoma St (Bowl)