Breakdown of perhaps the tallest cornerback in the draft. Keith McGill out of Utah.

– Turns his size into physicality in coverage, will mix it up with receivers in coverage

– Length an asset playing the ball

– Helps him high point and can knock away passes most corners can’t, large radius

– Special teams work, even in his senior season

– Inconsistent against the run

– Tends to be a shy tackler who doesn’t seek contact

– Will tackle too high on his attempts and uses the sideline as a crutch, prefers to push and shove than wrap

– Average closing ability and allows too much YAC

– Does have some expected tightness in his hips

– Gets caught peeking into the backfield too often, leading him to getting beat

– Fairly older than a typical prospect

– Not a ton of production

– Played free safety in 2011 before switching to cornerback

– Spent 2010 at a JUCO, Cerritos College, recording 37 tackles and 7 interceptions

– Is a father with one daughter

When we talk about cornerbacks as tall as McGill, two aspects first come to mind.

1. Ability to stay low in his pedal and consequently, having fluid hips and being able to turn and run

2. Having enough speed to play the position

To that first point, I was pleasantly surprised of how well McGill did. He does show some tightness, we’ll touch on that later, but overall, he’s very fluid for his size. Heck of an athlete, too. Ran a 4.51 at Indy and jumped 39 inches in the vert. With his height and arm length, that translates to covering a lot of space.

Even though the receiver wins inside on the route, I liked McGill’s change of direction and reacting off the initial outside step. That’s just a route that is difficult to stop. Plus, can’t let the receiver win outside with a single high shell and the safety playing shallow. Funnel him inside. Don’t blame McGill at all.

He’s at the bottom of the screen, wearing #1 for the Utes.

Turns and runs well in man coverage against this fly route.

Shot of McGill showing the ability to stay low in his backpedal. Can pop up but it’s clear he’s making every effort to keep his butt down. 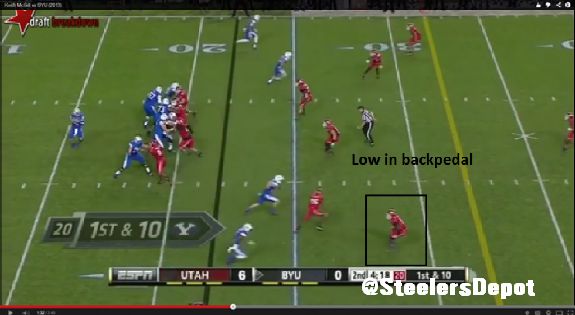 Obviously, love his length. Able to make a play on some passes other cornerbacks just aren’t able to do. It’s a huge plus and undoubtedly why draftniks are intrigued.

Uses his size to his advantage in coverage and embraces being physical.

Capitalized on his lone interception of the year though it was a poorly thrown pass by UCLA’s Brett Hundley. Thrown across his body and a fairly easy play by McGill.

Getting back to the second point of the original two examined aspects, I do have to question his speed. Susceptible to getting beat. Compounds the speed issue by gambling and peeking in the backfield. Dubious combination.

Cover Zero on 4th and 10. Absolutely no reason to be staring down the quarterback. Does anyway and gives up this touchdown on a flag route.

Happened earlier in the game against Colorado. Had the pass not been slightly overthrown, would’ve allowed another TD.

For a player that flashes aggressiveness in coverage, he can be timid after the catch. Doesn’t drive downhill and attack the receiver on this curl. Allows the receiver to turn and run while picking up the first down.

Doesn’t carry over the physicality he shows in coverage to the run game and when asked to tackle. Goes too high and much shyer than you’d hope or expect from a player of his statue.

May be a little difficult to tell in this screenshot but get a glimpse of some of the stiffness McGill has. Shows up most notably when he has to be quick-twitch against a ballcarrier. Struggles to flip his hips. Doesn’t end up missing the tackle in the shot below but that was thanks to the receiver going down far too easily than anything the cornerback did. 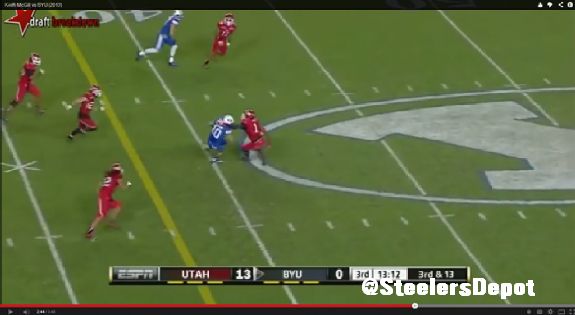 Needless to say, there are some large medical questions that were investigated at the Combine. Difficult to pinpoint the exact nature of the injury but it clearly was major if it sidelined him for half of 2011 and all of 2012.

Because of the injury, he’s one of the older prospects. Prospects like Stephon Tuitt recently turned 21. McGill is 25. For a player that is raw and hasn’t seen the field too much, it’s another negative. By the time he fully develops, he’ll be in his late twenties.

If it were up to me, I’d move him back to free safety. Position he originally played so there’s a comfort level associated with it. Because of his lack of speed but length and desire to read and react to the quarterback, free safety is an ideal fit. Will also help mask the tackling and contact issues he’s shown.

He’ll appeal to some teams but for the Steelers fresh off signing Mike Mitchell, McGill doesn’t make a lot of sense.

Games Watched: at BYU, vs UCLA, vs USC, vs Arizona St, vs Colorado