Breakdown of a wide receiver that has recently drawn buzz among the Steelers’ draftnik community. Nebraska’s Quincy Enunwa.

– Shows soft hands and plucks ball away from his body, increasing catch radius

– Tough and willing to take a hit to make a catch

– Capable of getting separation on underneath routes, not very stiff and shows quick feet

– Leaper who can high point the football

– Size can make it difficult for him to be brought down, can bounce off hits from DBs

– Versatile, played outside and in the slot

– Will lose focus and drop some easy passes

– Questionable deep speed, 4.45 player might not be showing up on tape

– Not very elusive after the catch, won’t make many miss

– Won’t always play up to ability

– Only one season of top production and even then, numbers weren’t monstrous

Although inconsistent and at times, frustrating, Enunwa displays impressive body control and can adjust to poorly thrown passes. Which comes in handy when you’re playing with three different starting quarterbacks in one season as he did in 2013.

In both of the above clips, he’s adjusting to a poorly placed ball. Out route that is thrown behind and a throw he has to scoop off the ground.

Big frame lets him absorb blows from safety. Tough, doesn’t show alligator arms, and competes for the ball, even in traffic.

Screenshot of one grab he made in between defenders. 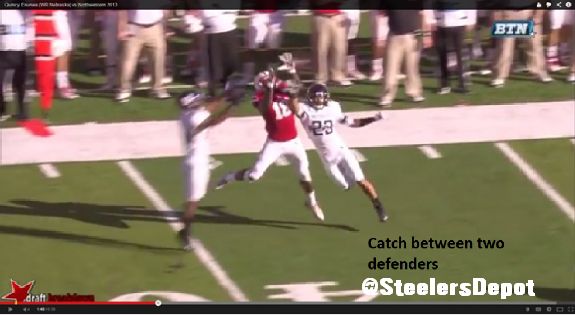 Shows a good vertical and will high point the ball. Didn’t ultimately make this catch but that wasn’t for a lack of effort. 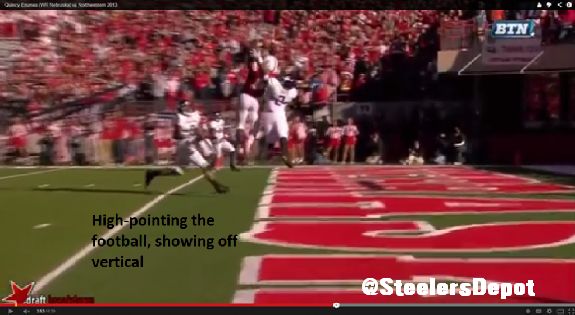 What will endear him most to Steelers’ fans though is his blocking. Talking Hines Ward level of blocking. It’s basically a prerequisite for any receiver on a team that has run the ball nearly 1250 times the last two years.

Just search “Quincy Enunwa hit” and play the first three clips. The first comes from his sophomore year, laying out a Fresno State defensive back on an interception return. Forces a fumble and Nebraska gets the ball back. The second is smacking UCLA Datone Jones, a player with a good 60 pounds on the wide receiver. The final is a crackback block on a Washington safety, laying him out and shaking him up.

All things considered, he had an impressive senior campaign. Played with three different quarterbacks who attempted at least 100 passes in 2013. All three started at least one game. Made the best of a sub-par situation.

Even though he does have soft hands, he’ll frustrate you by dropping too many easy passes. Tends to lose focus and may be thinking more about getting upfield than securing the catch. A lot of his drops occurred on third down, making them even more painful.

Don’t see any defining explosiveness from him after the catch. Didn’t make many miss in the open field. Only times defenders bounced off of him were due to Enunwa’s size rather than elusiveness.

Still, it’s hard not to like him. Really fits in well to the Steelers’ mold. Even as a rookie, his blocking ability and approach to that aspect will be infectious. It’s unlikely he’ll ever be a deep threat, #1 type of receiver, but his ceiling could be as a “Z” who will serve as a great blocker and reliable receiver.

Games Watched: vs Illinois, vs Northwestern, at Michigan, at Penn St, vs Georgia (Bowl)