Breakdown of one of the top prospects at cornerback in the 2014 class. Justin Gilbert from Oklahoma St.

– Length and strength to press at the line (33 1/8 arms, tied second longest at the Combine)

– Quality speed and capable of playing on an island

– Quick feet and change of direction

– Loads of lower body strength, gives him explosion to close on the ball

– When low in his pedal, shows fluidity in his hips and can turn and run with relative ease

– Forceful tackler, plays to his frame

– Takes good angles to the ball

– Return value and played in multiple facets on special teams

– Too tall in his backpedal and stiff trying to transition

– Not always a fundamentally sound tackler

– Career average of 26.3 yards per return

– Missed one game freshman year due to undisclosed injury

– Ejected in 2013 against West Virginia after throwing a punch, sat out first half of the following game

– Played quarterback and cornerback in high school, Top 60 prospect in Texas by Rivals

– Cousin accomplished wide receiver at Houston in the early 90s

There’s a ton to like about Gilbert’s game with little flaws.

As I started with in previous articles, let’s lay out what a Steelers’ cornerback must be able to do beyond their coverage skills.

1. Must be willing to support the run

2. Must be a reliable tackler

Gilbert checks all the boxes. What I love most about him is his desire to seek contact. Most cornerbacks shy away or only show it when they must – a ballcarrier in the open field, blindsiding a quarterback on a blitz. For Gilbert, he’ll go out and find it.

I know it doesn’t seem like much, and Gilbert probably didn’t even get credited with a tackle, but the above play shows his mentality. Lots of cornerbacks will spectate with multiple defenders already en route. Gilbert comes in late and helps clean it up. Plays like that shows separation between cornerbacks who have that physical, aggressive mindset and those that don’t.

He has a penchant for big hits too, body slamming the tiny Jalen Saunders here.

Does a number on TCU quarterback Trevone Boykin here.

Gilbert compliments that with his coverage. Love his size. Tons of bulk and lower body strength. Big asset when closing on the ball.

Notice how Gilbert didn’t need to use a “T” break and “click” his heels. Has the leg strength to plant and just drive off that back foot. Not all guys can do that and every fraction of a second saved can mean the difference between a reception and a breakup.

Shows good ball skills as his interception numbers indicate. One remarkable pick against Mississippi St (though I’d argue the pass was incomplete but the ruling upheld it).

Threat with the ball in his hands. Career average of 15 yards per interception return, scoring twice. That danger stems from his extensive work on kick returns, serving as the Cowboys’ starting returner all four years. 102 returns so he certainly doesn’t lack experience. Open field isn’t foreign to him.

Adds a tremendous amount of value to him, especially early in his career as he works his way into a lineup. Like Odell Beckham Jr, a first round pick who can step in as the team’s starting return man from Day One.

Biggest complaint with Gilbert is common among tall cornerbacks. There are times where Gilbert can get low in his pedal and he doesn’t show much tightness in his hips, but there are moments where he’s too tall off the snap. Gets him into trouble.

Tough to get a real good look in the still shot below but you can see him too upright. 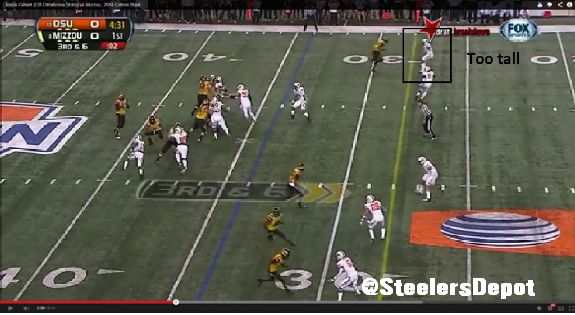 Get a better look at it in the GIF below. Way too high in his pedal. When the receiver stems to the post, Gilbert has trouble flipping his hips and is beat badly.

Same play with a photo of how tall Gilbert was off the snap. 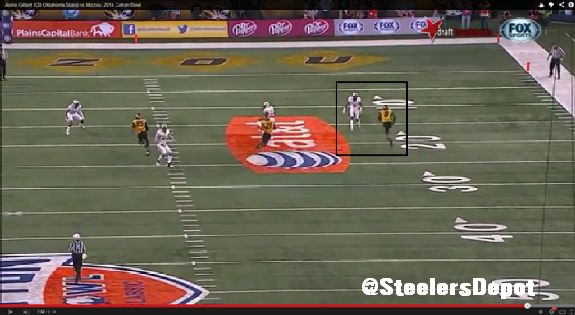 Some other issues he has are minor and not something I saw in every game. Technical work I mentioned in my report. Problems like sometimes punching with the wrong arm (should be opposite of the way you open your hips) that can cause his hips to get locked up.

Did drop the occasional potential interception but as the adage goes, it’s why he’s a corner. Some were costly though. Dropped one against Oklahoma with 44 seconds left in the game and the Cowboys leading by four. Sooners ended up winning.

All minor qualms when looking at the big picture. Although he doesn’t tend to get lumped into this category, he’s one of the most versatile players in the draft. Played a mix of every coverage at Oklahoma St. From press man to off coverage and protecting the deep third, he excelled in every situation. Even as a senior, saw time as a gunner and played on the field goal unit. Mentioned his success as a return man.

Again, versatility is a huge asset to any team. The more hats you wear, the quicker you’ll get a helmet.

I’ll preach it every day my opposition to the team taking a cornerback within the first two rounds. How there isn’t the precedent for it. But it’s painfully obvious the team is taking a hard look at a cornerback in round one. If the team is steadfast in choosing that position, Gilbert is my choice.

Games Watched: at Mississippi St, vs TCU, at Texas Tech, vs Oklahoma, vs Missouri (Bowl)