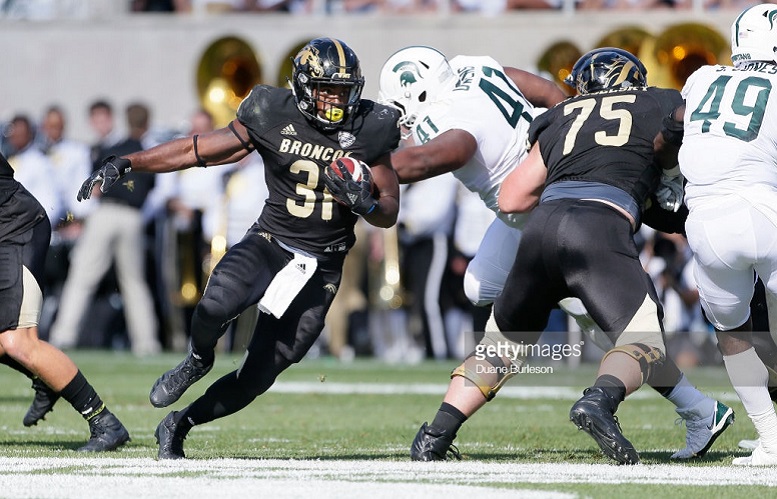 Lined up beside his QB in the shotgun formation, Franklin flips over to the right just before the snap of the ball. This flip and initial patience allows his blockers the time to seal off the running lane as he explodes into the flats. With everyone up front putting a hat on a hat, the runner shows some open field burst in the open and races for a first down. This play shows how well the back can read blockers and wreck some havoc downfield.

Beside his signal caller again in the shotgun, #31 takes the handoff and runs straight up the belly of the beast. The back runs through blockers and defenders alike, pinballing his way to a spinning first down. On this play you can see that Franklin has good pad level, but would rather run through someone than away from contact, While this is good play in the MAC, it could be a mistake against the bigger faster NFL competition.
‘

On a 3rd and two, the runner once again beside his quarterback in shotgun cannot find a crease. He dances and tries to spin away from the incoming dfenders who swallow him up. #31 gets stopped in his tracks because he doesn’t get low or make a quick decision. Franklin needs to take what the defense gives him and not give away his center of gravity, especially in short yardage situations.

In a pass heavy formation on a 3rd and three, Franklin screams out into a wheel route where he runs past the safety in coverage. #31 does a good job tracking the ball to run underneath it, takes a big shot to the helmet, and makes the catch while spinning away from contact. The back sprints down the sidelines, using a stiff-arm, and keeps good balance. The play did not end in the touchdown as shown, but it did demonstrate how Franklin plays in the open.

Franklin is an intriguing runner at the next level. He is bigger than most, but also doesn’t have the quicks that most NFL capable backs have. I see him as more of a two down thumper, perhaps goal line specialist. The way the Steelers are comprised today, his role would be quite limited. If Bell is re-signed, there is probably not room for Franklin; however if Bell is dealt or no longer in Pittsburgh’s long-term plans, then I could see a seventh round investment in the Western Michigan Bronco.