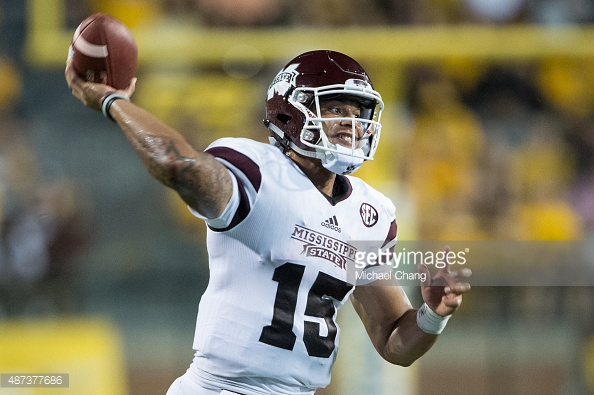 – Very cool facing the blitz and under pressure
– Throws designed rollouts to his left extremely well. Re-sets hips outside pocket every time, very fundamental player
– Hitches really effectively
– Excellent ability to extend plays
– Shuffles in the pocket effectively, creates space for himself
– Tremendously strong hands, has shrugged off strip sack attempts
– Left hashes to right numbers 20 yards on the dot – great velocity
– Have seen some excellent throws but only flashes touch – perfect throws are there but inconsistent
– Goes through progressions effectively to checkdown
– Makes his own line calls, uses hard count to diagnose blitzers
– Extremely good at recognizing defensive alignment and finding the route to take advantage of it

– Tendency to sidearm some passes and puts far too much air on those
– Release can be slow at times
– Feet a little far spread as a base, loses some power because of it
– Fails to bring his eyes back up when flushed, moves to scramble. Doesn’t sense edge pressure
– Footwork doesn’t always look natural, feet are a little mellow at times
– Needs to run with vision a little higher
– Placement tends to be a little high over the middle/short. Completely turns RB around high and behind on 4th down flat route, incomplete pass
– Inconsistent – seems to throw more accurately outside pocket. Needs to throw receivers through pylon
– Tendency to lay seam routes out for the safety

Prescott doesn’t always go through his progressions correctly, but when he does, it’s NFL-caliber. You can easily see in his head how quickly he reads the defense from left to right. When he does see his weakside curl come open, he’s decisive and throws the ball quickly. It’s high where only the receiver can get it, top-notch placement. Although this may not look like much, this is exactly what NFL quarterbacks are asked to do with consistency day-in and day-out.

In the pre-draft process, you’ll hear a lot of analysts talk about a quarterback’s “anticipation.” I prefer to call it manipulation. That is to say, can he not only be aware of receivers coming open, but also direct the flow of traffic to ensure they do?

Prescott knows he has Cover 1 based on the single-high safety and the inside leverage from the corner, who’s going to jam the weakside receiver De’Runnya Wilson toward the sideline. Immediately, Prescott turns his head to his right, appearing to read the trips route concept. Before he hits that final step on his drop though, his head is turned and he knows where he’s going with the ball. A slight hitch and then a beautiful touch pass from Prescott mean the safety has absolutely no chance of getting to this.

For a guy often knocked as a boundary-pass hurry-up spread offense QB, Prescott is willing to take some shots in the pocket to deliver the ball over the middle. Here, he has 5 blitzers coming against a 5-man protection, so he knows he has to find something quickly. He comes off the weakside route to find the stick route in the middle of the field. He gets belted as he throws the ball, but it’s well-placed away from the defender.

Prescott may be a QB, but he runs like a fullback. This is 4th and 5, which is probably on the outer limits of a playcaller’s comfort with running the ball (which makes me wonder if Prescott audibled after seeing 4 in the box). It’s a simple QB Inside Zone. Prescott lowers his head and drives for the first down. This is all even counting the fact that his RG didn’t disengage in time, which (if properly blocked) would have meant more yardage. At 6-2 and 230 lbs, Prescott is built to take punishment and dish out some of his own too.

One area where Prescott really stands out is his mechanics outside the pocket. He’s smart enough to realize that any roll-out means you run through it and don’t stop, so his feet are moving the whole time while his eyes scan the back of the end zone. Notice those hips come around when he identifies a target. It’s conscious fundamentals. He knows he has to get the hips around for a better throwing motion, and when he flips them, his throw is perfect.

Where Prescott struggles at times are his inconsistencies. This slant throw sees him stare the receiver down, move with some lazy footwork and place the ball well behind Wilson. This? This is when Prescott looks bad. I think that the preponderance of evidence is that these are the aberrations, not the trend, but some will nitpick them to death.

I will admit it. Coming into this season, I was one of those people who made jokes that Dak Prescott was bound for a career as an NFL fullback or tight end. His 2014 season featured a low completion percentage of 61.6%, 11 interceptions and almost 1,000 yards rushing. That seems like pretty typical numbers for a college QB who wouldn’t necessarily have a future on Sundays.

His 2015 season was a different story altogether.

Prescott was asked to throw far more often, and he made it look pretty. He didn’t push the ball quite as much, dropping almost a yard in Y/A, but improved his completions to 66.2% and dropped his interceptions to just 5 on the year. Prescott almost always gets the call on 3rd or 4th and short. When in doubt, the secret to playcalling is “Put the ball in the hands of your playmakers,” and Dan Mullen has done just that with Prescott.

If you’re an NFL team, and you want to take advantage of two-point conversions considering the extra point has become more difficult, Prescott is your man. He is nigh unstoppable downhill, and woe betide any linebackers or defensive backs trying to stop him. He sees field extremely well on designed runs, barrels through defenders like a fullback, and craves contact. All in all, surprising burst and speed for a QB. Another bonus is his forward lean, meaning he often gains an extra yard. His placement is adequate, but his field-reading abilities are what would set him apart in the red zone. He would be a tremendous designated two-point specialist in a league where that role is growing on the collective coaching radar.

However, let’s not sell ourselves short here. Dak Prescott has an NFL future, and it is at quarterback. His upside and durability are tremendous, and while he lacks the right touch throwing the ball as of now to succeed, that is easily learned. He also needs a lot of work on his footwork to make it more natural, but it’s far harder to teach the eye discipline Prescott already has on the majority of his plays. I think he will be a Day 2 selection, and I would not be surprised to see a guy with his work ethic develop and bloom into a starting quarterback in this league.