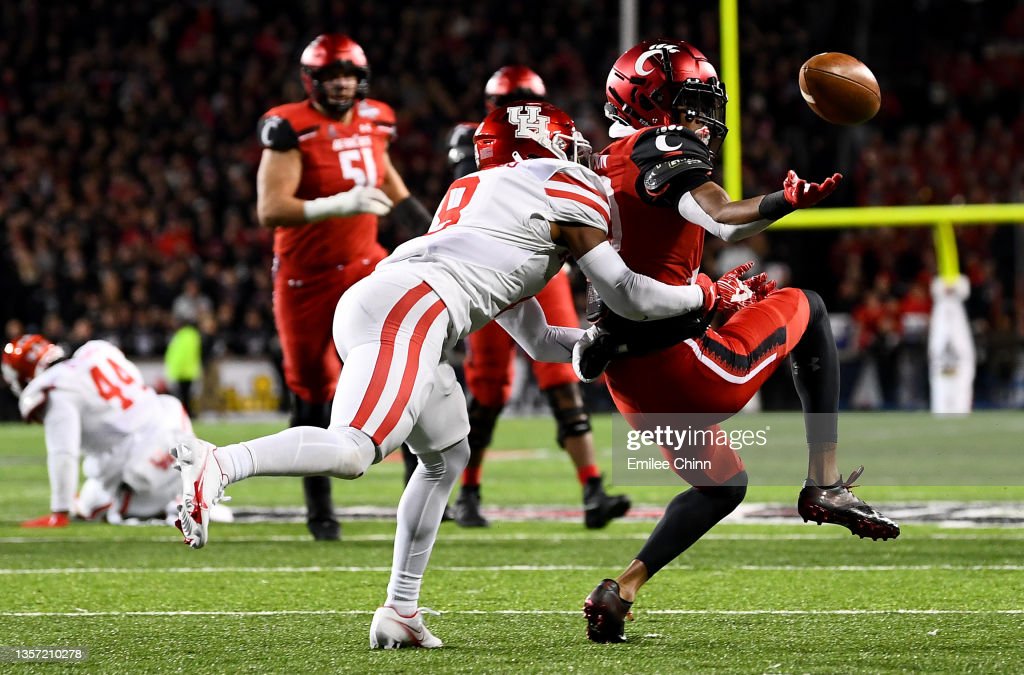 From now until the 2022 NFL Draft takes place, we hope to scout and create profiles for as many prospects as possible, examining their strengths, weaknesses, and what they can bring to an NFL franchise. These players could be potential top 10 picks, all the way down to Day 3 selections and priority undrafted free agents. Today, I’ll be profiling a cornerback prospect that dominated the Group of 5 level as a defensive back as well as a deadly return man that could be an immediate answer to a position of need for Pittsburgh.

— Has experience lining up outside on the perimeter, in the slot at nickel, as well as overtop in a free safety look in two-high
— Was tasked with playing press man, off man, and various zone coverage looks during his college career
— Has the explosiveness to leap into the air to challenge jump balls to bigger receivers
— Has the speed and quickness the run with receivers vertically as well as across the field in coverage
— Twitchy athlete that can flip his hips smoothly in coverage and operate well in a backpedal
— Play recognition and situational awareness allow him to react to passes thrown underneath, being able to click-and-close on receivers to impact the catch point
— Does a good job sticking his arm in the hands of the intended target to force incompletions
— Can quickly change directions when tasked with man coverage to stay on a receiver’s back pocket in coverage
— Has covered the opposition’s top target in man coverage on numerous instances
— Dangerous when allowed to play in zone coverage and react to underneath passes, jumping passing lanes
— Has a nose for the football, possessing the hands and aggressive demeanor to intercept passes
— Willing to stick his face in the fan as a tackler, coming downhill and driving on the ball to cut down ballcarriers
— Dynamic returner that has a real feel with the ball in his hands in open space having nine return TDs on his resume
— Accelerates quickly in the open field with the ball in his hands, having the vision to locate kickback lanes and evade the opposition
— Multi-faceted weapon that has experience lining up at WR as well as toting the rock as a runner
— Has sure hands as a receiver as well as a defender when the ball comes his way

— Likes to get grabby down the field, likely leading to more PI calls at the next level
— Can be a willing tackler, but needs to be more consistent at running through ballcarriers rather than throwing himself at their legs
— Can struggle with larger receivers when playing on the outside who body him up and take the ball off his head above the rim
— Lack of size and play strength lead to him struggling at shedding blocks on the outside against the run/screen passes
— Occasionally will allow inside separation in off coverage, leading to easy completions over the middle if he doesn’t recover quick enough
— Older prospect that will turn 24 years old during his rookie season

Marcus Jones took the long road to stardom to set himself up as an All-American and NFL Draft prospect. A talented defensive back and return specialist in high school, Jones initially committed to Troy University where he saw the field immediately as a true freshman, making a profound impact as a cornerback and a return specialist for the Trojans. He ended up deciding to transfer to Houston to better his prospects at playing at the next level, forcing him to sit out the entire 2019 season. When he was allowed to play in 2020 for the Cougars, he immediately flashed his ability to blanket opposing receivers in the AAC like we see on this series of clips against Memphis and WR Calvin Austin.

Jones will get knocked for his lack of size, which does show up on tape on occasion when battling opposing receivers down the field. He is only listed at 5’8, 185lb, and doesn’t have the ideal length to consistently contest jump balls down the sideline and in the end zone to bigger targets. Take, for example, this play against SMU where Jones aligns at the bottom of your screen in man coverage and does a good job carrying #5 Danny Gray up the sideline but loses his footing and falls to the ground as he attempts to contest the jump ball that Gray hauls in for the big gain into Cougar territory.

Still, despite Jones being of smaller stature, his demeanor and play style make you think he’s bigger than he is listed. He is a feisty competitor at the catch point and does a great job playing through the receiver’s hands when in coverage. Check out this intercepted pass against Memphis where Jones lines up in press man coverage on the right side of the formation and runs with his man across the field in tight coverage. The QB puts the ball up into the air where Jones can elevate up over the intended target’s head and snag the ball with one arm, bringing it in with the other to secure the turnover while showing off his leaping ability.

While being the size of a prototypical nickel corner that strictly plays inside, Jones lined up all over the place for the Cougar defense, playing outside cornerback, nickel, and even as a split zone safety on occasion. He is aggressive at the LOS, looking to get hands-on with receivers while having the ability to hang with them in coverage across the field like we see on this rep against the Tigers. Jones initially allows an inside release to the receiver at the bottom of your screen but does a great job using his recovery speed to close space and leaps at the last second as the ball is thrown to the receiver to knock the pass away as Jones plays through the intended target’s hands.

Jones can also be dangerous when allowed to play off the ball where he can read and react to underneath passes. Here against the Mustangs, Jones is playing off-man coverage and reacts to the pass being thrown to his man, breaking on the ball and manages to stick his arm in there as the ball arrives.

Here against Tulsa, we see another example of Jones’s ability to click-and-close on the football with his instinctual awareness, breaking on the route in the flat and nearly picking it off for a house call the other way. He reads the QB’s eyes and recognizes where the pass is going before jumping the route for the near INT.

Jones profiles to be an opportunistic defensive back at the next level, especially when utilized in zone coverages and when allowed to make plays on the football in his vicinity. Here against SMU, Jones lines up off the ball in a cover 3 look where he comes down, having responsibility of the underneath pass. He sits and waits for the passer to throw the ball over the middle, jumping right in front of the pass for the INT for the clutch turnover in the fourth quarter.

Now Jones’s size not only impacts his ability to consistently challenge bigger receivers at the catch point, but also his ability to hold his own downhill against the run. He can be a willing run defender, but his lack of size and stopping power leads to him struggling to get off blocks and consistently get ballcarriers on the ground. Take, for example, this play where Jones runs into the ballcarrier, but the runner shrugs him off as he breaks to the middle of the field, getting to the left sideline as he accelerates toward the end zone. To Jones’s credit, he manages to chase him down before scoring, showing good effort, but could have been averted if he brought down the runner the first time.

As I mentioned earlier, though, Marcus Jones shouldn’t be categorized as an unwilling tackler. He has no issue throwing his body into the fray, coming down to cut down runners and receivers on screen passes alike. Check out this stop by Jones in the red zone where he comes down from the safety spot, closing space quickly after the ball is snapped and goes low through the ballcarrier’s legs to prevent him from falling forward.

As impressive as some of Jones’s plays at defensive back may be, he is even more dynamic as a return specialist. The redshirt senior has nine total return TDs to his credit in college, including four this past season which earned him the Paul Hornung Award and to be named a consensus All-American. None of the returns were probably more important than this one at the end of the SMU game which sealed the victory for Houston in the final seconds, sending the whole stadium into pandemonium. Jones has the open field speed, acceleration, and quickness to evade those trying to chase him down, making him a legit threat to take any kick or punt he touches to the house.

When coming up of a pro comparison for Marcus Jones, I heard the name Terrence McGee brought up as a fellow defensive back that starred for the Buffalo Bills back in the early 2000s as a talented cornerback and return man. McGee too was considered undersized (5’9, 205lb), yet was a feisty competitor on defense that also excelled at taking the ball away (17 career INTs) as well as earned All-Pro honors twice as a kick returner, scoring seven total TDs on kickoff and interception returns during his career.

McGee was drafted in the fourth round of the 2003 NFL Draft, and I can see Jones going in a similar spot this April as teams may knock him for his lack of size and prototypical length to play on the outside at the next level. He also will be 24 years old in October of the 2022 season, making him an older rookie. Still, his versatile skill set, having played all over the secondary in college should be appealing for defenses as a likely great fit at nickel along with some occasional work overtop should he prove he cannot play on the perimeter.

Combine that with his competitiveness to challenge receivers while staying sticky in coverage and having the traits to be a ballhawk, Jones should be a sought-after commodity for all that he provides a team outside of his dynamic return ability and the little he has shown as a receiver on occasion at Houston. Pittsburgh is still looking for a suitable replacement for Mike Hilton at the nickel after signing with Cincinnati, and given Jones’s play style, ability to take the football away, and also what he could provide Danny Smith on special teams, Jones should be a player high on the Steelers’ radar come the 2022 NFL Draft as a great value selection in the middle rounds.