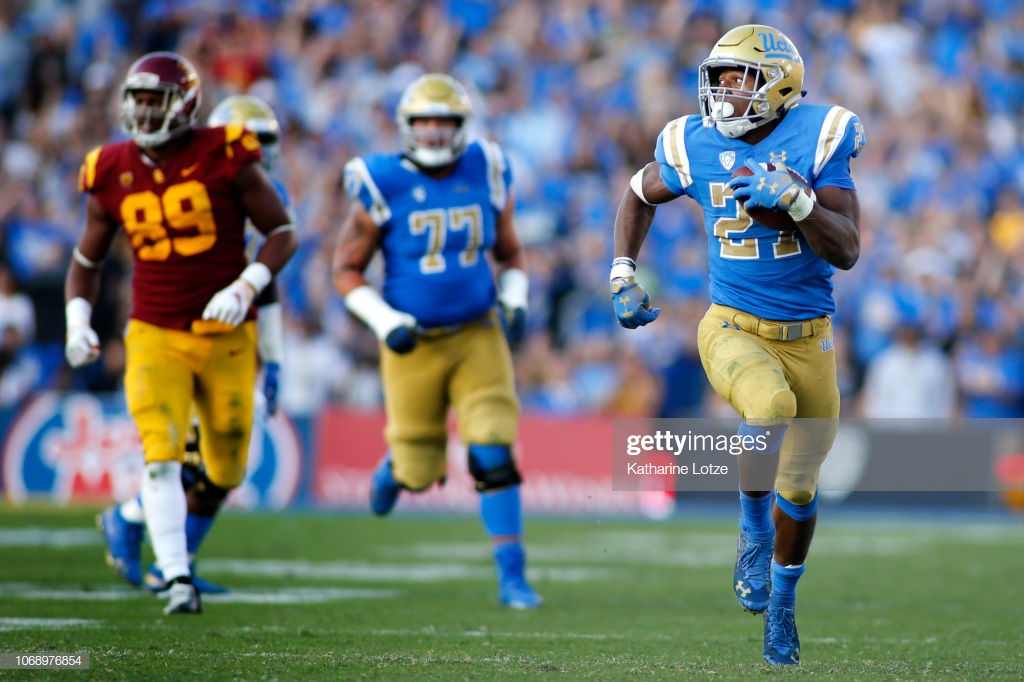 – Big frame with broad shoulders and thick lower half
– Defined run style, knows the type of back he is, routinely gets downhill and runs in a line
– Good vision, able to press the hole and set up first and second level defenders, finds the bubble and attacks it
– Gets shoulders square when he makes his decision to create power
– Shows explosiveness when making his initial cut and has more burst than you’d expect in space
– Runs through arm tackles, hard for DBs to go low and bring him down
– Willing pass protector and stays square in pass protection
– Didn’t catch many passes but flashes plus hands and ability to adjust to the ball away from his frame
– Works well in a downhill, power/man scheme
– Capable of being the workhorse, lead back and “the guy” to win games
– Shows good ball security, isn’t loose with his carriage of the football
– Minor kick return value

– Average athlete who lacks long speed to run away from defenders in the third level, will get tracked down by DBs downfield
– Takes too many steps to gather self in changing directions once up to speed, needs time to decelerate, and won’t work as well in a zone scheme, despite having plus vision
– Will run a bit too tall because of his height and saps him of power, needs to improve pad level
– Capable of pushing the pile forward but not overwhelmingly powerful who can throw defenders off of him
– Will outrun his blocks on trap blocks, needs to show consistent patience letting them get set up
– Didn’t catch many passes, small sample size in evaluating his hands

That doesn’t carry quite the same ring as “Benny Snell Football” but on tape, the two guys are pretty similar. Similar sizes and running styles. Kelley is a downhill runner who doesn’t have much wiggle, a little bit of burst but far from amazing, but also better hands than expected for a guy who didn’t catch the rock much in college.

Here’s a look at his downhill run style. I just like how he makes his cut, gets his shoulders square, and gets vertical. Very much a North/South runner. As we saw in Snell, he knows what type of back he is and makes no bones about it.

And like I said, his hands aren’t bad. Check out this adjustment and grab away from his body against Washington State.

But he works best, and probably only works, in a power, downhill run scheme. Takes too many steps to gather himself and change directions. His vision is strong, he sets up the hole well, but doesn’t have the lateral quickness to change directions.

In backstory, there are similarities to Snell as well. Salt of the Earth type of player. Snell was overlooked by all the big Ohio schools, a three star recruit who committed to Kentucky. Kelley was a two-star prospect in California, had almost no interest coming out – UC Davis appears to be his only option – before transferring and walking onto the Bruins’ campus. So good for him for being able to make his own path.

I feel similarly about Kelley as I did Snell. A decent prospect, I see the value, but not someone I was super excited over. I was focused more on the likelihood they were going to draft Snell, not that I was banging the table for him.

In a tough running back class, it’s going to be hard for Kelley to find a path but much like his college days, maybe he proves doubters wrong again. Having an impressive Combine workout would help but I’m not holding my breath.