– Fluid and a strong athlete for his frame

– Long strider who covers a lot of ground

-Good body control and adjusts to flight of the ball well

– Size makes it difficult for him to press at the line

– Made the few targets he saw count

– Length an asset as a run blocker

– Will lose some speed in his cuts

– Won’t make many miss in the open field

– Difficult to evaluate and project

– Left school as a junior

– Averaged whopping 22.1 yards per catch over his career, first in Clemson history

Vertical threat with sneaky build-up speed. Primary routes he ran at Clemson. Reception of 30+ yards in six games in 2013 while averaging just under 20 yards per reception on the season. Despite just ten catches in 2012, racked up 305 yards and four touchdowns.

As those two examples show, sneaky speed who can stretch the field vertically. Numbers back that up, too. 17 of his 42 grabs, over 40%, went for 20+ yards. 33 receptions moved the sticks. No doubt he was productive when given the chance.

Arm length gives him the potential for a large catch radius and he does a good job of getting his arms extended to pluck the ball out of mid-air. Still photo of his catch in the first GIF. 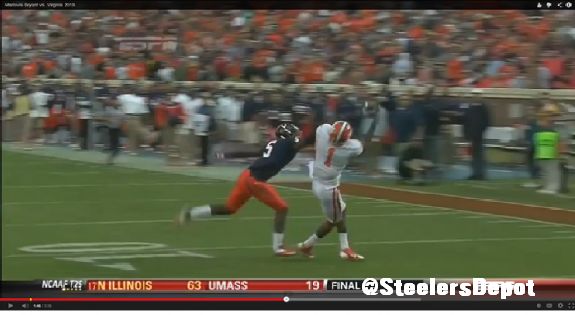 Another game with him high-pointing the football down the sideline. No alligator arms with the safety closing, who ended up blasting Bryant. Holds onto the pass. 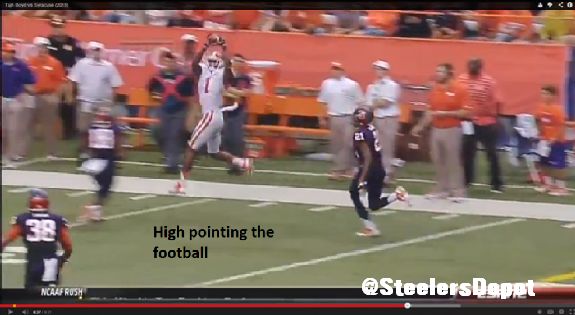 Love the hands and concentration on this field. Juggled and caught for six. Excellent body control, something he showed in multiple games. Tracks the ball well.

And shows surprising fluidity. Little tight in the hips but certainly not stiff. Shows the ability to get in and out of his cuts on this post corner.

Will have some ugly drops and frustrate you. Jumps for passes he doesn’t need to. Let three slip out of his hands in Week One against Georgia.

Like I wrote, Bryant is a difficult player for me to project. Tough enough to watch wide receivers without the All-22 tape but got such a limited look at him. Why I ended up watching seven games, the most of any player this season. Only then did I become comfortable evaluating him.

Only three career games with more than four receptions. All coming in 2013.

Limited route tree and mostly ran deep routes. Wasn’t asked to do much else. One trick pony.

Because of that, he’s hard to project. Even though it isn’t in an option offense, Bryant reminds me a lot of Georgia Tech’s Stephen Hill. Extremely raw and will take time to develop to become a complete threat.

Steelers’ fans, or any team that drafts Bryant for that matter, can’t expect him to contribute right away. Just way too green. Potential is there and a lot to like but due to his rawness and the nature of the position, he’ll have to sit and learn.

Games Watched: vs Georgia, at Syracuse, vs Boston College, vs Florida St, at Maryland, at Virginia (Half), vs Ohio St (Bowl)