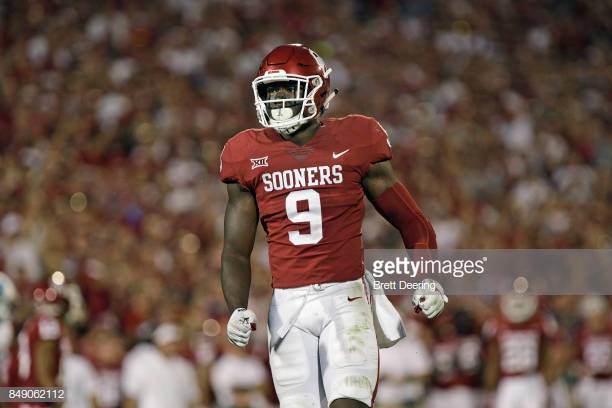 -Quick-twitch athlete with insane range for the position
-Processes quickly and flies downhill in a hurry
-Consistently around the football and is a sound tackler
-Long, well-proportioned frame with a large tackle radius
-Terrific motor for the position that runs hot always
-Flashed pass-rushing abilities aside from blitzing

-Actively tries to avoid contact from blockers; won’t shock and shed near the line of scrimmage
-Slow to flow laterally at times and allows blockers to climb to second level and get inside his pads far too often
-Lack of splash plays on the football is a major concern; just three forced turnovers in his career (two fumble recoveries, one forced fumble)
-Limited feel and awareness dropping into space in coverage; may be just a 2-down linebacker early in his career until he develops coverage aspect of his game

Over the last three years in college football, there hasn’t been a more productive player on defense, at least in Power 5 conferences, than Oklahoma’s Kenneth Murray.

The junior, who declared early for the 2020 NFL Draft, is a tackling machine for the Sooners in Alex Grinch’s fast, physical defense.

Standing 6’2, Murray absolutely looks the part of an NFL linebacker in today’s day and age, and he packs the speed and athleticism to thrive in the NFL.

When it comes to sideline-to-sideline range, there’s none better in this class than Murray.

Murray really put a stamp on just how special his 2019 season was going to be with a dominant performance against Houston. Murray was assigned to “spy” Houston’s Heisman hopeful quarter De’Eriq King, who is one of the fastest quarterbacks in college football.

That didn’t faze Murray when it came to his sideline-to-sideline range.

What a play by Murray. Few linebackers can make that play in the NFL, let alone college. Murray is one of them.

Seriously though, he made a habit of it.

Later on in the 2019 season, Murray pulled off the same play, this time against Texas quarterback Sam Ehlinger, who has some wheels in his own right. Murray just makes it look so easy. His long strides and clear speed allows him to cover a ton of ground, especially in situations like this.

Occasionally on film, Murray shows the ability to process quickly, sift through the trash in front of him and provide a stick at the line of scrimmage. Unfortunately, it doesn’t occur enough for my liking when it comes to the linebacker position.

Here against Texas Tech in 2019, Murray reads his keys quickly, comes downhill with speed, stays square and provides a pop, keeping the running back short of the line to gain. The ability is definitely there with Murray. His linebacker coach at the next level will be tasked with getting it out of him consistently, because too often he’ll let blockers climb to him at the second level because he’s hesitant and doesn’t trust his eyes enough, leading to big runs.

He does a nice job here flowing originally, but you can then see the hesitancy as he’s unsure what he’s seeing in the mess. Once he figures it out and knows he’s not leaving a cutback lane, he’s not quick enough to get off of the block and make the stop, leading to a first down run.

While he doesn’t make many splash plays on the football, similar to current Pittsburgh Steeler Devin Bush coming out of Michigan, Murray can make an impact immediately in the NFL against the run and rushing the passer in certain situations.

Grinch moved Murray around quite a bit in passing situations, rushing him from all over the place. I was shocked to see this type of burst off the ball and the ability to run the arc and finish the way he did at the quarterback.

Final thoughts on Murray: right away he’ll make an impact as a key defender against the run and short, quick passing attacks. He’ll help combat some mobile quarterbacks at the next level as well with his freakish athleticism and insane sideline-to-sideline range.

He’s still super unrefined though in key aspects of the game, such as shocking and shedding in tight, and attacking downhill consistently against the run. Add in the coverage woes and the lack of plays on the football and there are obvious areas of concern. That said though, his athleticism, range, frame, and production should make him a lock for the first round. I expect him to go within the top 20. Oakland makes a ton of sense.