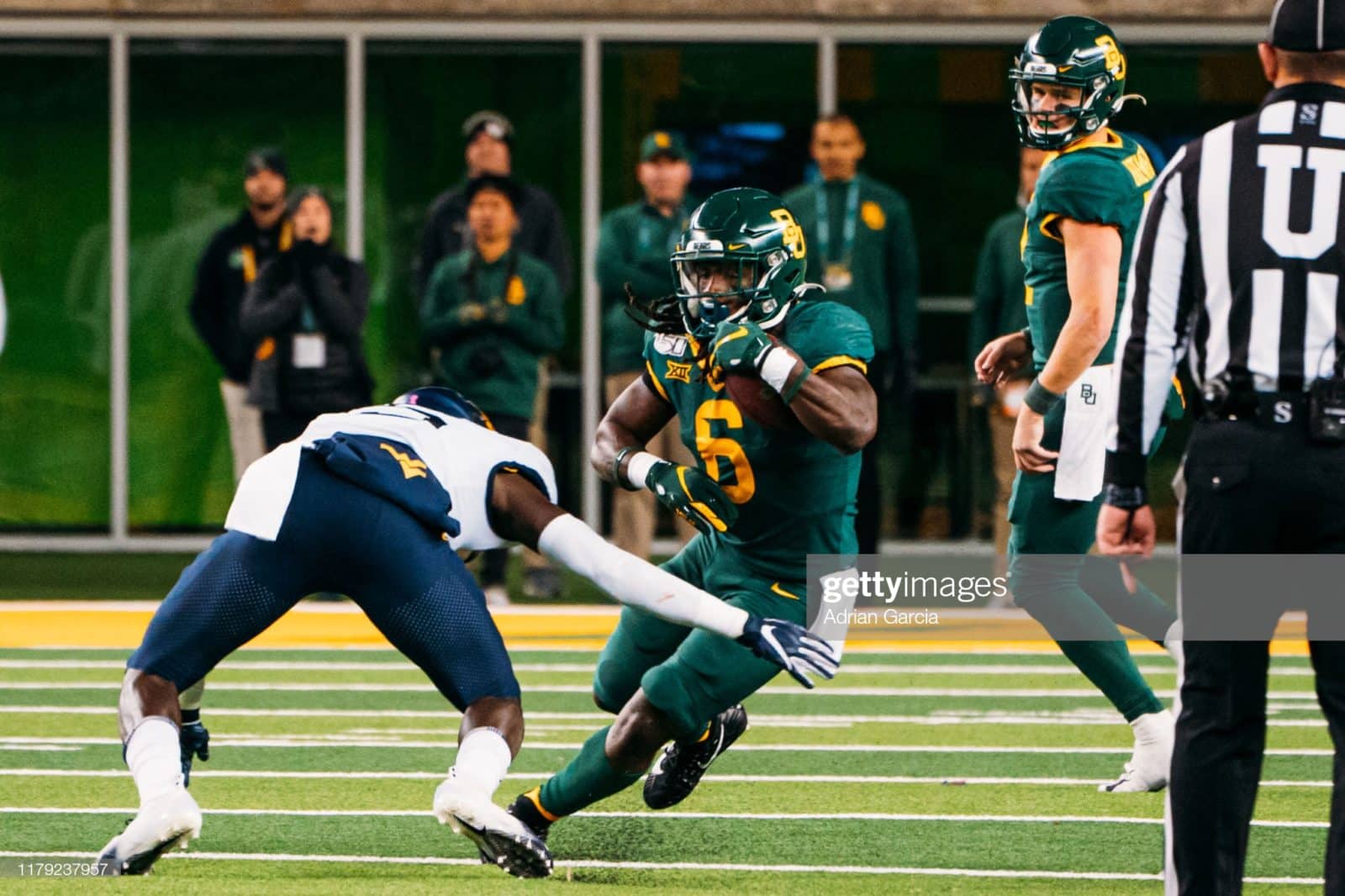 – Short but not necessarily small, fills out frame relatively well
– Tremendous burst and acceleration, sees and hits the hole with consistent ease
– Shows long speed and ability to run away from 2nd and 3rd level defenders, home run hitter
– Excellent lateral agility, able to stop/start well, and creates outside structure of run when play breaks down, able to get more than what’s blocked, good feet and change of direction ability
– Only needs a little bit of runway to produce an explosive play
– Shows contact balance and able to stay on his feet through low/arm tackles against DBs
– Fearless player who seeks out contact, plays bigger than size
– Willing lead blocker on option plays and tries to throw his weight around
– Asset as a receiver, good hands and catches outside his body, runs precise routes
– YAC threat post-catch, can win in space and make defenders look silly
– Doesn’t dance, gets downhill, focus on getting vertical and hitting the hole
– Appears to show good ball security

– Lacks power and goes down on contact against solid, square tackles, unable to fall forward and push the pile
– Needs to get head around quicker in routes as checkdown/safety valve, also needs to get out in routes quicker too when there isn’t a blitz coming
– Will occasionally misread LB leverage on option routes and go the wrong way
– Limited in pass protection, tries hard but lacks size/bulk and will be late to recognize blitzes
– Only marginal production and always worked in committee, was never “the guy” in his offense and got to play fresh because of it
– Limited KR/PR profile despite clear skillset for it

Hasty is just flat out a fun prospect to watch. He’s fast, explosive, twitchy, but with the rare trait of, knowing all that, not trying to be Bo Jackson in Tecmo Bowl. He gets downhill, doesn’t try to run around the field, reversing course, and making everyone miss.

But don’t get me wrong. He will make you miss one-on-one. Take a look.

Here’s a glimpse of his acceleration and home run ability. Hasty sees the hole, hits it, and goes 0-60 like a Ferrari.

I do love his toughness too. There’s a reason why he got picked to wear a single-digit jersey, a carryover from Matt Rhule’s days at Temple, handed out to the toughest players on the team. He’s short but not small, there’s definitely a difference, and is known for his weight room work ethic. Coach Rhule said Hasty squats 625 pounds and as a junior in high school, won the team’s award for best “Ironman performance,” which oh by the way, an event where he apparently ran a 4.32.

Check him out on this play. Lead blocker and throws himself into the defender to clear the path for his fellow RB, who takes this one the distance.

Hasty is a dude who invites contact and will throw a stiff arm your way, even if it doesn’t always connect. Runs like a big guy though his power is limited to that initial effort. Most guys tackling Hasty do outweigh him and eventually, physics kicks in and he goes down.

It’s a bit disappointing to see his return value was limited in college. His combination of speed, toughness, and big-play ability seem perfect to do kicks or punts. I’d love to find out why he wasn’t very involved there and his numbers look pretty poor, averaging only 20 yards a try at Baylor.

Is Hasty going to be an every down back? Probably not. He wasn’t in college and most guys don’t turn out to be Alvin Kamara, college backups/timeshares who jump into a full-time role in the NFL. But he’s a strong complimentary back who would fit well next to James Conner and/or Benny Snell in Pittsburgh. Hasty is similar to Kerrith Whyte Jr. but with more wiggle. In a deep RB class without a super impressive resume, he can fall, presenting good value, though the Steelers love their backs to have gaudy college stats. Hasty doesn’t so he might not be on their radar. He should be.