No concept today. Instead, we’ll break down individual technique of how to play cornerback – and what happens when it goes wrong.

Week Three against the Chicago Bears. Bears line up in 11 personnel with the Steelers in dime. You know it was early in the year with Shamarko Thomas and Robert Golden on the field defensively. 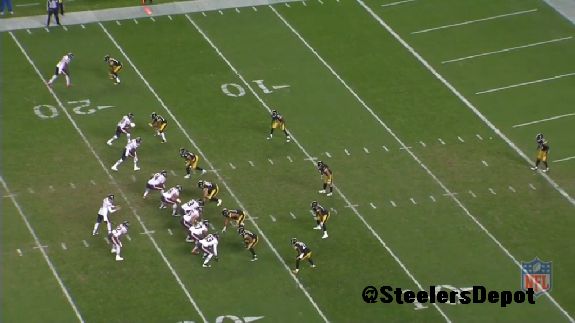 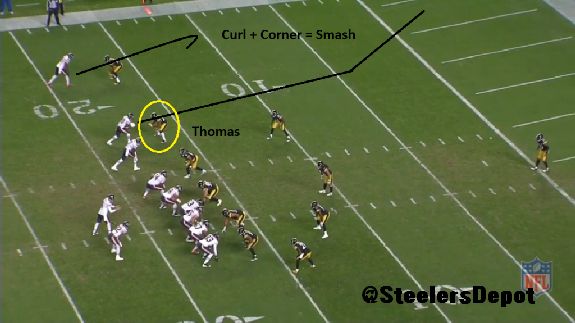 We won’t go into the concept today, but Bears run a smash route (curl + corner) and Jay Cutler hits Earl Bennett in the left corner of the end zone for six.

Issue here, and I pointed it out in that week’s game breakdown, is Thomas’ technique. Chiefly, with his initial punch. If you’re going to roll up on the receiver, you can’t get burned off the line. A corner’s punch is dictated by the stem (release) of the receiver. You have to avoid locking your hips. It’s why fluidity is such a talked about component of defensive backs each draft. It’s part natural talent, part technique.

Because if you punch with the same hand, your hips aren’t open and you’re not prepared to turn and run. It locks your hips and if the receiver runs through – likely since you’re not deriving any power from a locked base – you’re going to get beat.

That’s what occurs here. Thomas punches with his right hand as Bennett stems outside, the receiver easily runs through, and the defensive back is immediately put in trail position. With the single high look, there’s no safety to take away the corner route. 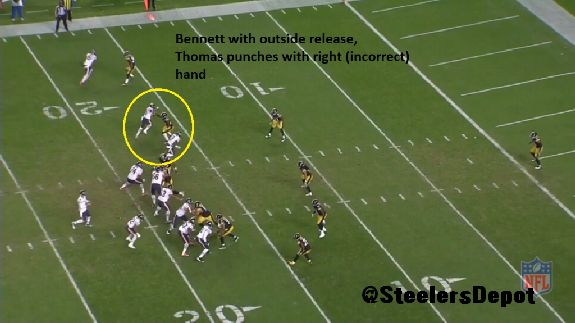 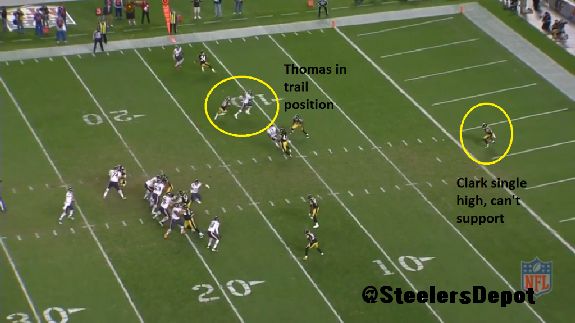 Thomas does his best to recover but it’s a well-thrown ball that Bennett catches, the incomplete call reversed after review.

It was a crushing score to give up on 3rd and 7 in a 27-24 game, extending the Bears’ lead to two possession and sealing victory.

Tough play for the rookie though. Unlikely Thomas had to play tight coverage in the slot very often at Syracuse. Veteran Bennett makes him pay. Lesson learned for the rook.