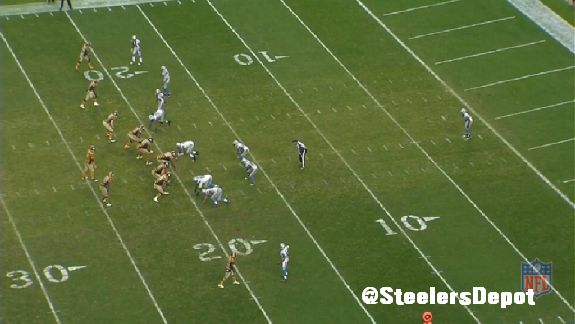 This article is somewhat of a compliment to our last article. The Steelers’ faking their patented bubble screen to put away the Detroit Lions.

Every Steelers’ fan knows the team’s affinity for wide receiver screens. Love it or hate it – most think the latter – they’ve been constants in Bruce Arians‘ and Todd Haley’s offenses. Get the ball out quick to your fast receivers, give them a little bit of space, and let them rack up the YAC. Simple concept.

It’s something you’ll definitely see in the team’s “scripted” plays, the first 15. A perfect example. The Steelers run it on their first series against the Lions. 3×1 formation with Ben Roethlisberger hitting Emmanuel Sanders for a short, two yard pickup.

Of course, like any play, defenses will adjust if you don’t keep them honest. Good offensive coordinators set up their playbook so they’re capable of countering off of their “core” plays. For Haley, it’s faking the bubble screen and going vertical.

Jump forward to third and six at the Lions’ 20  for the Steelers. 2:35 remaining in the game and Pittsburgh is leading by three. A touchdown effectively ends the game. With the team sitting at 2-6, it might as well be considered the playoffs.

Again, the Steelers’ line up in the same look as the GIF above. 3×1. The Lions are in an aggressive look. Tight, man coverage with a single high safety.

On the snap, Roethlisberger turns left and fakes the screen to Markus Wheaton. The key here though is Cotchery. He sells it so well. He comes off the ball slow with his eyes pinned to the cornerback, selling the block. This act fools the slot corner, who bites on the fake and begins to drive on the screen. 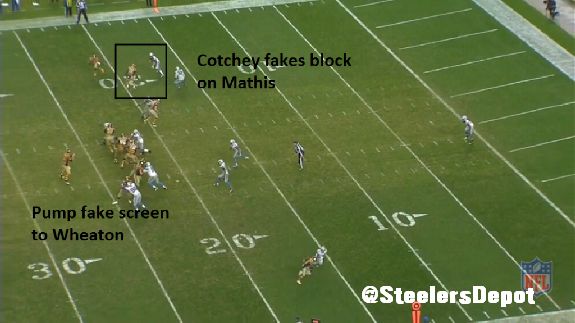 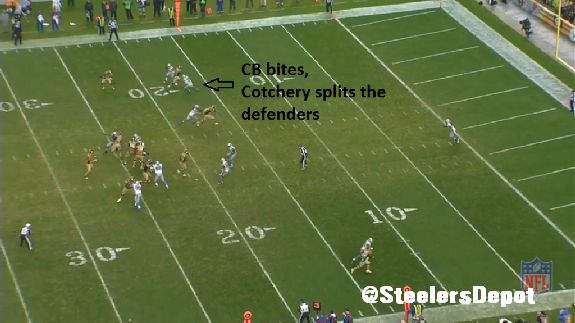 At this point, Cotchery has already won the route. The rest is easy. He immediately gets upfield, splits the corners, and Roethlisberger finds him down the left sideline. With the coverage single high and the safety on the near hash,  he isn’t in position to make any play. 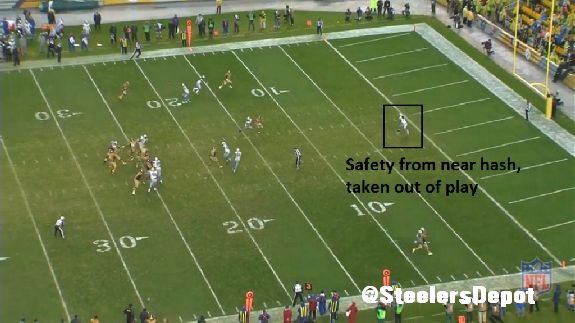 Cotchery scores and the Steelers go on to win 37-27.

This last screenshot sums up exactly how it felt to be a Detroit Lion. Veteran cornerback Rashean Mathis looking at the burned corner, Don Carey, with a “What just happened?” expression while Carey throws his arms down in frustration. 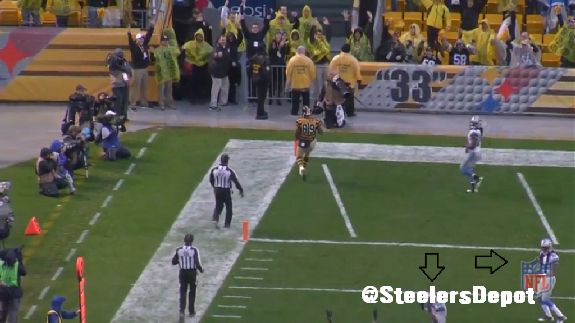 These are the times when you can objectively see the makings of a good offensive coordinator. Running one play in order to set up another. The ultimate chess game.

Haley actually had to put this play away for a few weeks. In Week Three against the Chicago Bears, it got snuffed out, leading to a game-clinching strip-sack fumble return for a touchdown by Julius Peppers.

He kept the play in the back of his mind until he needed it most. It was executed flawlessly with the intended result. A touchdown, a victory, and the hope of keeping their season alive.