A look at the route concept used that led to a touchdown on the Steelers’ final drive against the Baltimore Ravens in Week 13.

Most fans remember the play after this touchdown. An Emmanuel Sanders drop in the corner of the end zone, failing to complete the two-point conversion and securing the victory for the Ravens.

But instead of focusing on that play, we’ll look at the play that created that opportunity. 4th and one for the Steelers on the Ravens one yard line. 1:06 to go in the game, Pittsburgh trailing by eight.

The Steelers line up in 11 personnel with two receivers to the wide side of the field. Ten of the 11 Ravens’ defenders are on the LOS. 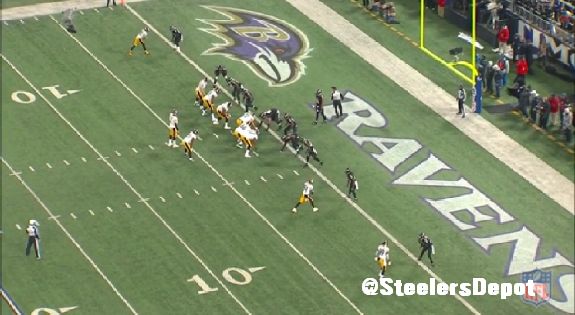 Before focusing on the route concept, this is a “packaged” play. Packaged plays have a built-in run/pass option. Based on the coverage/look, the quarterback has the choice to hand it off or throw. Even on a pass, the offense carries out its run blocking duties, similar to what happens with their smoke screens we profiled last week.

If you remember, these types of plays have garnered a lot of media attention following Tony Romo’s 4th quarter interception against the Green Bay Packers. It was another example of a packaged play.

In this instance, the run option is Power O to the strong side. 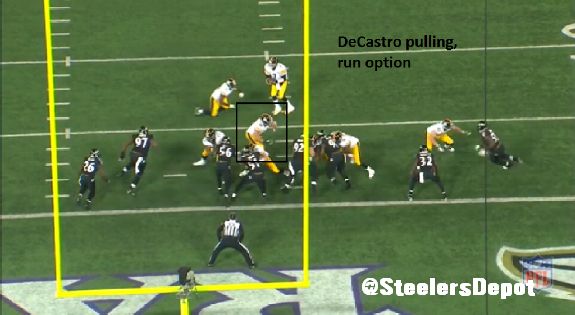 Roethlisberger obviously decides to throw. So let’s focus on the route.

It’s a “slant/flat” combination route between Cotchery and Antonio Brown, lined up in the slot. Cotchery running the slant with Brown to the flat. 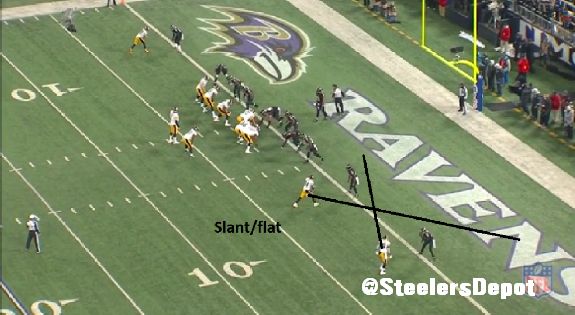 It’s one of the most common routes you’ll see inside the twenties. Defenses must be conscious of this against two receiver sides. If they don’t trade the receivers off, cornerbacks have to be lined up at slightly different depths to avoid getting “picked” on the route. The Ravens fail to adhere to this. 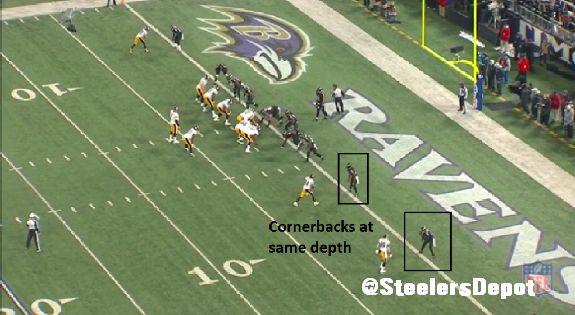 The Ravens hand the Steelers the touchdown. The corners miscommunicate and both cover Brown on the flat. Often times to avoid that rub, the cornerbacks will have a “banjo” call, letting them pass the receiver off to the other cornerback. Essentially, a matchup zone instead of true man coverage. Nickel corner Lardarius Webb ostensibly misses his assignment, failing to pass Brown off and picking up Cotchery on the slant. It’s pitch and catch at this point. 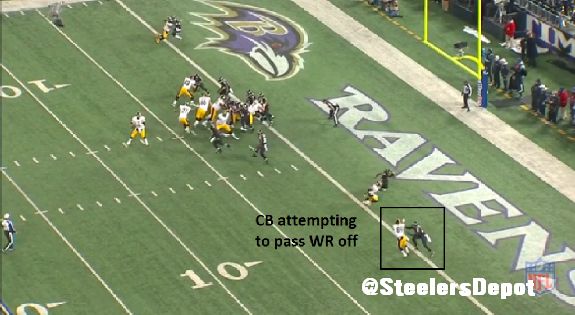 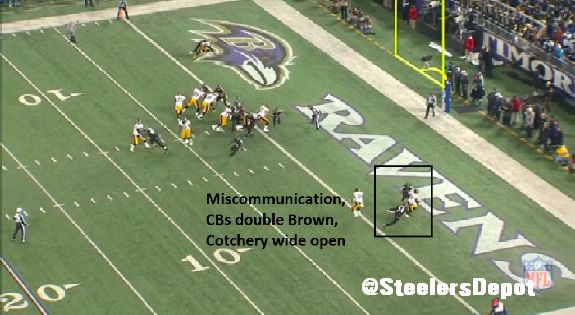 The same play was used – run option and all – on the two-point conversion attempt. And again, the Ravens fail to correctly pass it off. Only this time, Antonio Brown is open on the flat. Had Ben looked that way, it would’ve been another easy conversion and tied the game. Easy to say that now, sure, but that frustrated me more than the “drop” by Sanders. 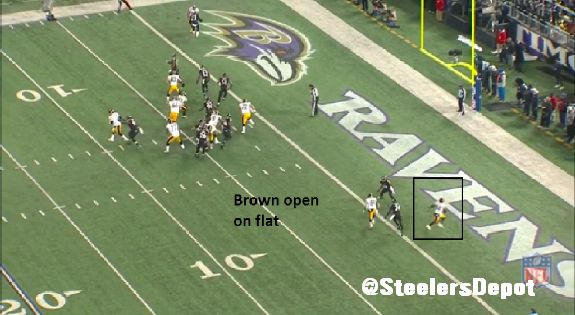 This is one of the reasons why the Steelers don’t need a tall wide receiver in the red zone. It obviously can be an advantage, but there are plenty of red zone concepts that can create separation.

When you’re open, it doesn’t matter how tall you are.