Today, how the Steelers’ – chiefly Steve McLendon – beat zone blocking to stuff the Baltimore Ravens on third down.

Although this series will generally be dedicated to the concept more than the player, this article will hit on both today.

When it comes to evaluating McLendon’s play, there’s a clear dichotomy between fans. Some were encouraged by his play last season while others don’t believe he has the size and strength to be a long-term option. For the latter, the signing of Cam Thomas only fanned that flame.

McLendon doesn’t have the “prototypical” size but it’s his athleticism that makes him a unique threat. That’s epitomized in the play below.

3rd and 1 for the Ravens on the Steelers’ 26. Baltimore doesn’t hide what they want to do. 22 personnel, the second tight end being tackle-eligible Ricky Wagner. Fullback Vonta Leach leading the way on this run. Still zone principles though. If both blockers are covered (defender over top of him), as they are on the far side, they man block. If the frontside blocker is covered and the backside uncovered, he doubles. With the odd front, the right tackle chips and then works to the second level. Let’s show the scheme below. 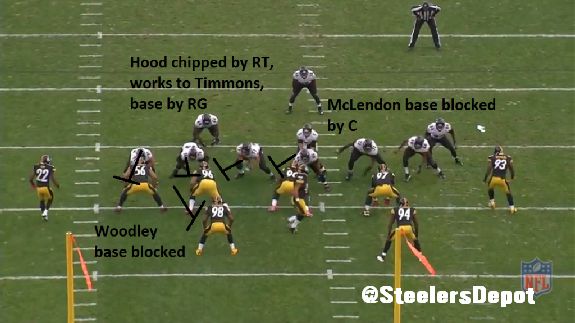 Via motion, the Ravens even smartly remove Troy Polamalu from the playside. 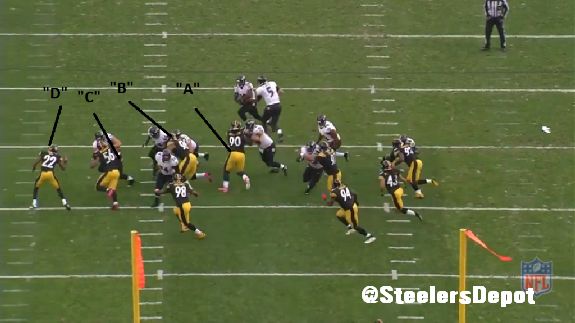 That’s where it starts. If those three can’t do their job, the play falls apart.

Gay, Woodley, and Hood all do their job. They hold the point of attack well enough and clog up any running lanes.

Key here is McLendon. He does have the advantage pre-snap by being shaded playside. It’s that fact, coupled with his athleticism, that makes it such a difficult reach block for center Gino Gradkowski. He simply can’t get in front of the nose tackle and ride him down the line. McLendon gets off the ball in a hurry, gets his arms into Gradkowski, and slips past. 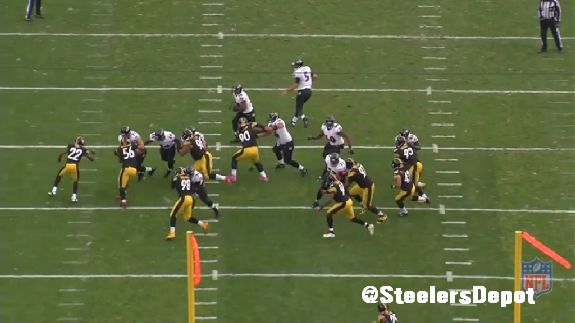 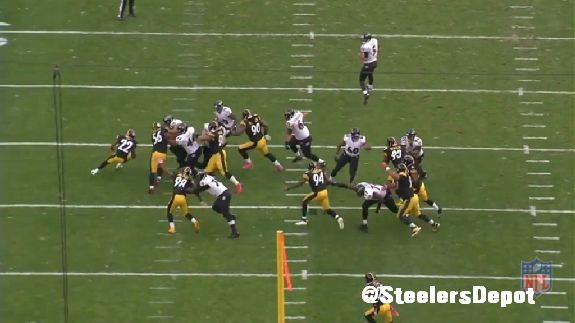 There’s no chance for Bernard Pierce to cut the run back. With the frontside clogged, and the backside taken away, there’s no alley. Not only did McLendon take it away, he finishes the play with a tackle. The Ravens lose a yard and have to settle for a field goal. 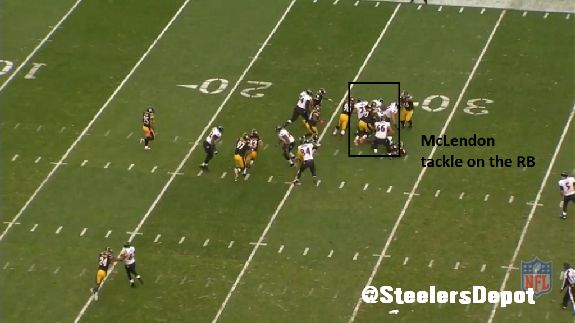 Compare this to a similar play for Cam Thomas last year against the Cincinnati Bengals.

Thomas is unable to get into the backfield in time to bring down Giovani Bernard. It’s the left end, the  smaller, quicker Sean Lissemore who is able to run down the line and bring the back down.

That’s what McLendon brings to the table that your typical plugger will not. Thomas’ and Daniel McCullers’ slow first steps is partly what’s limiting their upside. You can be country strong, and those two are, but still get taken out of the play because you can’t move.

The Steelers’ will be facing zone blocking-heavy teams throughout 2014. The aforementioned Ravens and Bengals, Houston Texans, and Kansas City Chiefs. That’s six games alone off the top of my head.

As more teams adopt that scheme and ask their lineman to be smaller and quicker, defenses must do the same. It’s another reason why movement skills are in higher demand for defensive ends. Not just to rush the passer but work their way down the line against the run.

That’s why McLendon is valuable and why I’m excited to see him out there starting in the middle for the Steelers in 2014.