Today’s breakdown will continue to look at window dressing. It’s an idea we pointed out in the “Antonio Brown Decoy” article and the recent one on Tare routes. An offensive coordinator’s duty is to maximize the talent around you. Be creative, give defenses multiple looks of the same play, and put your offense in a favorable numbers game.

All three aspects occurred on a Le’Veon Bell 11 yard run Week 7 against the Baltimore Ravens.

Counting tackle eligible Mike Adams as a tight end, the Steelers line up in 22 personnel.  Nasty split with Antonio Brown at the top of the screen. A very run heavy look. 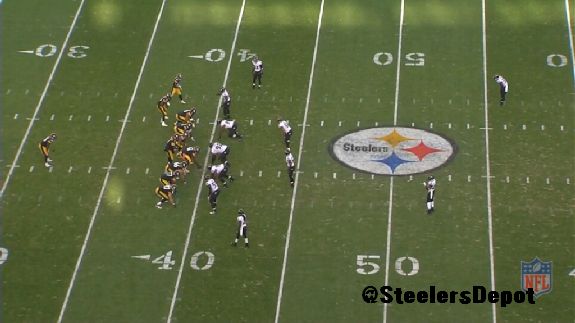 Pittsburgh wants to run this off the right tackle.Todd Haley could line up Will Johnson to the playside, have Marcus Gilbert base Terrell Suggs, and ask Johnson work to the second level. But that simplistic idea of blocking – which can still be effective and is used a ton – presents two issues.

1. It creates more congestion and a smaller running lane.

2. It relies on both blockers being able to execute.

Haley adds in a wrinkle. On the snap, he has Antonio Brown come across the formation as if there’s about to be an end around. Instead of Gilbert base blocking Suggs, he slightly chips and works to the next level linebacker. Will Johnson comes across the formation and acst as a buffer between Bell and Suggs. 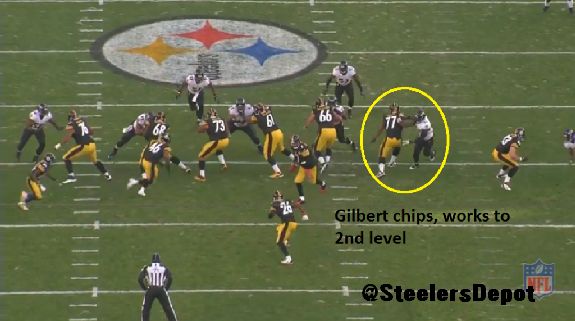 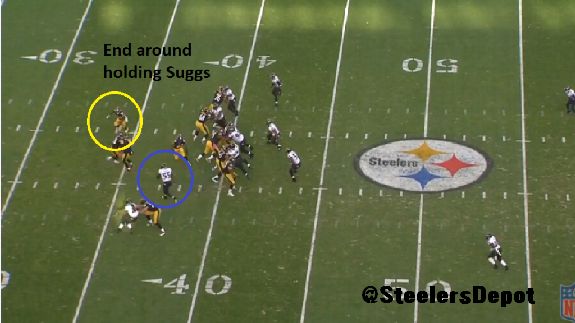 The benefit here is Suggs has essentially been taken out of the play. He widens, respecting the possibility of the end around, creating a huge running lane. Marcus Gilbert works to the second level. Now,both defenders have been pinned with really only one truly blocked. Johnson’s block – if you can call it that – is easy. Suggs is already out of position. Johnson just has to get in the way. 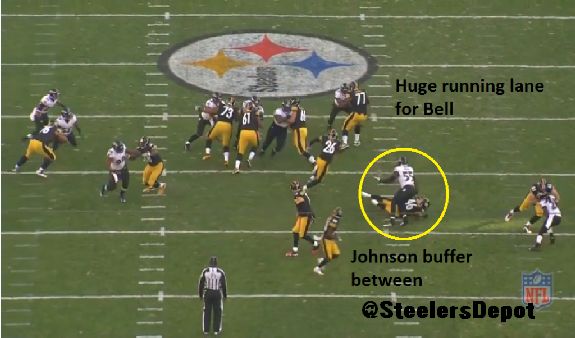 It’s a wonderful concept. Haley is getting everyone involved in the play. He doesn’t “waste” Brown by having him block away from the run. He makes him the lynchpin of the play’s design. Without the threat of the end around, Suggs is going to crash down on the run. And make no mistake, these are not “graduate level” type of complicated concepts. They don’t always have to be. Hold the linebacker, just for a moment, and let your back run for the first down.

And if the linebacker starts to crash on the run, failing to respect the end around? You can bet that will get countered by the same play but with the end around later in the game. Burn the linebacker for gambling. Successful offensive coordinators are able to work off of their plays. That’s how you judge a good one.