Quick and dirty breakdown of a core concept to look for in goalline situations. Talking about reading the “hat” of a lineman to determine run or pass.

Let’s see it in action. Week 7 against the Baltimore Ravens. Steelers lead 16-9 with less than three minutes left in the game. Ravens have the ball on the Steelers’ two. As you’d expect, Baltimore is in a heavy set, three tight ends and two in the backfield. Dallas Clark is lined up on the LOS to the weak side. 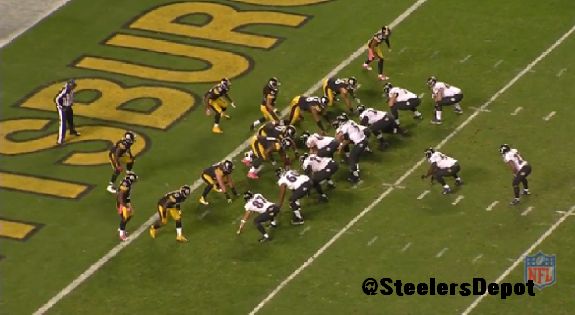 Joe Flacco fakes the handoff to Ray Rice before throwing the flag route to Clark to the back left pylon. Lawrence Timmons has excellent coverage and the pass falls incomplete.

How was Timmons able to avoid biting on the run? He’s reading the o-line, specifically, left tackle Eugene Monroe. There’s no traditional kickslide here but he comes off the ball with a “high” hat. It’s a set for pass protection, not run blocking. Although Timmons never sees it, you can see high hat from the right tackle too, kicksliding against LaMarr Woodley. 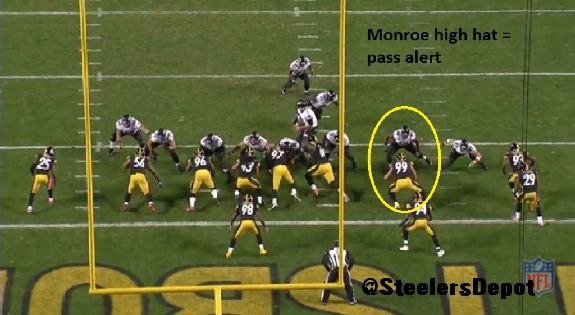 Of course, you might think the fact Clark is releasing into his route is a certain giveaway. And obviously, it can be. But if you look close, Timmons doesn’t watch Clark off the line. If he’s sitting on pass and is late reading the run, he’ll be a non-factor in the play. As a linebacker, you’re always reading your run keys first. 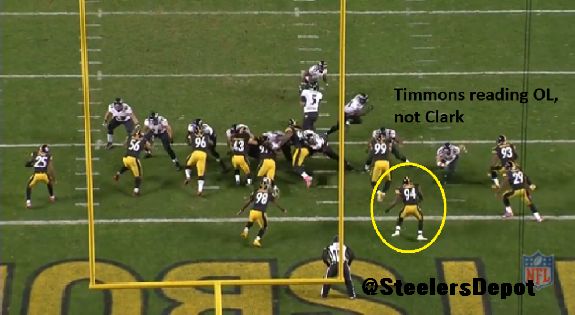 Timmons reacts and pivots once he sees the tackle’s hat and probably the fact Vonta Leach has begun to release into the flats. But Clark is not part of the equation. Monroe told Timmons what he needs to know.

With Timmons’ athleticism coupled by the fact that by this point in Clark’s career, he’s moving at the speed of smell, the linebacker is able to play to his hip, force a tough throw and the incompletion. Textbook play from #94.

High hat is an offensive tell that alerts the defense to run or pass without having to guess on the playaction. Note that Timmons began to bail into coverage before Flacco had completed the playfake (though Ray Rice’s lackluster effort to sell it may have contributed). 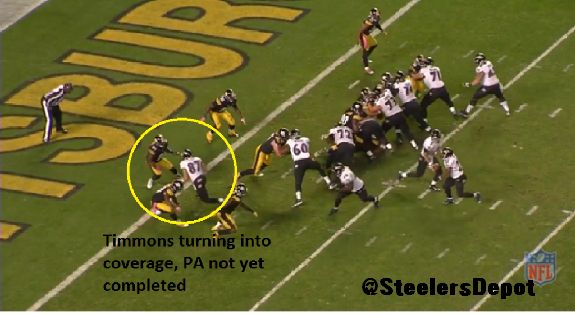 Because if you wait to determine run/pass by reading the back, you’re likely going to be smoked in coverage if it’s pass. And that means you’re going to be the player responsible for allowing six points.