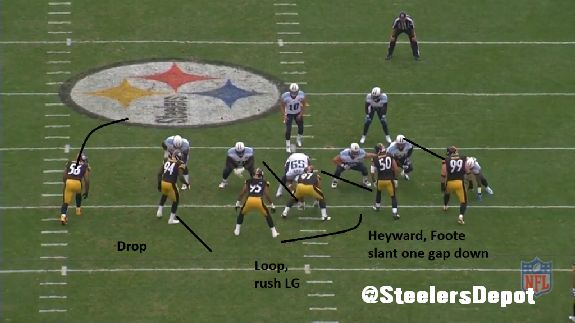 To kick things off, a look at Dick LeBeau’s pressure package to welcome a rookie lineman into the league.

It’s Week One of the 2013 season. Just the 10th career snap for rookie offensive lineman Chance Warmack. His first 3rd and long, 14 to be exact.

The first time in months that LeBeau was able to reach into his bag of tricks.

From the end zone view, let’s take a look pre-snap. 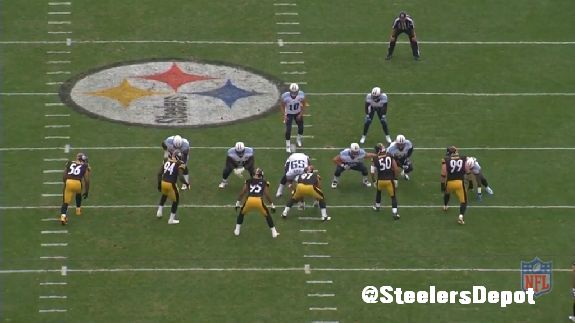 The linebackers have crept up pre-snap. Larry Foote is over the “B” gap between the center and left guard. Lawrence Timmons is showing blitz. Jarvis Jones is shifted from ROLB to over the weakside “A” gap, off the line by roughly two yards. A new wrinkle, both for Jones and the rookie right guard Warmack.

Immediately off the snap, Foote slants hard into the playside “A”, grabbing the attention of the center and left guard. Meanwhile, Cameron Heyward shoots the backside “A”. Jarvis Jones begins to loop over the pair, eventually rushing into the left guard, who alertly peels off Foote when the pressure comes.

But the focus here is on Warmack. Because Timmons’ body language showed blitz (close to the line, leaning forward) the rookie guard hesitates and respects that possibility off the ball. The presumed theory being that even if all six defenders come, the Titans have six to pick it up. The center can squeeze on Jones, the left guard on Heyward, etc.

That could be the case if the rush was vanilla, with each defender charging the gap in front of them. Not the case in the NFL.

Timmons drops into coverage off the snap, reading the tight end and looking to eliminate any possible hot route against pressure. 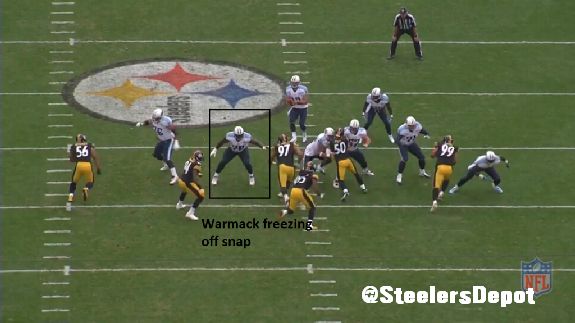 Warmack’s hesitation doesn’t allow him to move laterally to the inside in order to wall off Heyward. Because Foote crashed into the center, there’s no one to get square to the defensive end. Foote’s goal was to never get pressure. It was, in a sense, to act as a nose tackle. Be a distraction. Methodically absorb bodies to free up other defenders. Just at the comparatively svelte 239 pounds, but the result is the same. 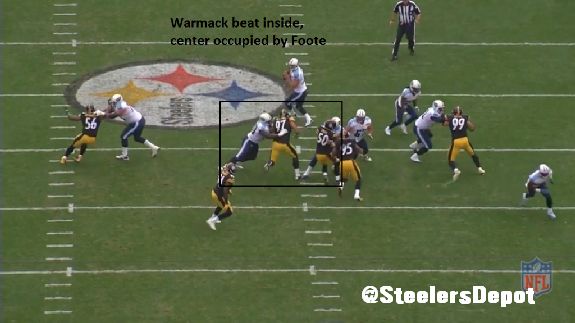 Warmack is too late to recover and Heyward shoots through, getting pressure on quarterback Jake Locker. His throw is ultimately behind his intended target and the Titans are forced to punt. 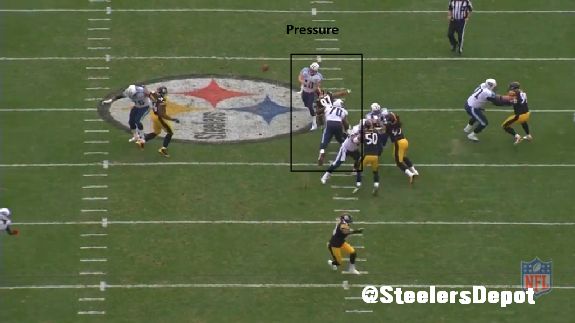 Rush just five, dropping six into coverage, and still get immediate pressure? That’s the ultimate goal, the reason why offensive coordinators hate seeing LeBeau on the opposing sideline as the know their protection schemes are going to be tested. One misstep by a lineman and the whole thing falls apart.

For a rookie like Warmack, it was his first taste into what the NFL is all about. Welcome to the league, rook.