Breaking down the “scrape” concept from the Steelers’ linebackers and showing multiple ways how it can be effective against the read option.  We’ll take a look at two plays from the 2013 season.

The scrape call is essentially two linebackers exchanging run fill responsibilities. Instead of the outside linebacker being responsible for the edge or “C” gap and the inside linebacker filling the “B”, they trade. Quick picture. 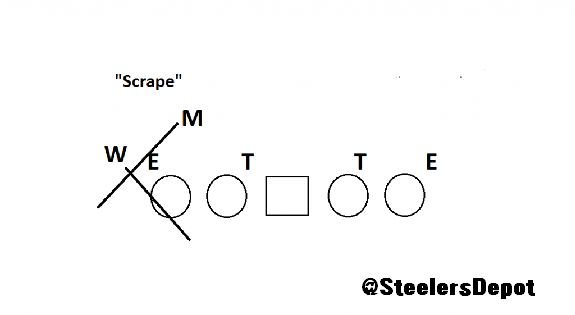 It’s one way to defend the read option. The read option is about putting the defense in a lose-lose situation. Read the end man on the line (EMOL) and carry/give based on that. In response, defenses would drop the safety into the box. And in response to that,, teams would air the ball out, taking advantage of the single high look. Eternal chess match football creates.

It of course is seen more at the college level but seen enough in the pros that it must be repped in practice to defend in game.

Instead of each defender defending an area, they defend a player. In Week 17 against the Cleveland Browns, Jarvis Jones is responsible for the running back with Vince Williams “scraping” and replacing Jones to the edge, responsible for Wildcat quarterback Marqueis Gray. 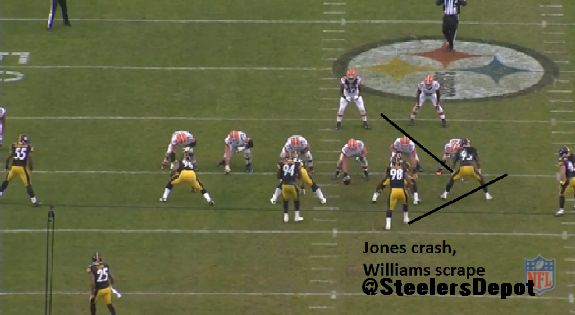 It’s an effective counter because the offense can no longer “read” a defender. The defense is aggressive, attacking, and forcing the offense’s hand. 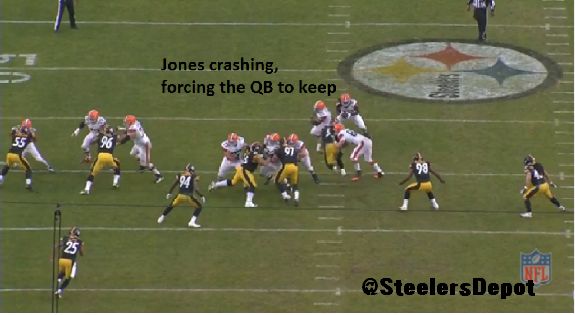 The quarterback sees Jones crash hard and keeps the ball but because Williams is scraping, he meets the QB unblocked and makes the tackle after a four yard gain. 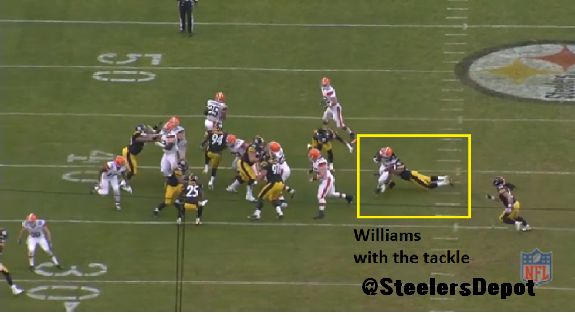 It’s also capable of messing with offensive blocking schemes. Back up to Week 15 versus the Cincinnati Bengals. Not nearly as much of a read element but the Steelers are using the same technique. Jason Worilds crashes and Lawrence Timmons scrapes, replacing him, over the top. 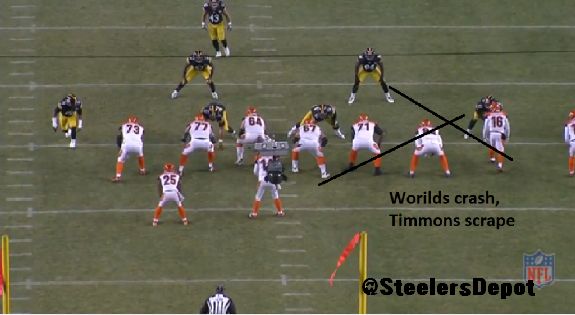 Bengals are running Power O. Backside guard trapping. Schematically, the Bengals want to crash down with the playside tackle, Andre Smith. Left guard Andrew Whitworth pulls and wants to work through the “C” gap. Jermaine Greshman wants to base and kick out Worilds on the edge. 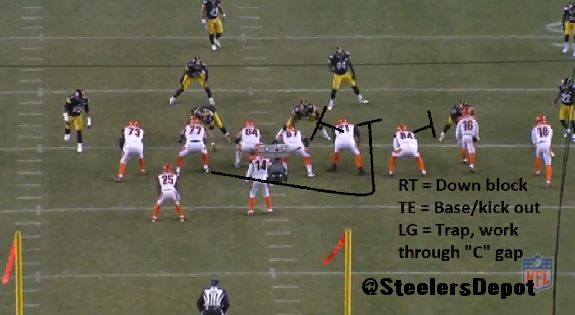 Here’s the issue. With Worilds crashing down, Gresham blindly follows since that’s his assignment. He isn’t able to adjust to the scrape, perhaps chipping, passing Worilds off to the guard, and working to Tmmons.

When Whitworth comes through the gap, he winds up doubling Worilds, too. This leaves Timmons unblocked on the scrape. 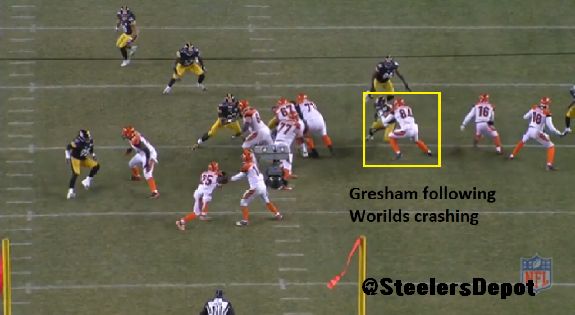 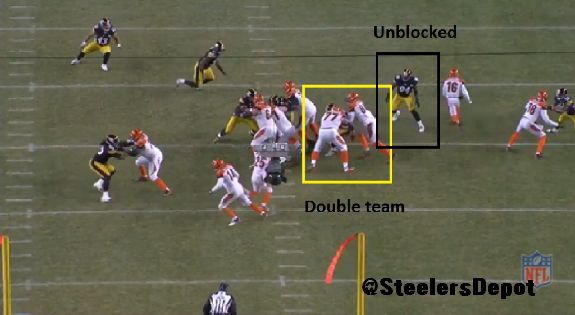 With the “C” gap clogged up, running back Giovani Bernard is forced to bounce the run to the outside. Right into Timmons’ arms. And he ain’t going to miss. It’s a miniscule gain of one.

Keep in mind scraping certainly isn’t solely used to defending the read option. It’s just another wrinkle in a defense to keep them guessing. The more looks you can throw at them, the better your chances are on Sunday.