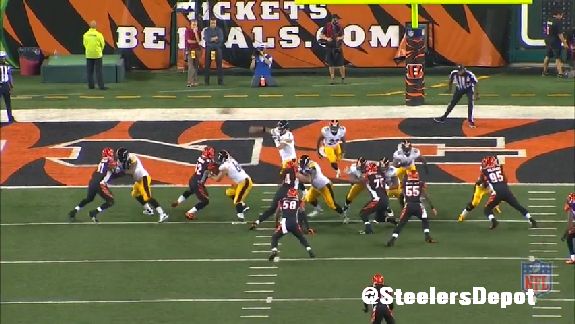 Today, we’ll look at how Ben Roethlisberger reacted to eight in the box against the Cincinnati Bengals in Week Two.

2nd and 7 for the Steelers on their own five. Roethlisberger comes to the line and sees the Bengals in a traditional two deep shell. 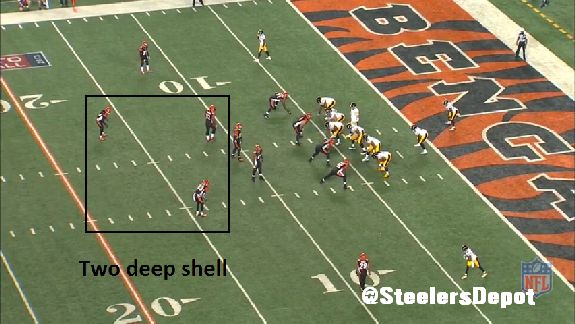 The call in the huddle is a run for Felix Jones up the left side. Against a two high look with only seven in the box, a run is the “safe” and traditional call.

But as the Bengals and then defensive coordinator Mike Zimmer loves to do, the safeties rotate. George Iloka, #43, steps down into the box. Reggie Nelson rotates to the middle of the field as the single high safety. 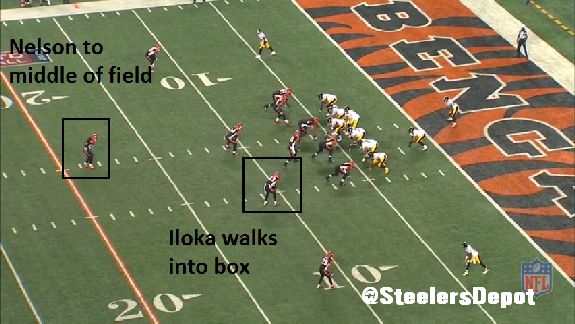 It’s called the 46 defense. It isn’t coined for defensive alignment but for the uniform number of the first safety, Doug Plank, to make a home near the line of scrimmage. Plank was utilized aggressively in the Chicago Bears defense, led by Buddy Ryan.

Plank explains it in a book I’ll likely reference a ton through this series; Tim Layden’s Blood, Sweat, and Chalk.

“So this one day [Ryan] puts this defense up on the board where I move up from free safety to middle linebacker, along with some other shifts and changes. We’re getting ready to leave the room, and one of the guys says, ‘What are we going to call this one?’ Well, Buddy was always drawing up packages but never drew them up with peoples’ names or with X’s and O’s. He would always just write numbers.” Ryan circled Planks number 46 several times, over and over, and then said, “We’ll call it ’46.’”

Ryan explains the driving force behind the concept.

“In ’79, when I first started with the 46, it wasn’t really a scheme at all, it was just something we tried. We had to do something. And it did mess up some of their blocking patterns.”

That’s one of the goals. To put it simply, the line doesn’t have the manpower to block with the extra defender entering the mix. Teams that don’t check out of the run are going to have a difficult time running the football. Especially a Steelers’ offensive line that was awful the first half of the year.

Roethlisberger makes the cerebral play. He checks out of the run, opting to throw a smoke screen to Antonio Brown.

How does he convey this on the fly, not making it clear to the defense that he’s changed the play? The subtle signal of grabbing his facemask, a symbol to Brown for the audible. You can see Ben turn his head, see the safety, and immediately grab his mask. 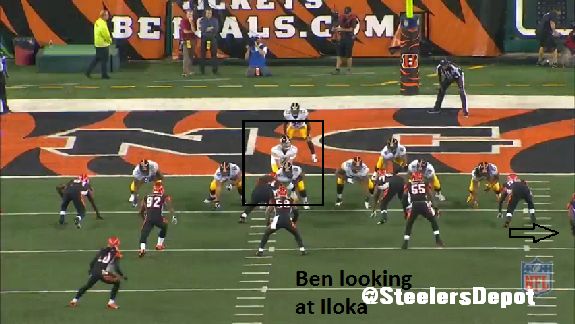 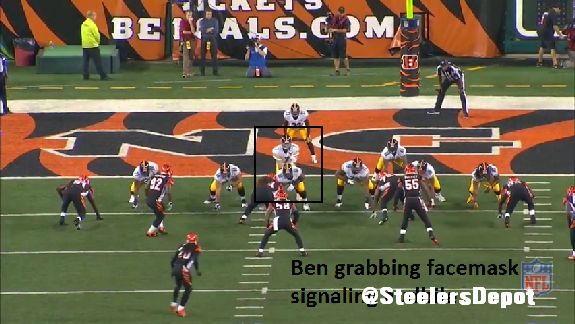 None of the nine other offensive players know the signal, the only way to ensure the defense doesn’t recognize the change. On the snap, the line still run blocks and Jones is anticipating a carry.

With Brown one-on-one with the corner, the play is effective. He’s a playmaker that is at his best after the catch. If he gets past the corner, it’s a huge play. And even if the cornerback makes the tackle, odds are good you’ve gained more than you would trying to run against a stacked box.

The corner is able to make a shoestring tackle against Brown but it still goes for a gain of eight and a first down. Low-risk play with a lot of upside that beats the alternative of running into a brick wall. It’s a safety valve Roethlisberger has all the time, and an option he went to repeatedly throughout 2013.

Little things like this that can separate quarterbacks. And keep teams out of 3rd and long.