We’ll look at another route combination, one slightly less specific, in today’s film session. How the New England Patriots defeated man coverage with a “man beater” against the Steelers in Week 9.

3rd and 6, empty set for the Patriots. 3×2 formation.  Steelers are in dime. With three receivers to a side, a defense has to play some form of off coverage. Even though it isn’t the team’s style anyway, all three corners can’t be rolled up to the line. If they do, they’re at risk of getting picked off by combination routes (think slant/flat). 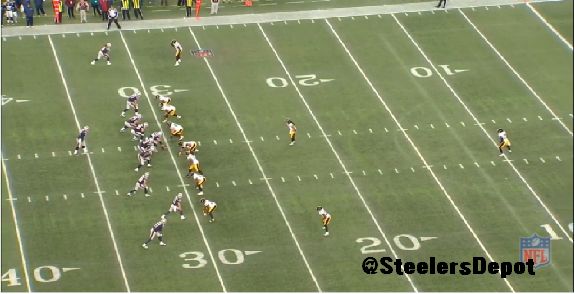 The route concept consists of: #1 running a crosser, #2 down the seam, and #3 to the flats. Remember receivers are listed in order numerically from the outside working in. 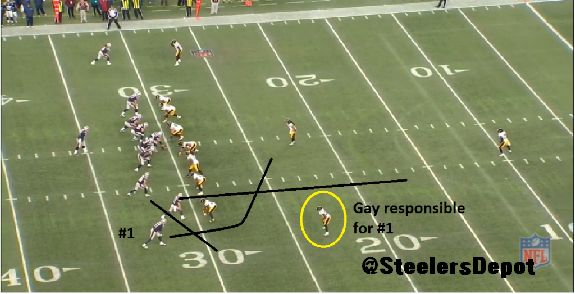 The Steelers, as alluded to, are in man coverage. The pass is thrown to Aaron Dobson, the #1, on the crosser. Here’s the issue for William Gay in coverage. He’s in off coverage because of the bunched formation. With Dobson running shallow, it creates natural separation against the off corner. Although the #2 doesn’t really get in the way, he does act as a slight buffer against Gay while running down the seam. 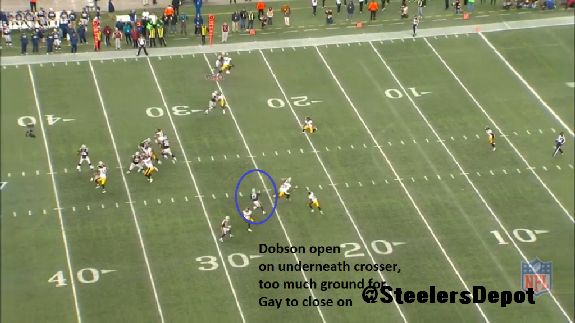 It’s an easy completion for Tom Brady and a ten yard pickup.

There’s no secret here. In this instance, the Patriots know how the defense has to react to a three receiver side with some bunching. Force the off coverage and run an underneath route to exploit it. Results in an easy gain and New England moving the sticks on 3rd down.

The best way to counter? Instead of playing true man, switch to zone and “pattern read.” Still a concept I’m learning about but it’s basically matchup man coverage, similar to basketball. Reading the releases and routes of each receiver determines who you match up with. Perhaps instead of Gay being responsible for the crosser, he carries anything vertically – like the seam route of the #2. One of the underneath corners, like Shamarko Thomas, can pass him off and look for an underneath route. It isn’t easy to handle those types of combination routes, but man coverage in this situation has little success rate.