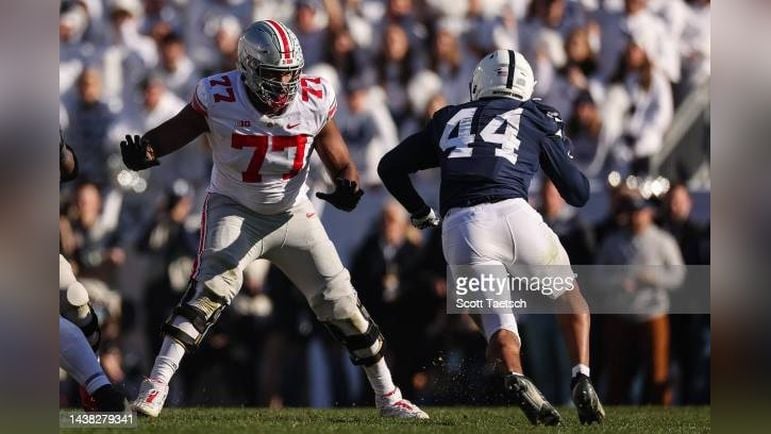 From now until the 2023 NFL Draft takes place, we hope to scout and create profiles for as many prospects as possible, examining their strengths, weaknesses, and what they can bring to an NFL franchise. These players could be potential top 10 picks, all the way down to Day 3 selections and priority undrafted free agents Today, we’ll be profiling Ohio State OT Paris Johnson Jr.

— Ideal frame to play Left Tackle
— Elite length
— Great burst; best seen when firing off the snap and reaching the second level
— Footwork and athleticism are as advertised, does a nice job staying wide and square, not putting himself in off-balance positions
— Has the agility to move laterally to seal and work on the edge
— Powerful initial punch will knock guys off their feet, especially on down blocks
— Plays with above-average fire and nastiness, will look to finish his blocks
— Functional core strength to help fend off bullrush and anchor
— Has the awareness to successfully fend off stunts
— Most dominant when he’s able to mirror and work in the phone booth
— Arrow is pointing up – improved significantly as the season progressed
— Has position flexibility played both right guard and left tackle at a high level
— Impressive off the field in the way of academics and philanthropy

— Although it’s his natural position, only played left tackle for one year in college (played guard first two years)
— Plays too high allowing guys to get under his pads and push him back
— Falls off blocks too quickly at the second level
— Occasionally struggles with inside counters due to two-hand punches to start his pass sets
— Needs to improve lower body strength to help anchor power rushers and be more of a body mover in the run game
— Often has too wide of hand placement and slow to the punch, gives guys access to his chest
— Might be susceptible to more holding penalties in NFL due to wide hand placement

Paris Johnson Jr. is widely regarded as one of the top prospects in the 2023 NFL Draft, and when you see him walk through the tunnel it’s easy to see why he has NFL scouts salivating. He certainly passes the eye test with his 6’6″ and 310-pound frame. The official measurements of his arms won’t be known until after the NFL Combine, but his length definitely pops on tape.

He has a mean streak as well. You may have seen it already without already knowing it. Johnson had a video go viral while still in high school looking like a true man among boys.

Paris Johnson was a MENACE in high school 😳 pic.twitter.com/8C9FkrFDRw

He was able to channel that mean streak in the hyper-competitive atmosphere that Ohio State offers and it helped him rise into a starting role at right guard in his true sophomore year. In 2022, Johnson was moved back to his natural position at left tackle and put together a stellar season, ending up being voted a Consensus All-American.

Turning on the tape, it’s easy to see that that finisher’s mentality has not left Johnson. He is constantly trying to put defenders on the ground and keep them there. He’ll block defenders all the way to the bench if he can.

Johnson also carries heavy hands and his initial punch can easily take guys to the turf. Here are two examples on down blocks against Notre Dame.

While the above clips are exciting highlights, the most intriguing part of Johnson’s game in my opinion is his athleticism. He shows a great burst off the snap vertically and laterally and is as fleet-footed as you’ll find at his size. Due to this, it was extremely rare for Johnson to lose a pass rush rep to a speed rusher off the edge. He was consistently able to stick with them or simply run them up the arc.

That burst helps him excel at getting up to the second level to eat up linebackers on combo blocks where he can combine his athleticism and power together, as you can see below.

Johnson’s athleticism also helps him seal the edges for outside runs. His long arms can reach edge defenders and then he brings his feet, keeping them from reaching the ball carrier.

Johnson’s biggest weakness right now is his hands. He often punches too wide, giving up his chest to defenders. You can see many times on tape that he punches wide around the outside of defenders’ shoulder pads and clamps on.

A narrower punch not only will protect from defenders gaining control of his chest, but it’ll also help him from getting holding penalties at the next level. His strength and balance often protected him from the negatives that come with the wide punches, but there were a few times on a tape that it got him in trouble. More experienced NFL edge defenders will be able to take advantage of this if it’s not fixed.

He occasionally struggled with inside pass moves. A few times on tape you saw him lunging after the defender swiped his two-hand punch that you can see in the first clip below versus Notre Dame. It will ultimately depend on what system he ends up in, but significantly decreasing the usage of the two-hand punch will help his game ton. When you only use one hand or a “dead hand” to take the brunt of the swipe, you can still stunt the rush with the opposite arm.

He loses both clips inside but I will say he does a nice job of recovering and working his defender down the line further. It gave his QB the opportunity to slide away from pressure. While the reps result in pressures, neither time do the defenders get a hand on the QB.

Watch this rep as he only goes with a one-hand punch. He initially loses his leverage inside, but with his one-punch, he still has his feet underneath him. He then uses his quick feet to work back square, effectively stymying the inside move.

Some of Johnson’s best work is when he’s working in the phone booth where he can use his strength and agile footwork in harmony to effectively mirror and stall out reps. You can see in these reps how even when his punches land wide, he’s able to fit and refit continuously to keep control. He’s made quite a few dancing partners in 2022.

While Johnson has great footwork, he could stand to add some strength to his lower half. He has shown some trouble against power rushers and anchoring against bull rushes.

He does have the core flexibility and strength to sit into a bullrush, as seen below, but could greatly benefit from adding a “hop step” technique to use against power rushers.

Johnson is a really intriguing prospect. There’s a little bit of projection to him as he’s only played 13 college games at left tackle, but you could tangibly see him get more comfortable as the season progressed at his natural position. Right now, I think the biggest thing he’ll struggle with in the NFL is power rushers. Until he stops giving up his chest due to his poor hand technique and bolsters his lower body strength, they are going to present him with problems. I don’t think he’s the squeaky-clean prospect that some people may promote him as, but he possesses all the intangibles you could want in a franchise left tackle: size, athleticism, aggressiveness, smarts, etc. The technique is all coachable and can be worked out of his game. For that reason, I could easily see him being the first offensive lineman off the board in this year’s draft.

In regards to the Steelers, I feel like we go through this every year in terms of “is this the year the Steelers finally draft a tackle in round one?” and it doesn’t happen. It hasn’t since 1996. However, if Johnson were to fall to Pittsburgh at 17 it would be hard not to be pounding the table for him. His length and aggressiveness are both things that Steelers OL coach, Pat Meyer, covets and I think he could really thrive under his coaching. I don’t think Johnson’s tape right now warrants the slam dunk top-five/top-ten hype, but when he lights up the combine with his size and athleticism like I think he will, it will certainly be hard to see him falling all the way to 17.

Projection:  Early to Mid First Round