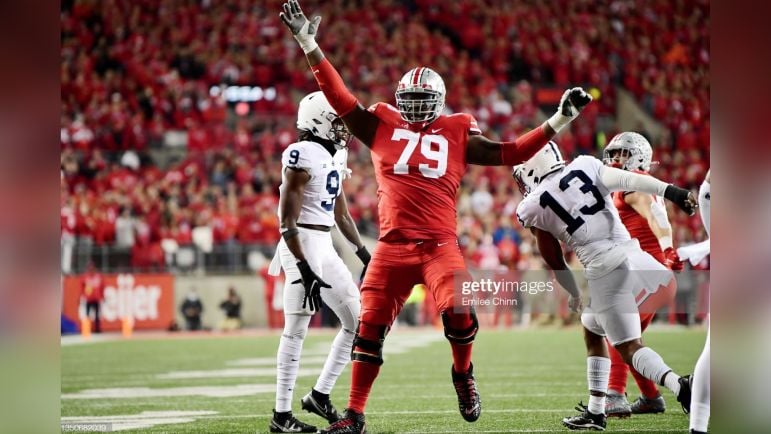 From now until the 2023 NFL Draft takes place, we hope to scout and create profiles for as many prospects as possible, examining their strengths, weaknesses, and what they can bring to an NFL franchise. These players could be potential top 10 picks, all the way down to Day 3 selections and priority undrafted free agents. Today, we’ll be profiling Ohio State OT Dawand Jones.

— Quick first step out of his stance, good timing off the snap
— Good natural knee bend for a person of his size
— Gets good depth in his vertical sets
— Uses his length well to land punches and win the half man relationship
— Almost always gets the first significant contact against a pass rusher
— Great hand fighter, able to punch and reset his hands several times throughout a play
— Good latch strength which helps steer defenders and generate power
— Can put a defender on skates with great contact strength and leg drive
— Good competitive toughness, finishing plays to the whistle and looking for work at the end of plays

— True senior prospect from Indianapolis, Indiana
— 21 years old, will be 22 in August
— Two year starter at right tackle for Ohio State
— Was a part of the number one scoring offense in college football in 2021
— Played his 2021 season with Paris Johnson Jr. next to him at right guard, another highly touted tackle in this draft class
— Started 25 games, missed Wk. 11 in 2022 (vs. Indiana) due to an undisclosed injury.
— Four star prospect out of high school, consensus top-15 player in Indiana in 2018
— Had multiple D1 offers to play basketball as well, averaged 17 points per game and 9 rebounds per game
— Second team All-Big 10 honors in 2021 and 2022

How could a breakdown of Jones’ game begin in any other way than to highlight how he uses his length. On the plus side of 6’8″, and with a lot of buzz about his yet-to-be-confirmed freakish arm length, his ability to land an early punch against a defender sets the tone for each rep. Here, against the Iowa Hawkeyes, Jones creates leverage for himself with great punch timing and placement, getting his inside hand to the upper arm/shoulder pad area. He executed the difficult part of the block very well, but stopped driving his legs at the wrong time. While it was an overall positive rep, he could have had the defender in another zip code.

Weighing in at nearly 360 pounds, his short area quickness is understandably lacking. With marginal foot speed, it is important to have good mental processing or you will consistently find yourself a step behind the competition in the NFL. In this clip against Penn State, Jones identifies the twist stunt and jams the wide 7-tech defender before smoothly transitioning to the twisting 0-tech. Part of the success here is found in the play recognition, but once again his superior length comes in handy. His long arms make it extremely difficult for the twisting defender to find a clean angle to the quarterback.

On this play, Jones shows off his ability to drive a defender back. He quickly latches onto his target with both hands and drives his legs with square hips to kick the defender out several yards. Wearing the number ‘4’, and compared to Jones’ size, the Michigan State defender looks like a much smaller defensive back or undersized linebacker, but he is listed at a respectable 250 pounds. That really puts Jones’ size into perspective as he moves the defender with ease. There is a moment where Jones flips his hips perpendicular to the line of scrimmage which a better NFL defender will take advantage of, but he shows impressive latch strength and overall competitive toughness by staying engaged with the block for roughly 20 yards.

He is a natural hand fighter which pairs well with his length since he is usually able to make first significant contact. Several times on tape, Jones forced defenders to fall flat on their face using their momentum against them with the snatch-and-trap technique. His hands are very active, and this is one of his go-to techniques. Defenders are forced into awkward positions when Jones is able to land a punch which sets up his go-to move nicely.

His change of direction leaves a lot to be desired which leads to some bad looking reps. In this clip, Jones realizes pretty quickly that he has taken the wrong angle. He tries to recover and ends up stopping in the intended rushing lane. He could have helped widen the hole by staying the course with his (wrong) angle, but instead he tried to recover and further clogged up the hole with his massive 360 pound frame.

Jones is an intriguing tackle prospect in the NFL. He is able to generate a lot of power with good use of hands. When paired with his unique length and overall size, he will create a lot of issues for pass rushers at the next level. He moves well for a 360 pounder, but change-of-direction is obviously going to be an issue against highly athletic edge rushers.

He will be a sought after tackle in this draft class, and there will likely be a lot of buzz around his arm length once the official measurements come out. My pro comparison is Orlando Brown.

He would work well in a quick passing offense that utilizes power running schemes. Zone schemes could work if he isn’t being asked to climb to the second level often. Jones played right tackle in college, but if his hand usage translates, I don’t see a reason why he couldn’t play left tackle in the NFL. He can provide the team with upside to be the long term solution at tackle. He very well could end up on the Steelers’ radar for one of their three top 50 draft picks.