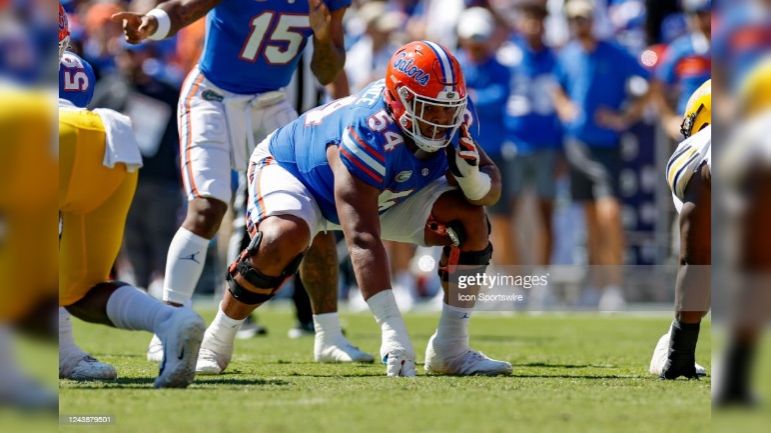 From now until the 2023 NFL Draft takes place, we hope to scout and create profiles for as many prospects as possible, examining their strengths, weaknesses, and what they can bring to an NFL franchise. These players could be potential top 10 picks, all the way down to Day 3 selections and priority undrafted free agents Today, we’ll be profiling Florida OG O’Cyrus Torrence.

— Possesses incredible height, size, and strength for the position
— Thick build with girthy arms and legs to absorb contact at the LOS
— Stout lower half that can drop anchor against the rush and displace defenders in the run game
— Strong upper body that can move interior defenders off the ball and send smaller defenders flying as a run blocker
— Has the strength and torque to perform reach blocks and turn defenders away from the ball
— Can climb to the second level to pick off linebackers or safeties
— Engulfs smaller defenders with size, springing runners in the open field
— Heady pass protector that scans for work, looking to help fellow OL
— Latches on in pass protection, completely neutralizing the opposition
— Sheer size, strength, and power make him difficult to move off his spot
— Four-year starter with experience at LG and RG

— Could stand to shed some weight for more mobility
— Isn’t the fleetest of foot when it comes to working in space or in pass protection
— Can do a better job consistently landing his punch and finishing blocks
— Drops his head and lunges forward on occasion, leading to whiffed blocks
— Ends up on the ground more than you would like to see from a player of his size
— Lack of lateral movement skills will lead to missed blocks in the open field
— Would like to see more consistency regarding his play demeanor and aggressiveness

— Senior prospect from Greensburg, LA
— Ranked No. 69 at his position in the state of Louisiana and 158th nationally in 2019
— Started in 13 of the team’s 14 games as a true freshman in 2019
— Played and started in all 11 of Louisiana’s games in 2020
— Started twelve games at right guard, missing two due to injury in 2021
— Transferred from Louisiana to Florida in the spring of 2022
— Started in eleven games in 2022 at RG
— First Gators offensive guard to be named a Consensus All-American
— 2022 Consensus All-American, 2022 AP First Team All-America, 2022 First Team All-SEC, 2021 Sun Belt First Team Offense
— Named a team captain in his only season on campus at UF
— Posted an 88.0 overall grade at Pro Football Focus, the highest of all Power Five OGs

Florida OG O’Cyrus Torrence enjoyed a terrific 2022 campaign to cap off the productive college career that his started with the Rajin’ Cajuns before making the move to Gainesville. When you first lay eyes on Torrence, you see a mountain of a man when it comes to the offensive guard position, being listed at 6’5, 347lb. He looks every bit of that size, having the thickness and density to literally create a wall at the LOS, allowing zero sacks or hurries on the season while committing no penalties either.

When you plug in the tape on Torrence, you see that size come in handy as a run blocker as he can engulf his opposition at the LOS or at the second level. Watch this rep as Torrence climbs to the second level to seal off the backer, giving the RB a wide-open cutback lane for the walk-in TD.

Torrence’s 347lb allows him to generate a fair amount of power in the running game, easily displacing opposing defensive linemen off their spot. Here is an example against Kentucky where Torrence takes the 4i tech and kicks out to the sideline, springing the runner into the second level for the first down.

If you want a good example of what Torrence can do in the running game, take a look at this clip where he runs potential top-five pick #88 Jalen Carter down the field, pushing him back five yards with relative ease.

For being nearly 350lb, Torrence does a great job working to the second level and finding work in a phone booth. Here against Georgia, we see Torrence combo block the DL up to the LB, getting a piece of the NT as the runner sneaks through the opposite gap and picks up first-down yardage.

Torrence does a great job generating torque and turning his opponent’s shoulders away from the play, creating a natural seal in the run game. Here is a good example of Torrence sealing off the Dl from Utah and then proceeds to get under his pads and toss him into his Utes teammate, taking out two defenders with one block.

Torrence plays with great awareness in pass protection, scanning for work at the LOS. Here are a couple of examples of Torrence doing a great job of picking up twists/stunts upfront, and keeping the pocket clean against opposing blitz packages.

You love to see a guy like Torrence freed up in pass protection, as he does a great job looking for the assist when a fellow OL is engaged. Here is a great example against Tennessee where Torrence levels an unsuspecting DL.

Still, there are a few issues that pop up in Torrence’s game. He tends to duck his head and lunge forward into blocks, causing him to whiff on some attempts. Here is a clear example against Georgia where Torrence’s hand placement on his punch is too wide as he looks to hug the DE rather than punch inside his chest. He drops his head and lunges forward, whiffing the block completely.

Torrence also needs to do a better job of sustaining his blocks for longer periods of time as well as improving his hand placement. Here against Jalen Carter, we watch Torrence get an initial strike on Carter, but Carter proceeds to rip through Torrence’s outside shoulder, clearing the block attempt, thus forcing Anthony Richardson to step up in the pocket and dump it off to his back.

Overall, O’Cyrus Torrence is a thickly-built offensive guard that has the size, strength, and experience you look for. He has the frame and sheer power to maul opposing defenders in the running game as well as the sturdiness in pass protection to sit in and anchor against the strongest interior defenders. Still, after watching more games of Torrence, I came away wanting more in terms of consistent nastiness to finish blocks in the running game as well as better overall punch and hand placement. He isn’t a terrible athlete relative to his size but losing 10-15 lbs could do him wonders in terms of working in space and being quicker on the move.

Given the size comparison, I initially wanted to compare Torrence to Brandon Brooks, but Brooks is a far better athlete. After watching several games of Torrence, I compared his game to former NFL guard Larry Warford. Warford, like Terrence, was a massive human being (6’3, 332lb) that thrived in a gap/power scheme, using his sheer size and strength to bully his opposition in the running game. Warford was also thickly built, making it a chore for defenders to work around him in pass protection, Still, Warford struggled to work in space like Torrence and wasn’t the quickest at making blocks and would occasionally fall off blocks as well.

Warford was selected in the third round of the 2013 NFL Draft and was elected to three Pro Bowls as one of the better run blockers during his time in the league. I would expect a similar career path for Torrence who should get drafted a little earlier than Warford as a more accomplished pass protector, but also possesses the ability to be a quality run blocker for many seasons to come. Given the Steelers’ need to add talent to the OL, drafting Torrence to potentially take over for Kevin Dotson at LG could notably improve this team’s ability to run the football while giving Pittsburgh a more reliable pass protector on the interior to keep Kenny Pickett upright.