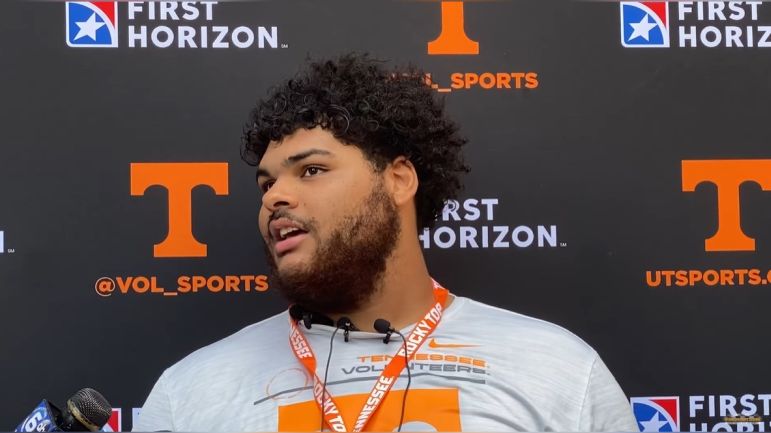 From now until the 2023 NFL Draft takes place, we hope to scout and create profiles for as many prospects as possible examining their strengths, weaknesses, and what they can bring to an NFL franchise. These players could be potential top 10 picks, all the way down to Day 3 selections, and priority undrafted free agents. Today I’m visiting the game of Tennessee Senior offensive tackle Darnell Wright.

Wright packed it up after High School and took his talents to Knoxville and made an impact immediately as a freshman after just being a top 10 Nationally Ranked prospect. Tennessee’s offense would see their offense take off in the years to come. After setting school records in points scored (511) and total offense (6,174). When watching Wrights tape, a few basic thoughts jump immediately. He’s a very large guy that struggles with bend, but he wins primarily with good hand placement and getting his face in defenders’ chests. In the clip below you’ll see that he misses initially but his feet allow him to mirror Anderson and reset his punch keeping the block alive. His punch and hand placement are a huge win for him in most any matchup.

As listed above Wright also has a slight issue with giving up the inside with his left leg always wanting to drop back to help regain balance. Training the post leg to stay firm and never give up ground needs to be somewhat natural. While it is something that will get better, it’s a little discouraging that he’s developed this bad habit, especially going into the draft. NFL edge rushers will pick up on this and absolutely have a field day against him. Although an obvious facemask, here’s one of his more obvious examples against Alabama.

Wright has tremendous size and that’s obviously going to help him in his transition to the pro game but one area I’d like to see is him attain that nasty, face in the fan mentality. In the clip below you’ll come to notice that in this rep, he climbs to the next level efficiently but fails to finish the block. That’s a play you’d like to see him just finish To’oto’o. He’s so close in so many areas in his game but finishing primarily stands above all of them.

Wright at his size, is going to have to acquire some flexibility in his game. He was great in his game against Alabama overall, but in this rep, you’ll see he gets very high in his hand placement. In this exact same situation, if he bends just slightly better and gets lower overall his aiming point changes dramatically and you probably avoid any kind of holding, or hands to the face calls.

Next, you’ll see he isn’t going to ever really flash any kind of speed but in the next clip you’ll see as a puller, he brings a lot of weight on the move and he’s going to either clear out a monster hole, or he’s going to create an entire mess of bodies. Nice pull overall, I would just like to see him do it at a little faster speed.

The speed of NFL defensive linemen is going to have this kid in a whirlwind if he doesn’t learn to play quicker off the snap. In this clip you’ll see here at left tackle, he’s about a whole second slower off the ball than everyone else on the field. That could be disastrous if he plays left tackle in the NFL. That’s not going to be a mistake that goes unnoticed.

Darnell Wright’s game has such a low floor, but it feels initially that his game has an incredibly high ceiling as well. He won in different ways against opponents in different games, but his execution is going to have to become much more consistent. Lunging at defenders was something that hindered him slightly and against the faster rushers of the world like TJ Watt, that simply won’t do. He must learn to play faster, simply put. However, he has great strength that showed up in a multitude of ways. He isn’t going to throw guys out of the club consistently, but one glaring thing about his game is the guy knows where the ball is going, and he knows how to get himself between defenders and the ball carrier.

Physically he reminds me a lot of a guy like Trent Brown. A very long tall heavy tackle with massive limbs who’s going to learn to finish guys at the next level. Football is also a game of production and if he can get to a point where he’s holding top-tier guys like Will Anderson to three tackles a game and no sacks, that’s going to be enough to not only allow him to see more than one contract in this league but thrive and I think he could potentially become an average starter in the league at his position.