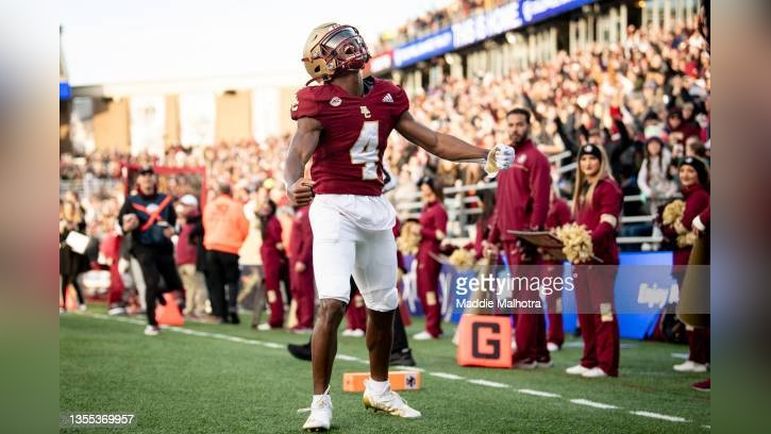 From now until the 2023 NFL Draft takes place, we hope to scout and create profiles for as many prospects as possible, examining their strengths, weaknesses, and what they can bring to an NFL franchise. These players could be potential top 10 picks, all the way down to Day 3 selections and priority undrafted free agents Today, we’ll be profiling Boston College WR Zay Flowers.

— Strong route runner who creates separation at top of his route, shows burst/explosion and ability to create space, good stair step to create space on over/crossing routes
— Tracks and finds the ball well in the air, especially on short/intermediate routes
— Plays bigger than size, feisty and aggressive and mixes it up as a blocker, able to make contested grabs in traffic
— Versatile, lined up all over the field, worked inside/out and in receiver run game
— Runs diverse route tree at every level, won’t be uncomfortable with any concept at next level
— Good YAC threat, quick to tuck and gets upfield immediately after making the catch
— Runs tougher and bigger than size, not overpowering but doesn’t go down on first contact, fights hard for extra yards
— Quick player, able to make defenders miss in open field
— Came up big late in games and against top opponents
— Had strong senior year, productive player despite subpar QB play
— Appears to be high-character person and good fit in locker room

— Small frame, short and listed at really lightweight
— Lacks elite top-end speed successful prospects of his build possess, looks like low 4.4 speed
— Works hard to adjust to passes but lacks size and has trouble consistently catching outside his frame, many missed chances on passes that went off his hands or slightly missed out in front downfield, doesn’t have large catch radius
— Didn’t face much press coverage and struggled against bump when he did see it
— Hands aren’t awful but dropped nine passes as a senior
— Needs to work harder to get into QB’s vision, find soft spot in scramble drills
— Will have size limitations as a blocker
— Tall and stiff/upright stance
— Slightly older than typical prospect and game feels maxed out
— Doesn’t have return value

Flowers is my first draft profile of the season. An exciting player on a less-than-exciting offense, Flowers isn’t big but he’s explosive. He does a good job to create separation at all levels but is especially potent on two routes. Comebacks and overs/benders. His ability to create space at the top of his route on those concepts is excellent. Here are examples of each.

He’s a good athlete that’s twitchy and can separate with good speed. He’s also a solid YAC threat who quickly gets upfield after the catch, able to do damage on short and intermediate crossing routes.

He’s also willing to mix it up as a blocker. Despite his smaller size, Flowers is physical and aggressive and seeks out contact. Watch the scraps here along with cracking this safety to create the hole for the running back to get into the end zone.

Flowers is certainly a fast guy but how fast is my question. Given his light-listed weight of just over 170 pounds, though he may be heavier than that by the time he weighs in at this year’s Shrine Bowl and Combine. Since 2000, of the 44 Combine-invited receivers, 27.3% of them ran sub-4.4. Flowers seems a tick slower than that, a 4.42-4.44 type who certainly has speed but perhaps not that upper echelon-level guys of his size typically need to overcome their stature. As someone projected to be in the first-round conversation, perhaps in part to this being a “down” receiver class, a sub-180-pound receiver without A+ speed is a concern.

A small player, his catch radius is also limited. His hands aren’t terrible but he won’t make a ton of grabs outside of his frame. Passes that hit off his arms or ones he just can’t quite get to due to a lack of size and length. Some examples.

Still, Flowers is an easy guy to like for his salt-of-the-earth mentality and good tape. Specifically for Pittsburgh, I can see the Steelers having interest. Their need in the slot, Flowers’ versatility and work in the receiver run game, and some key connections. It’s worth noting Mike Tomlin’s son Dino transferred to Boston College for the 2022 season. One other key piece of Internet-sleuthing is that Tomlin attended at least one BC game this season – head coaches don’t get a lot of free weekends to go to colleges. We know it game it was too with Tomlin posting this photo of him attending the team’s September 3rd opener against Rutgers.

Dino didn’t record any stats that day. But Flowers? He sure did. Ten catches, 117 yards, and two touchdowns. I’m betting that caught Tomlin’s eye and was one of the few players he “scouted’ in-person this season. Flowers checks a lot of boxes personally and professionally for this team.

Big-picture. I like Flowers. He’s a good prospect. I don’t know if he’s a great one though and it’s hard for me to justify a top pick on a 5’10, 175-pound slot receiver who won’t be a focal point of an offense. He fits best in a motion-heavy offense that runs RPOs, allows him to work in space, that runs a ton of crossers to maximize his YAC ability and explosiveness at the top of his route. Offenses that run stacks and bunches to create free releases will also be a plus. My NFL comp to him is Darnell Mooney, a fine player but not an All-Star. Someone I’d consider later on Day Two but not with a top-dollar selection.

For the Steelers, this is someone I expect the team to show interest in, especially if Matt Canada remains as offensive coordinator.