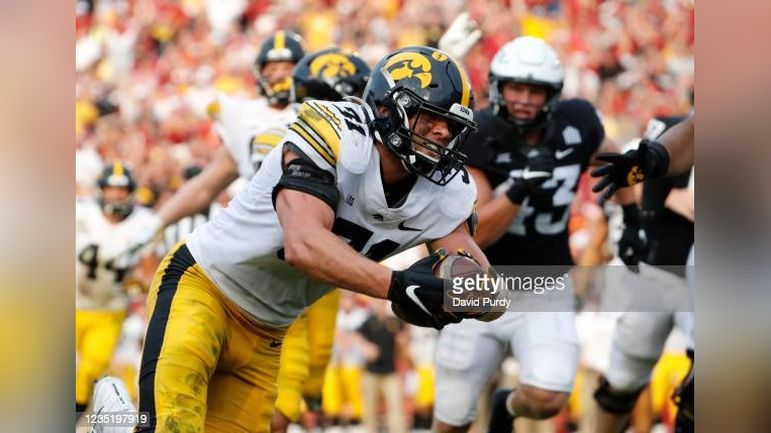 From now until the 2023 NFL Draft takes place, we hope to scout and create profiles for as many prospects as possible examining their strengths, weaknesses, and what they can bring to an NFL franchise. These players could be potential top 10 picks, all the way down to Day 3 selections, and priority undrafted free agents. Today we’re profiling Iowa LB Jack Campbell.

— Very good sideline-to-sideline tackler, uses great effort in pursuit
— Light on his feet for a 6’5 off-ball linebacker, always pumping his feet, active and energetic
— Floats around in zone coverage very well, covers a lot of ground
— Quick to diagnose plays and schemes
— Quickly recovers against play action, avoids getting sucked into the run.
— Has great eyes at that position, consistently scanning the field in the pass, being aware of check downs, crossers, etc.
— Takes on blocks well in the run game, plus size helps him defeat blocks
— Doesn’t give himself up to blockers, good at keeping a free hand while engaged, allowing himself to get lateral to the line of scrimmage in chasing the football.
— Excels at getting his hands on tight ends and running backs, redirecting routes on those players in the core and in space
— Tall, long-armed linebacker that uses active hands in both the run and pass games, his frame and activity will benefit him greatly in the NFL in the middle of the field passing game.

— When diagnosing plays, prone to getting sucked too far into the line of scrimmage allowing blockers to engage and add him to piles of dirty laundry
— Lacks ideal natural straight-line speed needed for the position
— Allows and takes a lot of bait with pre-snap movement and motion that can cause him to be out of alignment.
— Doesn’t seem initially to have that raw athleticism to cover faster, more athletic players in man coverage.
— Below average bend and hip fluidity, which causes him trouble in scramble drills and/or play-action when QBs extend the play and change direction.
— Lacks moves to defeat blocks, can struggle to take on pullers in an alley, needs to improve hand usage to shed blocks quicker

— Senior, born 8/22/2000
— Enterprise Leadership Major
— Named to Des Moines Register Elite 8 and All-Iowa Elite All-State as a Senior
— Played in 11 games as a Freshman but only recorded five tackles
— Was named Academic All-Big Ten, while seeing action in the final five games, recording 29 tackles, 4.5 tackles for loss, and one sack
— In his junior season against Colorado State, he recorded a career-high 18 tackles, also recovered a fumble that led to the game-tying score in the third quarter, and matched a career-high with three pass breakups.
— Three-time Dean’s list student (2021 spring, 2021 fall, 2022 spring)
— Ranked second in the Big-Ten with 143 stops as a senior with a Citrus Bowl number of 14 tackles, ranks fourth all-time in the bowl games history.

In the clip below, you catch Campbell very flat-footed at the snap and he doesn’t even move forward toward the football until at least a whole second or two after the snap, and for whatever reason, not only can you not get caught doing this on the collegiate level, but you can’t be doing that, especially at the professional level. Guys are way too fast and smart on the professional level to be getting caught flat-footed at the snap. For such a cerebral player, the lack of urgency and understanding just isn’t acceptable.

Here in this clip, check out how disciplined he is in staying square to the line of scrimmage. His eyes were absolutely locked onto the backfield and he stayed true to his linebacker rules. The level of seasoning it takes guys at that position, to learn a habit such as that is a truly cool thing to watch. He never turns his shoulders even slightly until the moment of impact. Now not so much in this play but had this happened in the open field and the guy turns his shoulders, all it takes is one hard cut and a ball carrier leaves him in the dust. Super smart guy that plays with great technique.

This is one of the more underrated clips I’ve come across in my scouting of Campbell. In this play, you’ll notice that in the play action, the running back comes through on a sort of swing route and all the receivers run vertical routes with some bending toward the middle of the field. Campbell notices in his drop that as the play develops, no targets are running across his face so he takes his drop about as vertically as he can to create a more difficult throw for the quarterback. He knows that the quarterback’s only other option is to throw the check down to the running back, so he goes more vertical in his drop.

Here Iowa is backed up on the goal line, and Iowa State runs simple zone right, and Campbell’s eyes are in the wrong spot, so he slightly overruns the play allowing the Iowa State running back to put his foot in the ground and get north which puts him in the end zone. You see this a lot, but as a linebacker you can’t allow this to happen because, on the goal line, you are the last line of defense and you must be gap-sound. Force the ball carrier to the sideline and don’t allow the cutback. Make that back’s only option be to outrun the defense to the pylon. His eyes must remain in the backfield, but in this instance, he follows the offensive line which takes him too far horizontally.

Lastly, here you’ll see him in a deep zone just scanning the eyes of CJ Stroud, and just instinctually makes a great play on the football. Once again sees nothing in front of him, so just extends that drop just slightly and was able to use his long frame to make a play and get a hand on the football. This ability will greatly aid him in his professional career with this deep middle-of-the-field in-breaking routes and anything vertical with slot types or even tight ends. This area of his game was super fascinating mainly because in today’s game you see a lot of these smaller, quicker, more athletic types of off-ball linebackers and so seeing fewer guys of his stature and size is definitely a huge bonus being an every down guy, there in situations where teams are trying the middle of the field. It makes teams one-dimensional, and forces teams to try the sideline or even screen, bubble types of throw short-run long plays.

Through the tape and statistics, one major point I keep coming back to is that Campbell is just an old school, thumper, heat-seeking missile type of linebacker and that’s a great trait to have and Pittsburgh is looking to up the middle linebacker position after such a disappointing last two years. The Steelers would’ve loved to have seen Bush return to his rookie season self, but whether it has been because of his injury or whatever else it could possibly be, he just never returned to his old self. Jack is a sideline-to-sideline cat that just never quits on the football.

One of those stats that doesn’t show up on paper is his cleanup tackle ability. There are multiple situations where on a goal to go, or third and short situation he comes, and that second push or leg drive right there before the whistle blows keeps teams behind the marker and allows his offense the ball back. He is a violent player who has no motor questions and has a nose for the football but one thing I would like to see him improve in doing is using his hands. More specifically in the run game, there are many, many instances where he’s just inches away from making some big tackles if he would win the rep earlier and shed off blockers.

Being 6’5″ is also going to give him leverage in a lot of these one-on-one blocking situations, so there are a handful of very microscopic details about his game that could elevate him to a whole other level. He’s a high-character kid, that paid his dues at the University of Iowa and worked his way up the roster.

My player comparison for him has got to be the one and only Brian Urlacher. Not in skill-based conversation obviously, but in physique, since they are very similar. Weighty, hardnosed, run-thumping off-ball linebackers who just have a nose for where the football is.