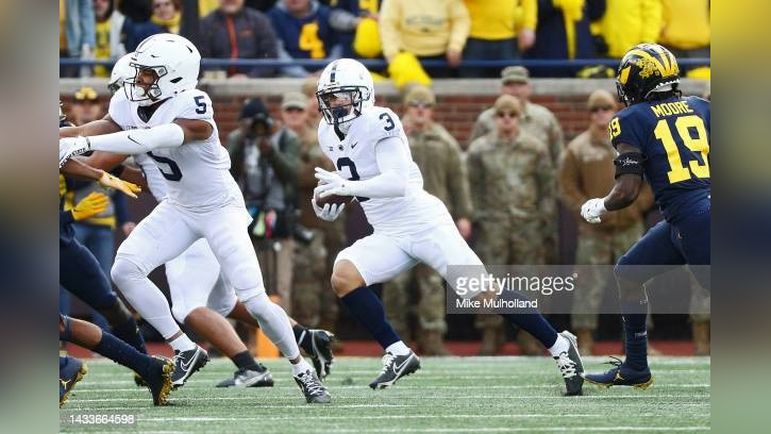 From now until the 2023 NFL Draft takes place, we hope to scout and create profiles for as many prospects as possible, examining their strengths, weaknesses, and what they can bring to an NFL franchise. These players could be potential top 10 picks, all the way down to Day 3 selections and priority undrafted free agents Today, we’ll be profiling Penn State WR Parker Washington.

— Compact frame, built like a running back, makes him difficult to bring down if you do not hit square and/or wrapped
— Great contact balance
— Elite ball skills
— Does a great job of playing above the rim and attacking the ball at its highest point – makes him a great threat for slot fades
— Has numerous examples of highlight reel one-handed catches
— Has strong hands and catches the ball away from his frame
— Can consistently make tough contested catches over the middle
— Digging out low throws is easy for him

— No elite athletic traits
— Suffered a season-ending injury in 2022 after game 10 – the injury was undisclosed
— Doesn’t show game-breaking speed or burst on tape, but would expect him to test well as many Penn State prospects do (if he does coming off injury)
— Not overly quick out of his breaks, hurts in route-running and after the catch
— Average foot agility getting in and out of breaks.
— Slow to get upfield after the catch
— Didn’t see much press coverage in the slot but struggled when defenders got hands-on down the field
— Needs work in scramble drill situations – do a better job of getting into QB’s vision
— Not a natural separator and lacks route running nuance that you’d expect from a three-year player in the slot
— Offers next to nothing as a blocker
— Has punt return experience, but had little success (5.5 yards avg.)

— Still only 20 years old, turns 21 in March 2023
— Listed as a sophomore due to COVID year, but is actually a three-year college player
— Played 32 games in his career and caught a pass in all of them
— 146 catches, 1920 receiving yards, 13.2 yards per catch, 12 receiving touchdowns in his career
— Returned punts in 2022 – 18 returns, 99 return yards, 5.5 yards avg.
— 2022 All-Big Ten Honorable Mention
— Finished 10th all-time in receptions and 13th all-time in receiving yards in Penn State history
— Four-star recruit from Richmond, Texas, chose Penn State over Wisconsin, Nebraska, and Utah among others
— Full name is Christopher Parker Washington
— Cousin is former Steelers QB, Joshua Dobbs
— Volunteered at Hearts of Kids Social Services and Balogun and James Foundation and has mentored foster kids
— Majoring in Recreation, Park, and Tourism management

Washington is my first draft profile of the 2023 draft season. He is profiled as a slot receiver at the next level with his short, compact frame that does a great job of absorbing contact and bouncing off tacklers. He doesn’t possess game-breaking speed or elite acceleration to help with his yards after the catch, but he does have great contact balance. If a defender doesn’t wrap or hit him square, Washington has the ability to run through it and make it a big play. Here are three examples of it against some of the top competition Penn State faced in Michigan, Ohio State, and Auburn.

Washington has a knack for making high-difficulty highlight catches. You may have seen him on SportsCenter’s Top Ten Plays at some point in the past three years as he could make a whole highlight tape of his one-handed catches.

In case you were curious, he is able to catch with two hands as well. He’s shown he’s not afraid to go and make tough catches across the middle of the field while taking a hit. The other thing I love about his game is catching passes all hands away from his frame. It was rare that I saw him let a ball get into his body. He’s comfortable and confident in his ability to catch the football.

There were a few concentration drops on screens, but it’s a rarity when it happens. Washington catches almost everything thrown to him and his stats back it up. Per SIS, in three full seasons, he’s only had eight career drops and his drop rate has decreased every season from 7.0% in 2020 to 5.6% in 2021 to an elite 2.0% in 2022. Those are the type of things that excite you when looking at the development of a player.

His best work comes when he’s given chances to play above the rim. It’s a bit surprising when talking about a 5’10” receiver, but Washington is great at going up and high-pointing passes. It will make him a dangerous threat for slot fades at the next level.

Washington is so good at catching in traffic that it’s almost like he doesn’t care as much to create real separation downfield. He is far from the route technician that you may expect from a player that was a mainstay in the slot for three seasons. He needs to work on being more detail oriented and work on the nuances of route-running if he wants to take the next step as a player.

He often doesn’t fully power down into his cuts and it causes them to not be as sharp and he drifts. This should be a sharp cut right down the 50-yard line. He fades two yards after his cut and makes this throw much more dangerous than it should have been. That type of discrepancy in the NFL will lead to interceptions.

For someone that is Washington’s size, you expect him to be more of a natural separator, but it was rare that you saw him routing anyone up. He doesn’t offer much at the top of his routes in terms of wiggle or misdirection and is average in and out of his breaks.

I think he can overcome his average burst if he adds more at the top of his routes to manipulate defenders’ leverage. However, that has yet to be seen right now and is causing him to have defensive backs in his hip pocket in most 1-on-1 situations.

There were times when Washington didn’t fully understand his leverage while running his routes. Here, on a deep over, he needs to break this off and flatten it out to create separation. Instead, he continues on his path upfield leaving the defensive back blanketing him. He finally breaks it off further down the field, but it’s far too late.

When you don’t have elite speed or burst, these are the types of things you have to know to succeed in the NFL. He has the potential to be a very good possession receiver with his ball skills but needs to clean up his game around the edges.

The other part of Washington’s game he needs to improve on is his blocking. It’s all but non-existent. He has a strong, compact body that should be able to handle his own in the running game, but he often looks disinterested or simply ducks his head and whiffs.

Overall, I think Washington has a place in the NFL but is a year or two out from having an opportunity to make a real impact. His elite ball skills can make up for his lack of size and top-tier speed but he will have a cap on his potential due to not being a natural separator. His route-running is my biggest concern right now and it will take time to develop against NFL-level defensive backs. He will have to survive simply through his contested catch ability. My current comparison for him coming out is Amari Rodgers with their running back-like, stout bodies and ability to bounce off tacklers. Everyone’s situation is different, but Washington possesses many of the same weaknesses coming out as Rodgers who hasn’t been able to find a consistent role yet in the NFL.

For the Steelers, I could see them having some interest in the in-state prospect as they desperately need to add talent in the slot. However, I wouldn’t want to use a day two pick on a slot WR who still has to learn much of the nuance and feel that it takes to play the position.