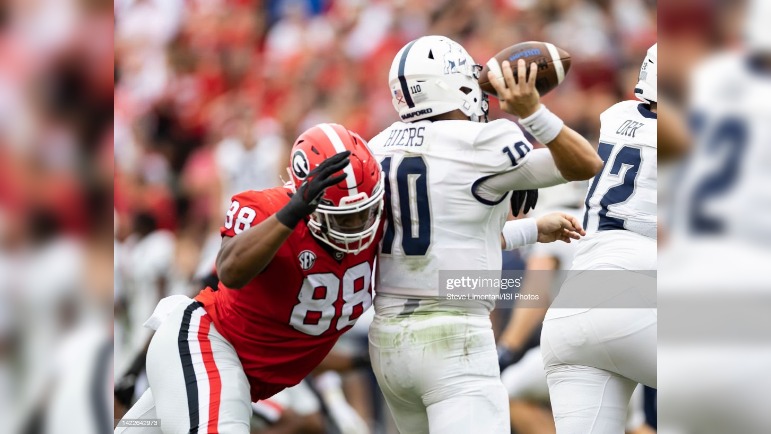 From now until the 2023 NFL Draft takes place, we hope to scout and create profiles for as many prospects as possible, examining their strengths, weaknesses, and what they can bring to an NFL franchise. These players could be potential top 10 picks, all the way down to Day 3 selections, and priority undrafted free agents. Today we’ll be profiling Georgia DL Jalen Carter.

— Uses violent hands frequently
— Has great motor and pursuit of the ball
— Long defender that keeps long arm free in run game to grab ball carriers
— Has great strength in shedding blockers
— Elite lateral speed when chasing runners east and west
— Rarely misses tackles when meeting runners in the backfield
— Great awareness when locating the football, and seems to always make an appearance around the ball
— Has an underrated collection of pass rush moves, including rip, swim, chop, and snatch moves
— Great position versatility playing anywhere from a 1 all the way up to a 5
— Really great knee bend for a player of his weight, while typically not seeing guys at that position being able to play so low

— Plays all too vertically at times exposing his torso to blockers, making getting leverage easier for blockers
— Frequently gets surprised by double teams and gets washed easily
— Missed five total games in 2022 due to MCL injury
— Would like to see more forward lean in his stance, plays very high coming directly off the snap
— Arms and legs die easily in pass rush, when initially losing the rep before chasing the ball after the pass
— Lacked the elite number of sacks in his time at UGA that you would like to see out of a potential top-five pick
— Wastes precious seconds between leaving his stance and engaging with pass protectors

— Junior prospect from Apopka, FL
— Ranked the no. 9 player in the state of Florida and the no. 49 player nationally according to Rivals.com
— Learning Design and Technology major
— 2022 Associated Press and Coaches’ All-SEC First Team
— 2022 Finalist for the Rotary Lombardi Award as the nation’s top lineman
— 2022 Preseason All-America First Team by Associated Press and the Walter Camp Football
— 2022 Preseason watch lists for the Lott Trophy, Outland Trophy, and Bronco Nagurski Trophy
— PFF’s Highest graded defender in all the power five
— In 2020 played in all 10 games, while starting VS. Florida and South Carolina
— Coaches’ All-SEC second team as a sophomore, finishing with 37 tackles, 33 QB pressures, three sacks, 8.5 TFL, and blocked 2 kicks
— All-SEC First team as a junior racking up 29 tackles, 25 QB hurries, and three sacks
— Suffered an MCL injury in 2022 causing him to miss five games

When you break down the tape of Carter, one of the more notable things that will jump off the screen is his raw power. He’s a super strong guy that uses his hands well, but objectively, his strength is buying him some time in a way. His strength is really his strong suit right now because he’s a guy that plays way too high. His pad level has really got to improve, especially in the run game. In college, he dominated in pass pro and one on one drive blocks, but in double-team situations it typically got him in trouble. Now, his game has its areas to be worked on, but the hype is warranted. This guy is insane when he wants to be. Now I believe his next step is to channel that inner monster and bring overall consistency to his game.

In the upcoming play initially has a great get-off, and just a powerful first step. However, as stated previously he meets more than one blocker, and he allows his feet to die. He has the talent and overall raw athletic ability to beat some of these blocks in pass pro, but he absolutely must play to his capabilities. The effort is in question on this play, but that’s the overall knock in this circumstance, that he must finish some of these rushes.

Here once again we’re back to pad level and get off. Carter’s get-off can be unbelievable, but in way too many instances he’s caught popping straight up out of his stance and ending up like he does in this play, four yards in front of the line of scrimmage.

His absolute game-wrecking ability speaks for itself, not necessarily in the stat sheet but he can absolutely create a mountain of bodies when it comes to get-off and the way he attacks bodies, but that can also be a negative. Here against Kentucky, you see him come off and shock the blocker with his ridiculous strength, but his eyes are not focused on the ball carrier and he completely disregards chasing the ball. He doesn’t even lay eyes on him until late in the play. You’d really like to see his awareness improve going into the next level.

The numbers in his statistics aren’t just going to jump off the tape at you, but one thing that he is going to do is get tackles for loss. In this play against Kentucky, he initially uses a really good swim move to make the blocker miss and finishes by making a great play in the backfield. He uses quick hands and the level of technique he plays with is really refreshing to see. The ability to shed blocks combined with the speed to chase down plays and tackle guys so far away from the line of scrimmage sometimes is super impressive to see from such a young guy.

One of the few concerning points in Carter’s game is overall production. He only recorded six career sacks in his three-year stint at Georgia, but with one being here, there’s not a lot to critique honestly. He flashes off the ball, makes good contact off the snap, uses a good rush move, and pursues the ball well to finish the sack here. With a very big frame and long arms, he uses great extension and sheds the block to make one of his few sacks.

One of the desirable traits you search for at this position outside of, obviously pass rushing ability and run-stopping, is just an overall ability to cause havoc without being recorded for the tackle. In the play below, he battles against fellow up-and-coming first-rounder, O’Cyrus Torrence and he just pushes the pocket way out of whack causing the QB to have to leave the pocket early creating a much more difficult throw. This is a very underrated trait for his position that opens up so many more plays for other guys. This can cause a lot of game-changing plays when it comes to flipping the field and getting teams behind the chains.

Jalen Carter is such an interesting prospect to be looking for, for a handful of different reasons. The sky is the absolute limit for such a guy and his ceiling is potentially as high as anyone in his draft class, if not higher. Although I must say, I’m not as high on Carter as I was when starting my research. As flashy as he is and as talented as he is, the MCL issue that caused him to miss games at UGA is a big red flag. That’s something teams are going to want to address. It concerns me with his lack of ability to bend/ stop and go that NFL guys are going to wash him way down the line of scrimmage in the run game.

One area that this position seems to be flashing more and more in today’s game is the ability to get hands up in the passing game, Unfortunately, that isn’t something his game includes. Carter will still likely be a top three to five pick, but I personally think his value isn’t exactly what scouts and coaches may think. Being an underclassman, he’s going to be more of a project than what some teams may be initially thinking, but as I said before his ceiling is incredibly high. The “could be” is astronomical with him especially if he learns to better place his body in runs containing double teams, and he can end up getting more production in the pass-rushing part of his game. The intrigue is out of this world and I can’t wait to see what Carter’s career ends up looking like.