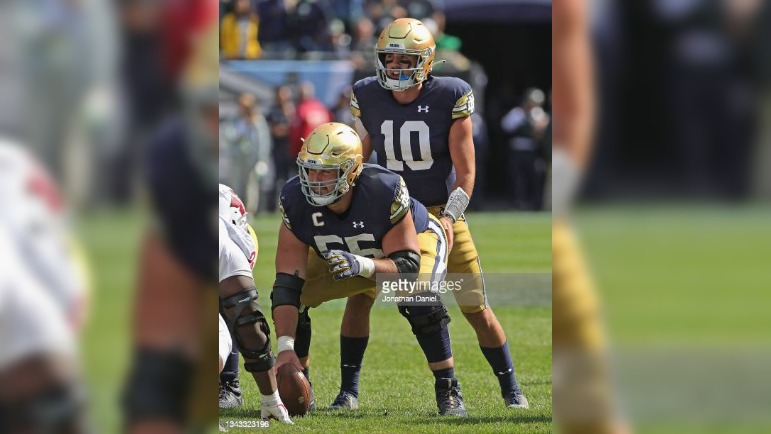 From now until the 2023 NFL Draft takes place, we hope to scout and create profiles for as many prospects as possible, examining their strengths, weaknesses, and what they can bring to an NFL franchise. These players could be potential top 10 picks, all the way down to Day 3 selections and priority undrafted free agents Today, I’ll be profiling Notre Dame IOL Jarrett Patterson.

— Possesses good size and height for the position (6’4, 310lb)
— Experienced blocker, logging 50 starts in four seasons
— Versatile having starting experience at both guard and center
— Smart, effective pass protector that never allowed a sack in four seasons
— Plays with good anchor, having solid knee and hip bend to sit in against the rush
— Digs his heels into the ground and will get extended to stall the defender’s pass rush
— Does a good job picking up stunts and twists up front
— Can combo with the C/OT up to the linebacker, springing the runner into the second level of the defense
— Drives his legs hard in the running game, looking to generate a push off the LOS
— When he stays engaged, will block to and through the whistle

— Limited as an athlete when it comes to explosiveness and power
— Lacks lateral movement skills to match speed and pick up blocks in space
— Will fall off blocks occasionally due to poor hand placement/overrunning the defender
— Hands can get outside defender’s frame at times due to poor foot speed
— Lack of mobility will make playing in space difficult at the next level against faster, more dynamic defenders
— Lacks raw strength and power to displace larger, stronger interior defenders alone

— Redshirt Senior Prospect from Laguna Hills, CA
— Born September 9, 1999 (age 23)
— Former OT recruit out of Mission Viejo HS, earning all-state honors as a prep athlete
— Appeared in three games over the course of the season in 2018, redshirting as a true freshman
— Started all 13 games at center in 2019, not allowing a sack and just two QB hits on 854 offensive snaps played
— Started all 12 games at center in 2020, helping the team make the CFP Semifinals against Alabama
— Played and started in all 13 games for the Irish at center, didn’t allow a sack and helped the Irish average 143 rushing yards per game
— Started and played in 12 of the final 13 games in 2022 after missing the season-opening game at Ohio State
— Made the transition to left guard for his final season at Notre Dame
— Allowed zero sacks in 1,688 pass-blocking snaps in his career at Notre Dame
— Two-time team captain (2021 & 2022)
— AFCA All-American – Second Team, 2021 Phil Steele All-American Third Team, 2021 Phil Steele All-Independent First Team, 2020 Phil Steele Honorable Mention All-America, 2020 Phil Steele Preseason All-Independent Second Team

Jarrett Patterson is a battle-tested offensive lineman that played for the Notre Dame Fighting Irish the last four seasons, logging 38 starts at center and another 12 at LG in 2022 after missing time in spring ball due to a torn pec that he has since fully recovered from. Patterson was a former OT recruit out of high school and his ability to play both center and guard at a high level in college speaks to the redshirt senior’s ability to play various spots along the offensive line. He enters the league with ample starting experience (50 starts) as well as the technical work to contribute early in his career.

When you watch Patterson on tape, it is quickly recognizable that Patterson is a sound pass protector, showcasing a stout anchor and groomed technique as he would neutralize the opposing pass rush. On this rep, we see Patterson pick up a blitzing LB, latching onto his chest, and does the defender the service of suplexing him into the turf after he attempts to bat the pass at the LOS. Patterson proceeds to finish on top of the LB for the pancake block.

In fact, on 1,688 pass-blocking reps in his college career, Patterson has never been charged with a sack according to Pro Football Focus. On this pass protection rep, we see Patterson play with a wide stance, having good knee and hip bend to sit in against the rush as he digs his heels in to avoid giving ground. He gets a good punch inside the defender’s torso and mirrors the pass rusher throughout the entire rep, giving the defensive lineman no shot to get any penetration as Pyne finds his man downfield for the score.

Patterson is a smart, instinctive blocker that plays with great awareness in pass protection. He does a good job picking up twists and stunts upfront as you can see in the examples below, getting a chip on the defensive lineman while being able to pick up the defender looping in to keep the QB clean in the pocket.

Notre Dame executes a ton of combo blocks in their running blocking scheme, and Patterson was often part of the combo the offense ran behind in those situations. Look at these clips as Patterson combo blocks the defensive lineman until he works off the block to pick up the linebacker at the next level. You see some technical issues like how he drops his head in the first clip or how his hands get outside the defender’s frame in the second clip, but Patterson manages to get the block on both plays, helping the offense pick up solid yardage on both runs into the second level of the defense.

While it was his first season playing guard for Notre Dame, Jarrett Patterson showed he is a capable puller when asked to get on the move and get a body on a man on the opposite end of the LOS. Here are two clips showcasing Patterson on the move, pulling from left to right while getting crucial blocks to spring the running back into the secondary on both runs.

Still, Patterson isn’t the greatest athlete along the offensive line as he tends to struggle with foot quickness and working in space. We saw in the clip above against the Trojans of the defender working off the block, having his arms extended outside his frame which would likely be a penalty in the NFL. Watch this missed pull by Patterson against UNLV where shuffle his feet and overrun the block, having the defender run past his inside shoulder, leaving him reaching to try and get a hand on the defender who pressures the BQ and forces him to scramble out of bounds.

While Patterson plays with good leg drive and looks to finish running plays to the whistle, his initial punch is lacking in terms of strength and power. There are instances like this play against USC where he whiffs on his punch, allowing the defender to quickly disengage the block and get in on the tackle.

Patterson can climb to the second level and work in space, but he isn’t the most fluid athlete. Here against the Trojans, we see Patterson play with his shoulders over his feet, leading to him ducking his head and lunging forward as the defender easily sidesteps him to make the tackle on second-and-short, forcing third down.

Overall, Jarrett Patterson is a steady, experienced blocker that has been a relied-upon member of the Notre Dame offensive line. His resume as a pass protector speaks for itself and he has shown the ability to pull at guard, making him a good fit for power/gap-blocking schemes. His lack of functional athleticism limits his upside as he won’t consistently pick up blocks out in space, and his functional strength and leverage will be put to the test at the next level against powerful, athletic interior rushers.

When watching Patterson play, Cody Whitehair of the Chicago Bears came to mind as a positional/role fit at the next level. Whitehair is more athletic than Patterson, But Whitehair also has shown positional versatility, having played OT in college, but has played both center and guard in the league. Whitehair is a capable run blocker, also doing well on combo blocks like Patterson, although Patterson is a better pass protector coming out.

Patterson should look to get drafted somewhere on Day Two or Early Day Three as a high-floor/low-ceiling player. He isn’t going to wow you with his functional athleticism, and he may have some limitations, but he has the positional flexibility to play any of the interior positions at a more than respectable level. The Pittsburgh Steelers could use depth on the offensive line and potentially a new starting LG with Kevin Dotson’s frustrations regarding his consistency. Patterson could come in as a middle-round selection to battle Dotson for the starting spot, a more reliable floor, albeit with less upside. In conclusion, Jarrett Patterson should be a player that can be a capable starter or a high-level backup on the offensive line’s interior.