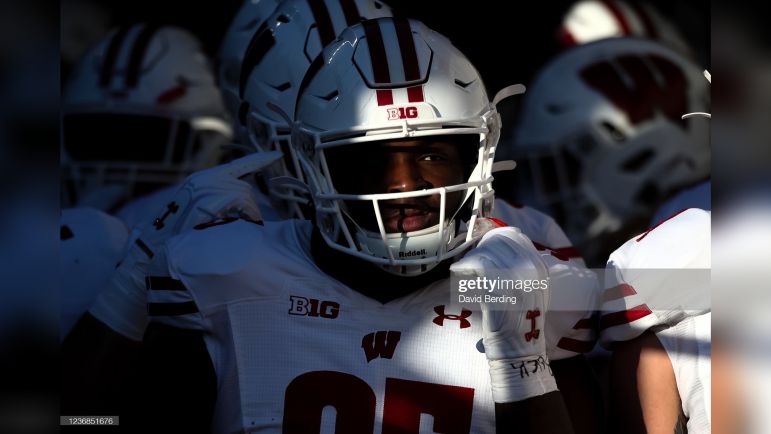 From now until the 2023 NFL Draft takes place, we hope to scout and create profiles for as many prospects as possible, examining their strengths, weaknesses, and what they can bring to an NFL franchise. These players could be potential top 10 picks, all the way down to Day 3 selections and priority undrafted free agents Today, we’ll be profiling Wisconsin DT Keeanu Benton.

— Great size and length, big and powerful lower half and looks the part
— Strong and controls base/solo blocks in run game, forces backs to adjust their path
— Flows down the line well and difficult to consistently reach and cut-off
— Plays with good leverage and hand placement, taller in the middle get doesn’t get uprighted
— Tackles and finishes well, finds the ball well with proper technique
— NFL system, played head up, used in even fronts and run/pass stunts, defense used pro concepts
— Surprising amount of bend and ability to corner as a pass rusher
— Flashes effective swim move as a pass rusher
— Gets hands up in throwing lanes
— Shows decent effort to chase the ball
— Tough player who fights through injuries
— Improved and had statistically best season as a senior

— Average snap off the ball, isn’t poor but not explosive, especially as a pass rusher
— Not a tremendous athlete who lacks foot speed in space
— Lacks go-to pass rush move he’s able to find consistently, gets locked up and doesn’t offer much if initial rush dies
— Surprisingly lacks effective bull rush to collapse the pocket, tries to be too finesse
— Needs to consistently stay on his feet, can get knocked off balance and drop eyes, causing him to lose battles and play with poor technique
— Will try to turn and wash out double-teams but still needs to consistently stay square and anchor
— May not have consistent pass rush presence to be all-situations player
— Didn’t have overwhelming production

If the Steelers are looking to upgrade their defensive line, Keeanu Benton sure looks the part. In this era of smaller and quicker defensive lineman who don’t fit Pittsburgh’s mold, Benton looks like he’s out of central casting. 6’4, 317 with reported 34 inch arms, he fits the body type this team looks for.

On tape, he’s strong and is able to hold the point of attack with great strength. Against solo blocks, he’s tough to block and he can blow up zone schemes too, difficult to reach and cutoff with his strength and length. Double-teams are needed to be able to generate movement on him. Some examples of him making plays against the run and Benton is a finisher.

While he’s not a supreme pass rusher, he shows the ability to bend and finish that I didn’t expect. Two examples here.

Keeanu Benton, this time from head on 0 tech. Flahses a nice move with the chop/spin, doesn't really go anywhere. Is able to dip the linemans side, go low and make a shoe string tackle for a sack pic.twitter.com/Gwl9StG4rk

The Wisconsin defense he played in, coached by Jim Leonard, was pro-style. He was a true zero technique on many snaps in a 3-4 front that asked him to run stunt and loop around to contain in the pass game. Like Isaiahh Loudermilk, the concepts run there will be run in Pittsburgh.

Benton lacks foot speed to make a lot of plays in space or chasedown quarterbacks if he can’t get hands on them before they leave the pocket. He flashes as a pass rusher but uses more finesse moves to get around than go through and his bull isn’t as effective as you’d expect. He often stalls out if he can’t win initially, especially if he’s rushing with power.

He also has to show more consistent technique in the run game. Not dropping his eyes on contact, especially double-teams and giving ground.

Overall, Benton is an impressive run-stuffer who checks the boxes Pittsburgh looks for. The size/length/strength coupled with the pro scheme he played in makes him a hard guy to find and tough player to ignore. There’s questions about his upside and how much he’ll truly be able to impact the passing game but he’s not just a plugger who can’t make splash plays.

A solid prospect who can play nose with the size and length to move down the line, too. Benton can fit in a 3-4 or 4-3 that two-gaps more than most defenses and wants their lineman to take on blocks and clog up run lanes to free up the linebackers behind. He’s used to running more complex schemes and assignments so a defense that is more aggressive and asks more out of their lineman than just shooting gaps isn’t too big for him. But the team will need good EDGE rushers/defensive ends so they’re not pinning their pass rush hopes on Benton along the interior. Teams who have bigger DEs who can push the pocket is ideal since Benton struggles to collapse and force the QB to escape.

He is someone I’d expect assistant GM Andy Weidl to really like, he likes mentally tough (he gutted out an ankle injury against Michigan State in 2022, Iowa 2021) and physically strong in the trenches, and a name to monitor on Day Two of the draft. Reminds me of Dalvin Tomlinson, another great high school wrestler who played in a NFL-like scheme under great coaching with similar measurables.