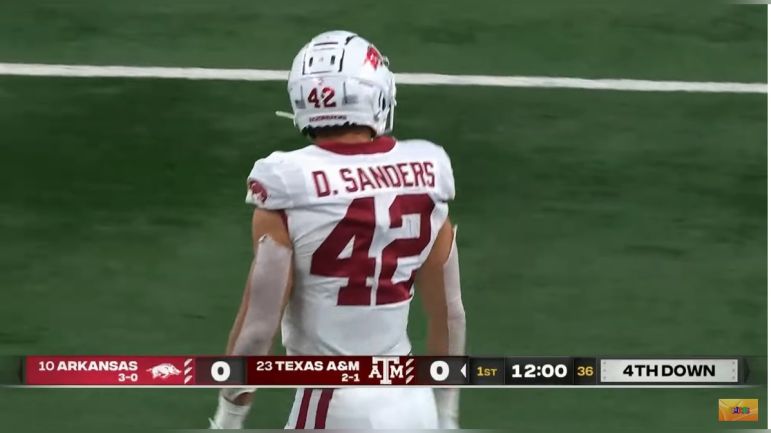 From now until the 2023 NFL Draft takes place, we hope to scout and create profiles for as many prospects as possible, examining their strengths, weaknesses, and what they can bring to an NFL franchise. These players could be potential top 10 picks, all the way down to Day 3 selections and priority undrafted free agents. Today, we will be profiling Arkansas LB Drew Sanders.

— Room on his frame to add bulk

— One season at inside linebacker
— Adequate processing the ball through the mesh point
— Use of hands taking on blocks
— Gets flatfooted in Zone coverage
— Not a lot of experience in Man coverage; carrying TE’s downfield
— Focuses on the QB in Zone missing receivers through his Zone
— Scheme had him attacking gaps more than reading blocks
— Will overrun swing passes

Sanders is your modern day linebacker. He has the size, speed, length and demeanor to be disruptive and productive on all downs. He was recruited as an Edge player but after transferring to Arkansas he moved inside. The Razorbacks ran essentially a Dime defense most of the time with just two linebackers on the field.

In their scheme, he was used to attack gaps and play downhill. This limited his production a bit but he still ended up with over 100 tackles. When allowed to read and process he showed good patience to not overrun the ball, stayed square to the line of scrimmage, took on blocks properly to squeeze gaps and finished plays by driving through the ball. He is a strong tackler using his speed and length well to corral runners from sideline to sideline.

Vs Missouri State, we will start with a nice physical tackle. Sanders (42) stays square, scrapes along the line and then plants the running back.

Vs Mississippi, he does a nice job with leverage taking on the left guard to squeeze the gap and get off of make the tackle.

In the passing game, he played a dual role used both in coverage and to rush off the edge. Against the pass, he was primarily used in Zone coverage in the middle of the field. With his size he has the potential to be difficult to throw around in the middle of the field. He reads the quarterbacks eyes well and will move with him. If the ball leaves the pocket, he has the closing speed to chase down most quarterbacks. He can reroute runners, close on the ball quickly and is solid reading screens.

Vs South Carolina, here are a couple plays in coverage. First a big hit on the shallow cross followed by hustling to the outside preventing a completion on a swing pass in the red zone.

Vs Alabama, he displays his closing speed from coverage to chase down the scrambling quarterback.

Vs Mississippi, here is his lone interception. He displays good hands reading the quarterbacks eyes getting in the throwing lane.

Any defense that grabs him will have the added bonus to use him on the edge. He aligned mainly on his feet but occasionally with his hand in the dirt. He showed success with a number of moves including an inside spin, swim, stab and bull rush. I saw one coffeehouse stunt when rushing inside where he fakes like he is going in coverage before turning back to rush the passer. They also used him to loop inside and has shown good bend around the edge. With a creative defensive coordinator he is going to be valuable piece on a defense.

Vs Cincinnati, from the right edge he will swim inside left tackle, run through the running back to get the sack.

Vs South Carolina, he reads the play, changes direction and again shows his closing speed to take down the quarterback.

Areas to improve include block destruction. There were several plays where he allowed hands to his chest and wasn’t allowed to get off the block. He can use his hands its more about consistency. Due to scheme and lack of experience off the ball there is room to grow in reading the mesh point on running plays. He will chase the fake or pulling blocker rather than following the ball. When attacking the ball carrier he will choose the first open gap he sees rather than the correct gap. This leaves him behind and out of the play.

At LSU, here are a couple examples of him not hitting the right hole. He is the linebacker to the wide side and will run into the pile rather than keying the running back. This could be part of the scheme for him to just attack a certain gap but it I wanted to show it anyway.

In coverage, he gets flatfooted in Zone. Instead of getting depth or even staying on his toes he remains in the same spot. His focus would remain on the quarterback without trying to disrupt the receivers going through his zone. On swing passes, he will get too deep with his angle and overrun the play. I didn’t see a lot of experience in Man coverage down the field. I would suspect with his athletic ability he should be able to handle it.

As I said at the beginning, Sanders is the modern day linebacker. A player that doesn’t have to come off the field in sub-packages. He has the added advantage of being able to rush off the edge as well. He has a high motor and will chase the ball on every play. I’ve seen him make plays 20-25 yards downfield after blitzing on the play.

He only has one year at the inside linebacker position but he has taken to it well. Coach him up a bit he’ll just get better. He could fit in a one or two gap schemes but if you have defensive lineman that can keep him clean he will make plays all over the field. Put him in on passing downs with T.J. Watt and Alex Highsmith and you have a formidable trio.

The inexperience is there but he has shown enough to make me believe he will continue to improve quickly. There is room on his frame to add some weight. He has work to do on using his hands to get off blocks. Man coverage is a question but he should be able to handle it.

For Pittsburgh he should be able to win a job inside quickly if not immediately. The versatility he could provide to a defense could cause problems for opposing offenses. Several linebackers in recent years have caught my eye with similar builds and starting experience including Quay Walker and Jamin Davis. Is he worth a first round pick like those players? Yes, he is. The team could go several ways with the first round pick and Sanders should be under consideration. Or maybe a possible move up with the 32nd pick.

Games Watched: 2022 – Vs South Carolina, Vs Alabama, At Auburn, Vs LSU, Vs Mississippi