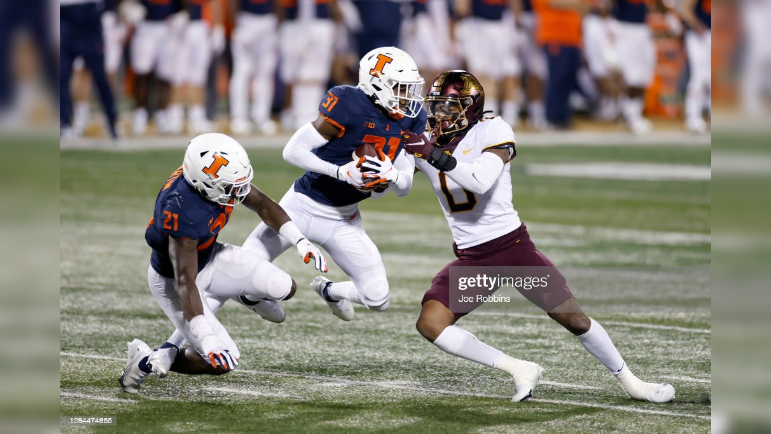 From now until the 2023 NFL Draft takes place, we hope to scout and create profiles for as many prospects as possible, examining their strengths, weaknesses, and what they can bring to an NFL franchise. These players could be potential top 10 picks, all the way down to Day 3 selections and priority undrafted free agents. Today, I’ll be profiling Illinois cornerback Devon Witherspoon.

-Tenacious player overall; has a real edge to his game mentally and physically
-Sound, violent tackler with good initial strength at strike point and good form
-Loves to stick his face in the fire working downhill
-Possesses great change of direction abilities; able to recover quickly in coverage
-Good click-and-close on tape, drives through the catch point to make a play
-Finds the football at a high level and does well to play through receiver’s hands at catch point
-Very comfortable working on an island in man coverage; confidence not an issue at all
-Smooth backpedal with clean footwork overall

-Edge he plays with led to a high number of penalties in 2022 (11 total)
-Can get caught on double and sometimes triple moves due to aggressive mindset trying to jump routes
-Frame appears maxed out overall; has some concerns about size at next level, especially weight
-Arm length measurement will be huge for Witherspoon’s future role in NFL
-Struggles at times with bigger, physical receivers that can out muscle him at top of routes and at catch point
-Long speed is average; Does a good job staying on top of receivers overall, but wasn’t really tested with NFL speed
-Might be a slot-only guy at the next level with size and speed questions
-Tends to let eyes lock into the backfield for too long and can lose receivers

-Winner of the 2022 Jim Thorpe Award as the nation’s best defensive back; first-ever Thorpe Award winner in Illinois history
-Consensus First-Team All-American; first-ever defensive back to do so in Illinois history
-Named the Big Ten’s Tatum-Woodson Defensive Back of the Year
-Allowed just a 33.8% completion percentage when targeted by quarterbacks in 2022, best in the nation
-Broke up 17 passes in 2022, good for sixth in the country
-Allowed less than 35 yards receiving in 11 of 12 games in 2022 for the Fighting Illini
-Played in 42 career games at Illinois, starting 32
-Finished four-year career with 159 total tackles, 11.5 tackles for loss, one sack, five interceptions, 30 passes defensed, one forced fumble, and three fumble recoveries
-Was the leading special teams tackler at Illinois as a freshman in 2019
-Former 0-star recruit after not playing football until junior year of high school
-Originally committed to Hutchinson Community College in Kansas before signing with Illinois in July 2019, just four days before training camp
-Former three-sport athlete in high school (football, basketball and track)

To be a successful cornerback in the NFL, one has to have an abundance of confidence, play with a clear edge and swagger, and be able to hold his own as a run defender. Look no further than Illinois star cornerback Devon Witherspoon as the ideal cornerback entering the NFL as part of a loaded cornerback class for the 2023 NFL Draft.

A former 0-star recruit that signed with Illinois just four days before fall training camp in July 2019, Witherspoon developed into the best cornerback in the nation as a senior, winning the Thorpe Award and the Big Ten’s Tatum-Woodson Defensive Back of the Year award, putting together a rather impressive curtain call season for the Fighting Illini.

Though slightly undersized at 5’11”, 180 pounds, Witherspoon plays like a man much larger and stronger than his frame would suggest.

A freight train working downhill against the run, he packs a serious punch as a tackler, playing with that clear chip on his shoulder, wanting to let everyone in his path know what he brings to the table on a down-to-down basis.

The thing that jumps out immediately on tape with Witherspoon is his overall physicality and quick processing skills.

Here against Indiana last season on the first defensive play of the game, Witherspoon is shot out of a cannon coming downhill, blowing up the swing route to the running back out of the backfield, all due to his processing and recall skills from tape study. The technique at the point of contact is sound too as he avoids contact with the head, leading with his shoulder to blow up the play.

Witherspoon gives a real jolt to his team when he makes plays like this working downhill. It wasn’t a one-off either with him.

Witherspoon may have a smaller stature, but he plays big overall and loves to mix it up and lay the wood to opponents.

He does a great job here against Michigan working downhill, avoiding the kick-out block from the pulling tight end by dipping underneath it and generating a ton of force striking up through the Michigan running back for the huge tackle for loss. To be a successful every-down cornerback in the NFL, one that slides in an out between the boundary and the slot, you have to be able to make these plays.

Witherspoon loves to stick his face into the fire in these instances and make plays. Huge plus for him.

It’s not just behind the line of scrimmage either. He’ll thump you on the perimeter too.

This is a terrific job by him on the boundary, using the swim move to defeat the block from the wide receiver, then sticking his foot in the ground to fire downhill to close in on the running back breaking into space. Look at the way he drives him backwards at the point of contact, too.

He might be undersized, but with great technique and a real willingness to work downhill and strike people he’s going to catch a ton of attention at the next level as a run defender.

Make no mistake about it though: Witherspoon is going to make his career in coverage.

He’s an aggressive coverage cornerback, one that lived on an island for the top-ranked defense in the country in 2022. Illinois played man coverage 75% of the time last season, and that’s a huge testament to Witherspoon’s abilities.

He can handle the boundary or the slot and really does a great job of staying on top of routes in his backpedal, very rarely losing, which allows him to turn and find the football.

In the slot here against Wyoming to open the season, Witherspoon does a great job of opening his hips but staying on top of the route, using the sideline as an extra defender, making the throw a tough one. He does fantastic work getting his head around to find the football and then high points it for the pick.

Witherspoon is slippery in space with the football in his hands, too, which will make him a dangerous player on turnovers when he gets his hands on the football. He can change games in the blink of an eye.

While he is overaggressive at times in coverage and tries to jump routes often, he has great footwork overall and elite-level change of direction skills, which allows him to recover quickly and get back in phase, even when he gets beat.

Bottom of the screen here against Indiana last season. See how he bites on the double move but wastes no movement recovering? You can’t teach that. A better ball likely bats him, but just being able to recover like that in a flash is a huge positive for Witherspoon moving forward in his football career.

Even if he doesn’t land in a man-heavy scheme in the NFL, he has the instincts and the overall range to thrive in zone coverage too.

Having that overall feel and being able to read the quarterback’s eyes to take him to the football is fantastic stuff, especially in the red zone.

There’s a risk there leaving the flat defender wide open, but he trusted his eyes and his instincts to get to the football and make a play. You can’t teach that; guys just come with it or they don’t. He has it and going to be a good one for a long time.

Overall, I am very high on Devon Witherspoon in this draft class. He’s absolutely in the discussion for the top cornerback in the class for me.

He’s a physical defender that is a tone setter for the defensive unit, loves to play on an island in man coverage and can truly take away half the field in coverage. While there are concerns about his overall frame being maxed out and his overall top speed, the chip he plays with and the background he comes from being a former 0-star recruit will continue to drive him at the next level.

Witherspoon profiles as a plug-and-play starter right away, whether that’s in the slot or on the boundary in a man-heavy or zone scheme. It wouldn’t shock me to see him reach the Pro Bowl in his first season in the NFL, either.