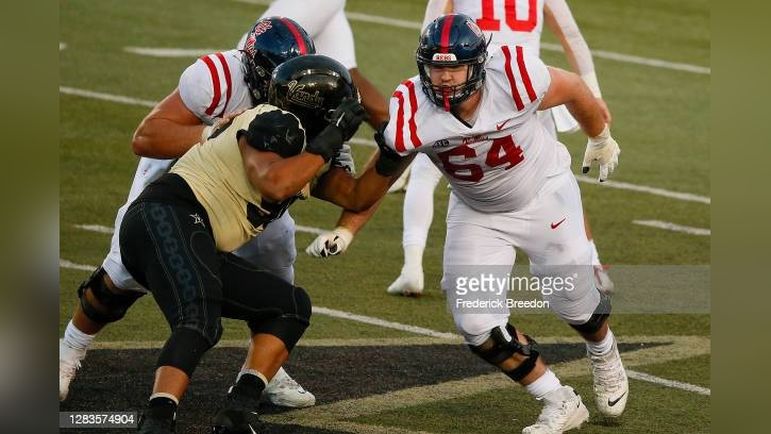 From now until the 2023 NFL Draft takes place, we hope to scout and create profiles for as many prospects as possible, examining their strengths, weaknesses, and what they can bring to an NFL franchise. These players could be potential top 10 picks, all the way down to Day 3 selections and priority undrafted free agents Today, we’ll be profiling Ole Miss OG Nick Broeker.

— Good size and bulk, fills out frame well with a good-sized lower half
— Impressive run blocker, great play strength, and ability to control the line of scrimmage
— Nasty demeanor and finishes blocks, drives feet and wants to put defender into the ground, plays through whistle
— Plays with good base and pad level, shows knee bend in pass and run game
— Good feet to keep base when moving laterally
— Sticks with great grip strength and doesn’t lose blocks when he engages
— Competent puller with good enough snap out of his stance, able to kick out and log, experience with square and skip pulls
— Versatile, tackle/guard experience
— Shows anchor to stall out bull rushes in pass pro, effective use of hop step
— Quality starting experience against top competition
— Football bloodlines

— Lacks tremendous athleticism and has a stockier body type, not a smooth mover
— Played tackle but lacks foot speed to consistently secure edge, tendency to lean and double and waist in pass pro at tackle
— Has to play with consistently tighter hands, will shoot too wide, and forced to re-fit throughout the rest of the rush or blocks
— Struggles with punch against 3Ts who rush across his face and often gives up interior lane
— Played in RPO-heavy system that limited true pass sets at tackle, making evaluation more difficult
— May struggle in more zone-based schemes that ask him to reach and cutoff

— Three-year starter for Ole Miss, 36 in his career
— 23 starts at LT, 13 at LG
— Moved from LT to LG for 2022 season (played nearly 1000 snaps at LG, 20 at LT)
— Played over 200 snaps as a true freshman at LT, played more than 3100 snaps in his career
— Allowed just five career sacks (according to Ole Miss’ scoring/stats)
— Won school’s Kent Hull Trophy, awarded to top Ole Miss’ o-lineman
— Three-star recruit out of Springfield, Illinois, chose Ole Miss over Illinois, Michigan State, and Ohio State among many others
— Played football and basketball in high school, named First-Team All-Metro, named local paper’s Athlete of the Year in 2019
— Caught a 52-yard touchdown in high school, also had a pick-six
— Father, John, played OT/DL at Northwestern, older brother Jack walked on to play o-line at Illinois

Broeker will be attending next week’s Senior Bowl so he was one guy I wanted to check out before the event kicks off. I’m glad I did. He’s old-school and not a super athlete, though not a super limited one either, and a grader in the run game. He’s at his best on man blocks when he can drive, run his feet, and move linemen from Point A to Point B. Some examples of him playing to his size and throwing his weight around.

He’s the LT against Alabama and the LG in all other clips.

Though he lacks great foot speed, he’s able to engage and stick in space, something that not every lineman can do, even more, athletic ones. Broeker plays under control with a good base. LG here.

He has experience at guard and tackle, starting his career at tackle before kicking inside. But inside looks more natural for him. He struggled to seal the edge at tackle, though his pass sets were tough to evaluate with how RPO-heavy Ole Miss’ pass game is, limiting the number of true pass sets he had to take. In pass pro at tackle and guard, he plays with a good anchor and can stall out power rushes. Though he has solid feet, he is prone to getting beat across his face by 3-techs who spike inside. Examples. LG here.

Overall, Broeker is a strong run blocker who will thrive best in a man-blocking/Duo scheme that relies less on zone blocks. He’s a finisher that plays with an edge and mean streak and overall, his technique is good, though he’ll need to consistently fire his hands inside. He doesn’t project to be an all-star but a solid player who can start in the right scheme. Reminds me a fair bit of Luke Godeke from last year’s class.